ABC bears and polar bear evolution – and an adventure

Posted on August 8, 2012 | Comments Off on ABC bears and polar bear evolution – and an adventure

A new genetic study (Miller et al. 2012, in press) suggests that polar bears arose between 4-5 million years ago and thus survived the more than 50 glacial/interglacial cycles of the 2.5 million year Pleistocene epoch. I will explore some of the claims of that paper later, suggesting why we might want to take them with a grain of salt.

But first, a bit of background and my personal caving adventure in ABC brown bear country.

It’s pretty clear that interest in polar bear evolution intensified with the advent of sophisticated techniques for the extraction and analysis of molecular genetic information from ancient samples (bones). Polar bear evolution has been all over the news for at least 3 years now – with the results different each time, depending on the techniques and samples utilized. See, for example, recent papers by Davison et al. (2010), Edwards et al. (2011), Lindqvist et al. (2010) and Hailer et al. (2012).

These recent efforts were spurred on, no doubt, by earlier work that showed a close genetic relationship between brown bears and polar bears, and an unexpectedly close relationship between polar bears and the so-called “ABC” brown bears that live exclusively on three islands in southeast Alaska — Admiralty, Baranof, and Chichagof (e.g. Barnes et al. 2002; Cronin et al. 1991; Talbot and Shields 1996a,b), see map below.

So what are “ABC” bears? Physically and behaviourally, not noticeably different from other coastal brown bears, as far as I understand (see photos below). Genetically, however, they appear to stand out as distinct from other brown bears and are similar in some respects to polar bears. More on that later.

Today’s post is an introduction to this issue, with some notes and pictures from my recent adventures in Southeast Alaska, that included a crawl through a cave that might once have housed ABC bears. 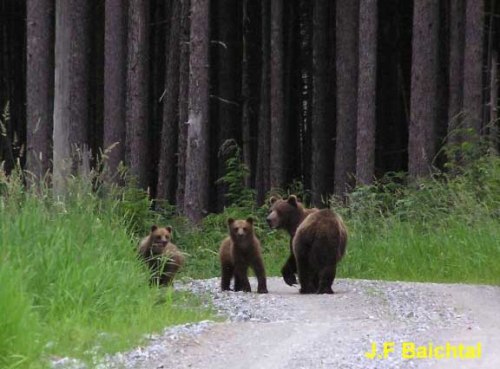 My adventures in SE AK: In 2010, I joined a US Forest Service (Tongass National Forest) geology project to map and photograph coastal caves off the west coast of Prince of Wales (POW) Island, Southeast Alaska (see map and photos below), at the invitation of USFS geologist Jim Baichtal from the Thorne Bay district (who I have co-authored conference posters with).

Map of SE Alaska, courtesy T. Heaton, U. of South Dakota. * marks location of On Your Knees Cave, where many pre- and post-Ice Age (Last Glacial Maximum) brown bear bones were found. On Your Knees Cave is in the general vicinity of El Capitan Cave, which I visited in 2010.
Click to enlarge.

We travelled on the Tongass Ranger (with Forest Service Captain Jake Yearty), from the dock at Ketchikan on the mainland, ’round the south end of Prince of Wales Island and up the west coast. Then we went looking for caves. I ‘helped’ by providing a ‘scale’ for some of the photos (see below) but mostly, I just watched and lent a hand when needed – and hiked, scrambled in and out of boats, and crawled through caves, along with everybody else.

In a Baker Island cave off the west coast of Prince of Wales Island, AK (see map above), I served as ‘scale’ (in the green jacket) for photographer Dave Bunnell.
As the photo below photo shows, I was so useful in this capacity that I managed to be in two places at once (see the green jacket at the entrance and in the foreground?). Actually, this is a composite shot put together by Dave to capture the enormous size of this sandy-floored cavern — looking towards the entrance from the back of the cave.

A different Baker Island Cave from the inside, looking out.
Photo taken by me, without the extra lighting Dave Bunnell used.

The well-preserved brown bear bones from this cave date to the early Holocene, ca. 10,000-12,000 BP (years before present). These are not technically ‘fossils’ because they have not started the process of mineralization. They are more accurately called ‘subfossils,’ but since not many people know or use that term, I’ll use ‘fossil’ like everyone else.

Note, however, that brown bears do not live on POW Island today and the ABC islands sit several islands to the north.

DNA analysis of one of the early Holocene fossil brown bears from a nearby cave on the same mountain, ‘Blown in the Wind Cave’ (dated to 9995 +/- 75 radiocarbon years) closely matches modern ABC bears that now live only on islands to the north (Barnes et al. 2002).[Another early Holocene bear, from ‘Bumper Cave’ on POW, is also an ‘ABC’ bear (Heaton and Grady 2009)].

Many of the brown bear bones from ‘On Your Knees Cave’ on POW (see map above) date to before the Last Glacial Maximum (ca. 27,000 to >40,000 radiocarbon years before present, MIS 3), while others date to the very early Holocene.  See the dates of all the bear remains from the various POW caves here Heaton and Grady 2009_marked

The presence of both pre- and post-LGM brown and black bears in these caves (along with other terrestrial mammals), suggests strongly that a small population of ABC bears survived the Ice Age on POW Island because of its unique position relative to coastal ice sheets.

Knowing that ABC bear populations could survive glacial conditions on POW adds to the importance of understanding the relationship of ABC brown bears to modern and ancient polar bears.

But it turns out there were also ABC-type brown bears in Haida Gwaii (formerly the Queen Charlotte Islands), which lie just south of POW in British Columbia, Canada.  As for POW, Haida Gwaii does not have brown bears today. But so far, none of the bears found on Haida Gwaii predate the LGM.

One of my business partners, Becky Wigen, has identified and described most of these Haida Gwaii bear bones for the Parks Canada archaeologists investigating the sites where these bones were found (through our contracting company, Pacific Identifications Inc.)  The early Holocence dates of these brown bear bones, and those of other terrestrial mammals (including black bear and deer) on Haida Gwaii and POW have been instrumental (along with sea level information) in re-writting the early post-glacial history of the Northwest Coast. I’ll get into that story in more detail another time.

I have to say though, that having crawled through a cave where ancient ABC bears might have lived drove my long-standing interest in polar bear evolution to even greater heights.

I’ll dive into my critique of the Miller et al. paper in my next post.

Heaton, T.H. and Grady, F. 2009. The fossil bears of Southeast Alaska. Proceedings of the 15th International Congress of Speleology 1(1):I-N.

Talbot, S.L. and Shields, G.F. 1996a. A phylogeny of the bears (Ursidae) inferred from complete sequences of three mitochondrial DNA genes. Molecular Phylogeny and Evolution 5:567-575.

Talbot, S.L. and Shields, G.F., 1996b. Phylogeography of brown bears (Ursus arctos) of Alaska and paraphyly within the Ursidae. Molecular Phylogenetics and Evolution 5:477-494.