Where were the appeals to feed starving polar bears in 1974?

The so-called “policy paper” that polar bear biologist Andrew Derocher has been promoting over the last few weeks, which I commented on briefly when the press release came out, is still grabbing headlines. Online news outlets continue to run stories on this bizarre discussion of what officials might decide to do 40 years from now if global warming causes Western Hudson Bay polar bears to spend 6 months on land (Molnar et al. 2010), causing some of those polar bears to starve (see here, here, and here) – as if this is something likely to happen within the next couple of years.

But forget imagined future starvation: where was the media attention on the plight of starving polar bears back in 1974  and 1975 when polar bears were actually starving in large numbers in the eastern Beaufort Sea?

At least two of the co-authors of the paper getting all the attention – Drs. Ian Stirling and Nick Lunn – witnessed polar bears starving in the Beaufort in 1974 because of an especially cold winter and said nothing – even though polar bear populations worldwide at the time were already low due to the wanton slaughter of previous decades. Did Stirling and Lunn humanely euthanize the bears they saw starving? Contact the media? [If they did, I’d like to know.] Appeal to governments to make a plan in case it happened again? Apparently not, because it did happen again, at least twice in the following two decades – with no attendant hue and cry then either. No, those Beaufort Sea bears starved to death, time and time again, without a word to the media from Ian Stirling and Nick Lunn.

Polar bear biologists have known for decades that polar bear populations can plummet when there is an especially cold winter that results in thick shorefast ice in the spring (Stirling and Lunn 1997; Stirling 2002) – I’ve discussed this in previous posts here and here. The devastating effects that heavy ice cover has had on polar bears in the eastern Beaufort Sea (see map below) has been documented for 1974 and 1984, with similar events inferred from anecdotal information for 1964 and 1992. 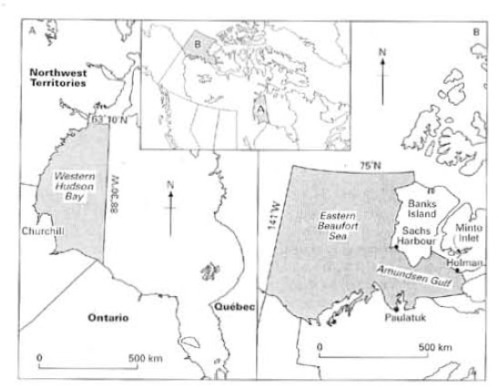 Here is what Stirling and Lunn (1997:177) had to say about the mortality event of 1974 in the Eastern Beaufort that they witnessed (which I cited recently in Featured Quote #29)

“…in the spring of 1974, when ringed seal pups first became scarce, we capture two very thin lone adult female polar bears that had nursed recently, from which we deduced they had already lost their litters. A third emaciated female was accompanied by two cubs which were so thin that one could barely walk. We have not seen females with cubs in this condition in the Beaufort Sea, or elsewhere in the Arctic, before or since.”

And this is what Stirling had to say at the 1979 Polar Bear Specialist Group meeting (Anonymous 1979:52) about his research activities in the eastern Beaufort Sea in the mid-70s:

“…it was apparent from the studies of both polar bears and seals that their populations had undergone marked declines in numbers, productivity, and survival of young in 1974 and 1975. The decline apparently occurred because of natural causes that are not completely understood.”

Polar bears starved in significant numbers in 1974 and again in 1975 – no numbers of deaths for bears have ever been estimated (that I could find), but the decline in ringed seals that caused polar bear numbers to plummet was estimated at 80% or more. With virtually no seals to eat in the spring, a large number of bears – especially females and cubs – must have died of starvation, either that spring or later that year. No cries of “feed the starving polar bears” then – or in the 1980s or the 1990s, when it happened again.

No, apparently the polar bears that starved in the Beaufort Sea in 1974 and 1975 because of heavy ice conditions didn’t need to be saved, even though global population numbers were lower than they are today. No plan was deemed necessary to deal with any future re-occurrence of cold-related starvation – which indeed happened two more times, without interference. But any bear that might die of starvation decades from now because of low ice levels that might occur in Western Hudson Bay is an imminent emergency that governments around the world should be preparing for now. I can only conclude that death by starvation only matters to Derocher and his polar bear biologist colleagues when the cause can be attributed to global warming – or perhaps, only when the death by starvation occurs near Churchill, where the media, conservation advocates and Hollywood stars can be counted on to capture it on film and express their horror.