Posted on May 25, 2013 | Comments Off on Buffet time for polar bears – spring/early summer is for eating baby seals

Spring is the busiest and most important season for polar bears: it is the most important feeding period and it is also when mating occurs. The fat that polar bears put on during the spring and early summer is critical for their survival over the rest of the year and for females, determines whether they can successfully produce cubs the following year.

Mothers and new cubs emerge from their winter dens in late March to early April and those who have chosen to den on land soon head towards the sea ice. For a fabulous photo of a polar bear female and her two young cubs, just out of their winter den, feeding on a bearded seal pup, pop over here. All other bears, including females with older cubs, will already be on the ice, feeding on the first newborn ice seals of the season and any other seals they can catch.

It’s buffet time for polar bears but the most dangerous time for cute baby seals.

Ringed seals are most likely to be encountered and eaten by polar bears. While they are the smallest of the ice seals, they are the most abundant and are found throughout the Arctic. The global population has been estimated at 3-4 million (Kelly et al. 2010). However, there are also much larger bearded seals scattered throughout polar bear territory and while they are much less abundant than ringed seals, polar bears eat them when they can.

[While it is true that both bearded seals and ringed seals were recently listed as ‘threatened’ by the USA, there is no evidence that either species has declined in abundance in recent years: the ‘threatened’ status established by the ESA is based entirely on computer model projections of what might happen in the future due to increasing atmospheric CO2. In contrast, the IUCN classifies both species as ‘least concern’ (see previous post here).]

In addition, depending on where in the Arctic polar bears find themselves, a number of other less abundant ice seal species are also available: in the west (e.g. Bering, Chukchi, and Beaufort Seas), there are ribbon and spotted seals (and see References below) and in the East (Davis Strait, around Greenland, through to the Barents and beyond) are harp seals and a few hooded seals.

Polar bears will often eat only the fat from a seal they have killed, especially in the spring and early summer when fat newborn seals are abundant – see Fig. 1 below. Biologists suspect that polar bears may be able to live entirely on fat. Not only is fat high in calories, it does not require water to metabolize. Digestion of fat releases water, which may be useful in an environment where free water is often available only as snow and ice (Amstrup 2003:592).

Figure 1. The ice seal species consumed by polar bears, pictured at or close to weaning age when they may be 50% fat by weight. Ringed seals are consumed the most often, with bearded seals the second – other species are consumed if encountered but they are much less common and occur only in particular areas. The banana is a reminder that polar bears usually eat the fat of seals first, pealing the skin off the body and consuming the underlying fat. When seals are abundant, adult bears may not eat any more than the fat, leaving behind the carcasses – which are then available for younger bears and arctic foxes.

Fat is crucial to Arctic animals. The milk of Arctic seals has an extremely high fat content. As a consequence, their newborn pups gain weight very quickly and are weaned quickly. Average seal nursing times below in bold, average birth dates in red:

Seal pups are about double their birth weight or heavier by the time they are weaned, when they may be 50% fat by weight (male seals hang around the mother-pup pair and mate with the female around the time the female stops nursing) – the perfect meal for fat-craving polar bears.

You can see by the above dates that at this point in the year (late May), we are just past the period of greatest abundance for just-weaned ringed and bearded seals (since most are probably born around early April and late April, respectively). Even in Hudson Bay and the northern Bering Sea (including around St. Matthew Island, see previous post here), there is still lots of sea ice providing a hunting platform for polar bears (Figure 2, below). 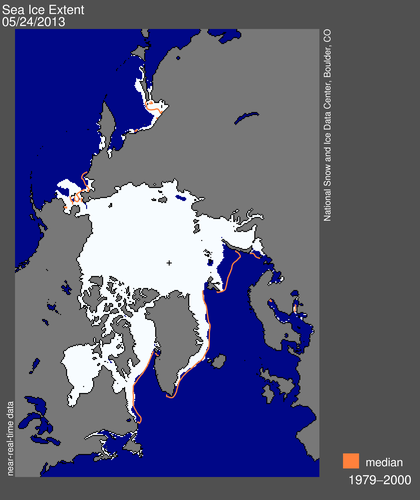 There will still be super-fat, newly-weaned seal pups after this peak period, of course – they might be just a bit harder for polar bears to find. And as the surviving young pups learn how to feed themselves over the next few months, they remain easier for polar bears to catch than adults because of their lack of experience evading predators.

Here is what polar bear biologist Steve Amstrup (2003:592) has to say about the spring feeding:

“In some areas, predation on pups is extensive. Hammill and Smith (1991) estimated that polar bears annually kill up to 44% of new born seal pups if conditions are right.”

Both polar bears and Arctic seals need ice in the spring: polar bears for hunting, seals for nursing pups and mating. Even if sea ice declines to levels seen last year (2012), we should see plenty of ice remaining as a hunting platform for polar bears until the end of June – see the ice extent graph below (Figure 3). Fig. 4 shows ice extent at 27 June 2012, while Fig. 5 shows, for comparison, the extent at 30 Jun 2009 (the latest year that breakup dates for western Hudson Bay have been calculated, see previous post here).

Figure 5. Sea ice extent at June 30, 2009 (NSIDC), the year that polar bears in western Hudson Bay had ice for hunting well into August (as late as in 1992), see previous post here.