Posted on August 29, 2013 | Comments Off on Ten out of ten polar bears being tracked this summer in the Beaufort Sea are on the ice

Tracking Beaufort Sea polar bears over the summer — what can it tell us about how important the position of summer sea ice relative to the shoreline in this region is to these bears? Do Beaufort Sea bears get stranded on shore like the polar bears in Davis Strait and Hudson Bay?

Polar bear biologist Eric Regehr (with the US Fish & Wildlife Service, or FWS) has a team working with US Geological Survey researchers (USGS) in the southern Beaufort tracking where adult female polar bears go throughout the year. This is part of on-going research in the Beaufort and Chukchi Sea (see previous post here; see also Fish & Wildlife 2009; Polar Bear News 2010 and 2013; Rode and Regehr 2010, pdfs below; and just out, the “accepted” version of the Rode et al. paper discussed here, and announced in my last post here).

The researchers have been posting a summary map at the end of each month on the USGS website showing the tracks of the females they fitted with radio collars the previous spring — for 2013, and back to 2010. They can’t put collars on male bears because their necks are larger around than their heads, so a collar would just slip off.

I’ve posted the July 2013 track map below, which shows all ten bears out on the ice, and the previous month (June 2013) to compare it to (the August map should be out shortly). I’ve included a few maps from 2012 to allow you to compare this year’s results to the situation last summer.

The August tracks should be available after the Labour Day weekend – check back next week to see where the bears have been this month. I’ll post the map here or you can go to the USGS website directly. [UPDATE Sept 4, 2013: The August map is up, posted here.]

This is how the tracking process is described:

“The USGS Alaska Science Center uses the latest technology in satellite radio-tracking to fill key information gaps on how polar bears use both the sea ice and land. Adult female polar bears are captured, fitted with satellite telemetry collars, and followed throughout their annual range. In collaboration with the U.S. Fish and Wildlife Service we are also experimenting with glue-on and ear tag satellite transmitters, which can be deployed on adult male bears and younger, still-growing bears.” 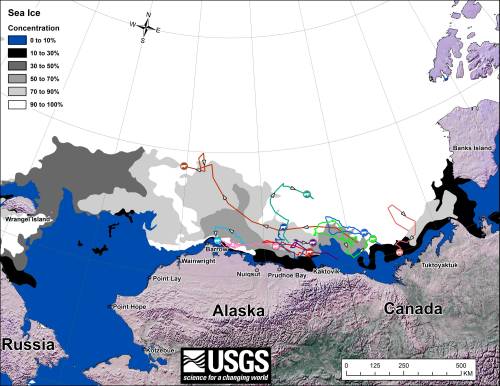 Figure 1. Movements of 10 satellite-tagged polar bears for the month of July, 2013. Polar bears were tagged in 2013 on the spring-time sea ice of the southern Beaufort Sea. All 10 of these bears have satellite collar transmitters. Polar bear satellite telemetry data are shown with Ice Analysis charts from 29 July, 2013. Ice Analysis charts are made available by the National Ice Center. The land cover is made available by Natural Earth [this is the original caption]. Click to enlarge. 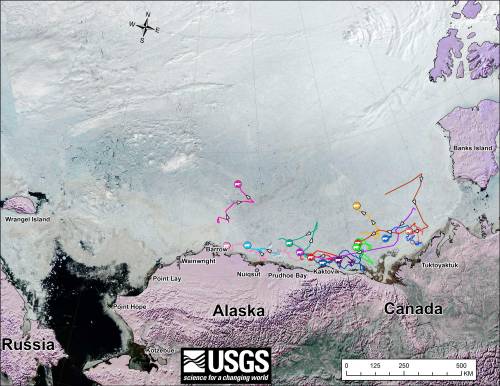 Figure 2. Movements of 13 satellite-tagged polar bears for the month of June, 2013. Polar bears were tagged in 2013 on the spring-time sea ice of the southern Beaufort Sea. Three bears followed here don’t appear in the July track – their collars might have stopped working or fallen off (most likely), they might have left the area entirely (also possible) or they might have died. The researchers don’t say [no caption provided for original]. Click to enlarge.

How does this summer compare to last year, when the ice level in September reached its lowest point since 1979?

At the end of July 2012 (Fig. 3), all 10 bears with collars were on the ice. By the end of August, after a huge cyclone ripped through the Arctic earlier in the month (Fig. 4), seven out of eight remaining bears with collars were on the ice and one was on shore (almost certainly in a maternity den). The two missing ones might have had their collars fail (most likely), or they might have left the area entirely (also possible), or they might have died.

Figure 3. July 2012. Ten bears with collars at this point, all of them on the ice. Click to enlarge.

Figure 4. August 2012. Eight bears with collars, seven on the ice, one on shore. Click to enlarge.

Maps for other months, back to 2009, are available here.

Keep in mind that when the ice is moving (retreating away from the coast in summer, advancing toward the shore in fall), some of the onshore/offshore movement of the tracks over the course of the month may reflect the bears attempting to stay with the ice edge as it moves.

Research on bears in the mid-2000s that looked at polar bear swimming prowess in open water in the Beaufort Sea (Pagano et al. 2012) is pertinent to these maps (Featured Quote #38 posted April 25, 2013):

“…most of the long-distance swimming events that we identified involved bears swimming from unconsolidated sea ice to the main pack ice or to land.”  [in other words, not from land to the ice]

To put all this into perspective, note that research in this region between 2000 and 2005 determined that, on average, only 3.7% of all Southern Beaufort polar bears spent time on land between mid-September and the end of October (Schliebe et al. 2008). As the estimated total population at that time was 1,526 bears (and still is), it means that on average, only about 56 bears spent time on land each summer in the early 2000s.

Research to keep an eye on, I’d say.