Polar bears at Kaktovik, Alaska not stranded due to retreating ice

Posted on September 30, 2013 | Comments Off on Polar bears at Kaktovik, Alaska not stranded due to retreating ice

“I’ve lived here all my life and there are more bears every year. I read stories about polar bears being on the brink of extinction because of global warming, look out of my window and start to laugh.” Tori Sims, Kaktovik (Mail on Sunday, Sept. 28, 2013).

As you can see, Kaktovik is in the news again. This tiny community sits on the edge of the Beaufort Sea, on Barter Island on the North Slope of Alaska (Fig. 1). It lies within the Southern Beaufort polar bear subpopulation, which has been classified as “declining” by the IUCN Polar Bear Specialist Group (Obbard et al. 2010).

The determination of “declining” was based on a small dip in population numbers between 2001 and 2006 (not statistically significant), plus a decline in body size and condition, and smaller litter sizes documented between 1986 and 2006 (Rode et al. 2010). A new population survey is underway. 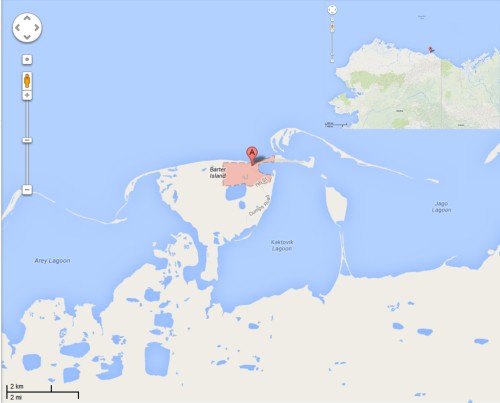 There have been suggestions that bears become “stranded” along the Alaska coast near Kaktovik because of retreating sea ice, and that more bears present in this area in recent years are an indication that they are in trouble due to global warming.

I’ve compiled some quotes, maps, and links to stories, photos and videos about Kaktovik polar bears to show that this claim is false.

If you want to get a sense of what Kaktovik, Alaska looks like, have look at the photos taken last year (on September 7, 2012) that accompany a short essay by Ben Anderson and Loren Holmes (Alaska Dispatch, September 22, 2012). They say:

“Every year, dozens of polar bears flock to the Arctic Alaska community of Kaktovik, lured by the potential for feasting on the remains of whales taken during traditional subsistence hunts. …

Kaktovik is a small village sitting on Barter Island, abutting the Beaufort Sea on Alaska’s north coast. About 250 people populate the community, and many still depend on the fall whaling hunts to provide enough food to get them through harsh winters. But even the best-harvested whales have scraps left over, and that draws the bears.

On any given day, dozens of polar bears can be spotted hanging in or around the community, and 2012 set a record for the most bears seen in a single day at 80. The reasons for the fluctuations in bear numbers aren’t yet entirely clear, though scientists are investigating whether a longer season of melting sea ice may hurt the animals.

But it’s not all business when it comes to polar bears in Kaktovik. The island has also become a popular hotspot for journalists and tourists anxious to see and snap photos of the bears in an environment where they’ll occasionally wander into town.” 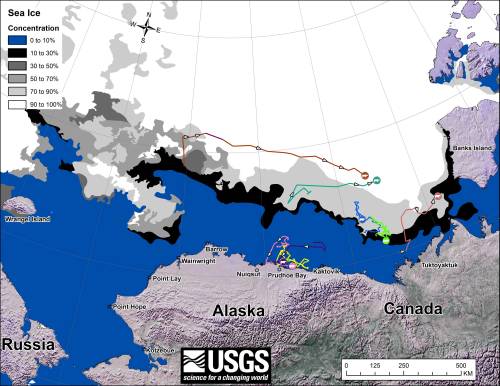 Figure 2. Movements of 8 satellite-tagged polar bears for the month of August, 2013 in the Southern Beaufort. Kaktovik is just to the right of Prudhoe Bay. Out of eight females with collars, five were on the ice and only three were on shore in August. All were on the ice in July. More details here and here. Click to enlarge

A story in the Guardian in 2011 (November 16, 2011, “Stranded polar bears at Kaktovik, Barter Island, Alaska – in pictures”) made the following claim:

“During the summer, many polar bears gather to rest and feed on hunter-harvested bowhead whale remains near Kaktovik, on Barter Island. But in recent years, dozens – possibly hundreds – of bears are becoming stranded on the coastal plain because they cannot reach the retreating sea ice.”

Nonsense. Polar bears are not “stranded” on shore because of the retreating ice: a small percentage choose to stay onshore, some choose to go out with the retreating ice. One study (Schliebe et al. 2008) found that from 2000-2005, an average of 3.7% of all bears were on shore for all or part of the early fall and the rest were on the pack ice. They say:

This phenomenon is evident from the maps of tracks of bears fitted with radio collars by US Geological Survey biologists (Fig. 2), discussed in two previous posts here and here. Bears have a choice when the ice starts to recede in late July/early August: they can stay on land and scavenge whale carcasses and other carrion until the ice returns, or stay on the ice and continue hunting.

“In the village of Kaktovik, 600 miles north of Anchorage on the shore of the Arctic Ocean, villagers hauled in a whale Thursday. It was a bowhead. The third and last whale of the season.

After it was killed, they towed it to shore. Then the children climbed on it and a biologist took measurements and samples. After that, they rinsed it with seawater and began to butcher with “big, huge knives,” Flora Rexford, a 27-year-old teacher in the village, told me Friday morning by telephone.

That’s when the polar bears waiting on a barrier island not far off shore, slid into the water.

“Once they start cutting, the bears start coming across,” she said.

Once one side of the animal was removed Thursday, the men turned the carcass and began carving the meat from the other side. By then the bears were prowling around, she said. Villagers distracted them by throwing scraps and shot cracker shells that make noise and bright light, Rexford said.

“You just got to keep your eye out. Everybody knows that the bears are coming,” she said. “You just have to keep them away from the people cutting the whale.“

Lastly, and most recently, we have the article with photos (taken late last week, ca. Sept. 26/27) from the Mail on Sunday (Sept. 28, 2013) — the piece that my leading quote was taken from: “The poster boys of climate change thrive in the icy Arctic: Polar bears defy concerns about their extinction.”

“Last week I travelled to Kaktovik, Alaska – an Inupiat village of 239 hardy souls on Barter Island at the edge of the Arctic – which has become an unlikely boom town thanks to an influx of polar bears.

Village administrator Tori Sims, 26, beamed as she told me: ‘This has been a great year for the bears.

‘They are fat, happy and healthy. We’re seeing a boom in tourism which brings much-needed revenue to the village and helps us continue to live the traditional life we cherish.

‘I’ve lived here all my life and there are more bears every year. I read stories about polar bears being on the brink of extinction because of global warming, look out of my window and start to laugh.’

In Kaktovik, bear numbers are embraced in the South Beaufort Sea sub-population and the most recent study by the US Fish & Wildlife Service in 2006 reported that numbers had dropped from 1,842 bears to 1,525 over the previous five years.

A new study is under way with a report due early in 2014.

But on Barter Island it is a more positive story: official figures have fluctuated from 51, when records started in 2002, to a pitiful ‘low’ of only 18 bears in 2010.

But there were a record 80 bears recorded last year and this year US Fish & Wildlife puts the figure at 58, though locals believe it is higher.

Carla Sims Kayotuk, who heads the ‘nanook patrol’ which keeps the bears out of the village in Kaktovik, said: ‘Bears come and go. They are notorious for going long distances.

‘Authorities say there are 58 but that’s just what they counted here in Kaktovik. They also monitored a wider area from the air and counted 91 bears.’”