Not much change in sea ice coverage since last week – most of Hudson Bay is still covered with concentrated ice, which is good news for Western and Southern Hudson Bay polar bears. They are still free to roam and hunt over most of the ice-covered bay. 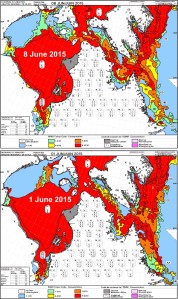 There may be slightly less ice than average for this time of year (Fig. 1, below) but coverage is still >70% with concentrated ice and does not appear to be melting quickly (see charts above and Fig. 2, below).

The dates for three previous earliest breakups according to Lunn and colleagues (Fig. 3) have come and gone, as all were in the first week of June (more on that in an upcoming post) – no records broken. More graphs and maps below, see previous posts here and here.

Below are the breakup dates according to Lunn et al. (2013) for Western Hudson Bay, defined as the date when sea ice reaches 50% coverage (calculated over a grid):

Note the amount of ice in each of the three coloured areas and see that in 2015, there was less open water in Hudson Strait (magenta) and eastern Hudson Bay (yellow) than there was in 2009 – despite the larger area of open water in NW Hudson Bay in 2015 than either 2009 or 2011.