Same amount of sea ice for Hudson Bay polar bears as 2013, bears still on the ice

Sea ice coverage for Hudson Bay on 14 June converged on levels recorded in 2013, when breakup was slightly later than the average of the last two decades.

There is also more ice over Hudson Bay than there was in 2011, which was an early breakup year (charts for other Arctic regions here, originals here).

Andrew Derocher notes (via twitter) that rather than heading to shore, most of the Hudson Bay bears with satellite tracking collars (7/10) are out on the ice (Fig. 1 below). They appear to be hunting along the ice edge, where they are most likely to find seals.

Update 17 June 2015: Sea ice images for the week 18 June 2015 compared to other years added below, for Hudson Bay and the Beaufort Sea.

Figure 1. Seven out of ten Hudson Bay polar bears with tracking collars are out on the sea ice, along the ice edge. At least one appears to be utilizing shorefast ice near Churchill and one lone bear is off on a journey to Davis Strait, hunting on the remaining sea ice there. Original here. Click to enlarge.

See the entire region below:

Across the entire Arctic, there is less sea ice than usual in many areas but that doesn’t mean there’s no ice – in fact, there is still a lot of ice that’s 40-60% concentration in all polar bear subpopulation regions.

At this time of year, bears undoubtedly move around to find the right hunting conditions – where seals are plentiful and the ice conditions conducive to catching them – as they’re known to do earlier in the spring.

Biologist Jack Lentfer (1983:287) described movements of polar bears in relation to sea ice conditions during the late 1960s and early 1970s. Note that both seals and bears are attracted to areas of young ice and open water:

Bears probably disperse from commonly used areas when ice conditions reduce availability of ringed seals, their main food. As an example, in March and early April 1971, ice in the north study area was predominantly multi-year with exceptionally few open and recently frozen leads. Ringed seals were less evident and there were fewer polar bears than in years when ice conditions were more normal. During the same period, the west study area had about the same interspersion of multi-year ice, young ice, and open water as in most years. Seals were common and bears more abundant than most years, suggesting that animals had moved from the north toward the west area. Following storms and high winds in mid-April, the ice in the north area became more open, seals were evident, and bears were present again in good numbers, suggesting that bears respond quickly to local habitat changes. [my bold]

Note that “young ice” is defined by NSIDC as being 10-30 cm thick (like the 20 cm thick ice used by the Svalbard bear that killed and ate white-beaked dolphins last year, described in my last post).

Figures added 17 June below, showing how much more ice there is in the Beaufort Sea this year than in 2008 and 2012 (Figs. 4 and 5), and the age of remaining ice in the eastern Beaufort/Western Canada, and the ice concentration across the entire Beaufort (Fig. 6). 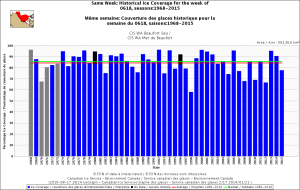 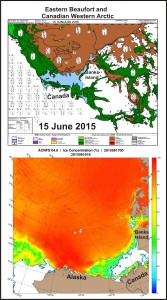