Posted on May 24, 2016 | Comments Off on Polar bear hybrid update: samples sent for DNA testing to rule out blonde grizzly

That putative polar bear hybrid shot in Arviat last week has been sent for DNA testing. 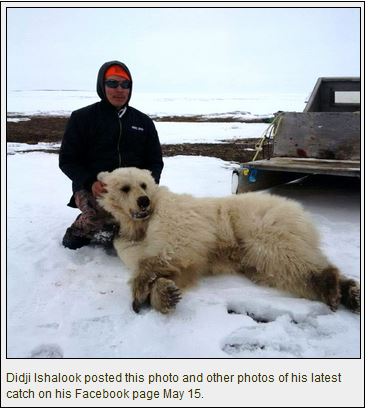 Just out from NunatsiaqOnline (24 May 2016): Nunavut biologist sends possible “grolar” bear DNA for analysis: Unusual bear killed in Arviat could just be a blonde grizzly bear

Additional details confirm the animal shot was a female, which could account for the fact it was described as “small”. The Nunavut biologist who sent in the sample for testing warned it could also be a blonde grizzly, as I pointed out last week.

UPDATE 24 May 2016: Comments added below from a Toronto Star news report below on the hybrid identity of this animal.

“But while the bear looks to be a hybrid of a grizzly and polar bear, Nunavut’s carnivore biologist said May 19 that it’s up to DNA tests to confirm or deny that.

“In grizzly bears, you can get fur colour ranging from brown to blond to nearly black,” said Malik Awan from Igloolik.

The Government of Nunavut sent samples May 18 to a lab in British Columbia, Awan said.

“We’re trying to process it quickly so we can share that information with the public,” he said.

Nunavut hunters have seen an increase in grizzly bears since at least the 1990s, particularly in the coastal mainland, including areas around Arviat, the biologist said.

“We have reports from hunters on occasion that grizzly bears venture faon to sea ice in the spring to scavenge from polar bear kills or hunt newborn seals,” Awan said.”
[my bold]

And as I reiterated in my post yesterday (Five facts that challenge polar bear hybridization nonsense), these grizzlies seen around coastal areas of western Hudson Bay (including Arviat and Churchill), had to have come from the north because there are no grizzlies to the south (see map below, data behind it in yesterday’s post). 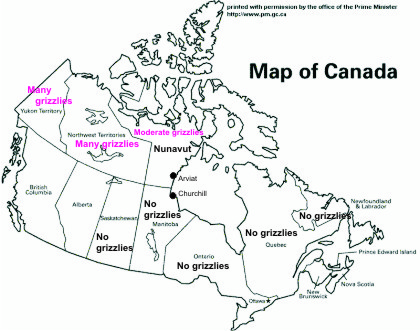 Grizzlies are moving south into these areas as their populations increase due to conservation protection measures, not north as claimed here and here.

UPDATE 24 May 2016: See also this  23 May 2016 Toronto Star report (Did Nunavut hunter shoot grizzly-polar bear hybrid?), which contains two relevant quotes about the identity of this animal, including this one from polar bear biologist Ian Stirling:

“I think it’s 99 per cent sure that it’s going to turn out to be a hybrid,” said Ian Stirling, an emeritus research scientist with Environment Canada and adjunct professor at the University of Alberta.”

In contrast, the comment attributed to Andrew Derocher was more circumspect:

“He said that Ishalook’s bear does not appear to be an albino grizzly. If it is just a very blonde grizzly it would be the palest he has ever seen. But its claws appear to be longer and more “grizzly-like” than other hybrids that have been caught and examined.

“We haven’t done the genetics on this and, until we do, we won’t really be able to say anything conclusively,” Derocher said.”