Posted on March 26, 2017 | Comments Off on Exposing the failed polar bear scare to a an enthusiastic and influential audience

I’ve just returned from a few days in Washington DC, where I presented the details on the global warming icon that refused to die as modeled (see my slide #12 below) to an enthusiastic and influential audience at The Heartland Institute‘s 12th International Climate Change Conference (ICCC-12). 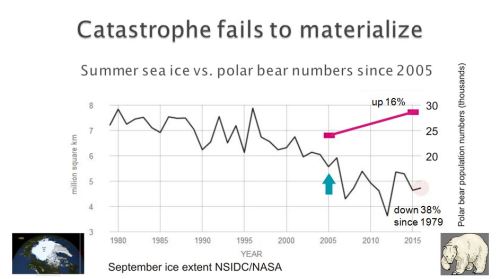 Polar bear science got some long overdue scrutiny by a large number of people at this meeting. Not unexpectedly, a good many folks were surprised and outraged to learn how the polar bear/sea ice situation has actually unfolded compared to the predicted outcome and on-going media hype.

I spent more time than I expected giving interviews (several that were video taped) – with the first request coming 2 minutes after I walked into my hotel room after check-in!

I also spent as much time as I’d hoped signing copies of my polar bear science books (see sidebar) and talking to purchasers, with dozens of copies sold of each. EATEN got some deserving attention as well, because who doesn’t love a good, nightmare-inducing thriller?

I had many fabulous discussions with a variety of scientists from other fields and political policy folks (including a number of high profile movers-and-shakers), as well as with informed members of the public and journalists. Several in-depth talks over drinks and dinner were especially fun and informative.

I unfortunately missed connecting to a few followers of PolarBearScience I was watching out for but did catch some of them: it was great to meet these strong supporters in person.

A great success from my perspective. I look forward to pursuing some of the ideas discussed as well as plans for future meetings.

See my talk (Thursday Ballroom AB, Panel 3a) and others here.