Posted on December 5, 2019 | Comments Off on Ryrkaypiy ‘over-run’ by >50 polar bears is probably due to more Chukchi Sea bears

A scary-sounding headline from the BBC today screams “Ryrkaypiy: Far-north Russian village overrun by polar bears“. A little research would have shown (as I do below) that this sort of event is not unusual for this village, there is adequate sea ice off the coast to allow polar bears to hunt for seals if they choose to do so, and the photos provided do not support the claim that almost all of the polar bears “appeared to be thin” (see photo below and others). Similar incidents happened in 2013 and 2006. Increasing numbers of Chukchi Sea polar bears is the most plausible explanation for the recent abundance of bears at this village.

BBC headline, 5 December 2019. Does that look like garbage these fat bears are feeding on or the frozen remains of dead walruses at the base of the Cape Schmidt cliff?

UPDATE 8 December 2019: A Daily Mail version of the same story (6 Dec) confirms the photo above is of bears feeding on walrus remains (not garbage) and has many more photos (plus a video) of a large number of bears, not a single one of which that I saw was ‘skinny’ (see quotes from the story below). See also the Siberian Times version (6 Dec) with the same pictures. My source for the story was an article published by the BBC, which ran the day before (5 Dec).

UPDATE 9 DECEMBER 2019: Now it’s apparently 63 polar bears threatening the village of Ryrkaypiy on the Chukotka coast, according to the Siberian Times yesterday and repeated by the Daily Mail (with more pictures and video). Russian media getting lots of mileage out of this one. The story now says the bears are feeding on “seals”, not walrus (to deflect attention over their long history of walrus/polar bear problems? Or just a bad translation?). Both stories repeat the claim that most of the bears are “skinny” despite the photos showing just the opposite: lots of fat, healthy bears.

Also, uniquely (and rather bizarrely), the Daily Mail piece claims the bears are being deprived of the “fish” they should be consuming:

“Instead of hunting for fish in deeper waters , the bears are eating seal carcasses left in autumn.

Last year army servicemen cleared the village’s shore of remains of dead seals on which the bears are feeding.“

Obviously written by someone who knows absolutely nothing about polar bears, who rarely, if ever, eat fish and certainly would not be eating fish at this time of year. Sea ice map below for 8 December 2019 from the Alaska Sea Ice Program for 8 December shows, as noted below, that there is enough ice offshore for the bears to hunt seals if they chose to do so (since eating long-dead walrus is much easier than going hunting):

UPDATE 14 December 2019: Apparently, the number of invading bears is now 72 (number gets higher every time someone asks, even though they are still talking about “about a week ago”: who exactly is doing the counting?), according to a story today in The Times (UK). Residents say they move walrus carcasses “away” from the village to a “feeding point” for the bears but it’s apparent the distance is insufficient to prevent problems with bears coming into town. While a local cleaner working for the polar bear patrol (well indoctrinated by the WWF who sponsor the program), proclaims the problem is “definitely” due to climate change, there is finally the admission in this article that the bears coming into town are young bears driven away from the walrus carcasses by larger, older animals (i.e. intra-specific competition). This piece also has a few new photos, including one (below) of fat bears getting into garbage (still no photos of the so-called “skinny” bears said to dominate this “invasion”) and also is the first I’ve seen that doesn’t state that there is no sea ice (only that the ice extent is lower than usual). Some progress, but balanced by the hype promoted earlier this week (at “Treehugger” – what a surprise) by former WWF activist Geoff York (now at Polar Bears International), who is still blaming this incident on lack of ice. 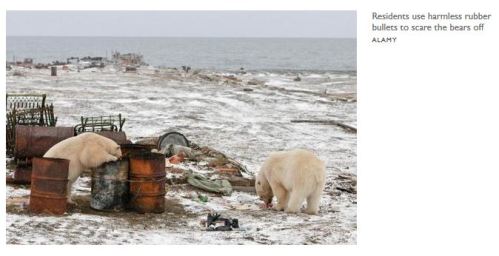 Location of Ryrkaypiy, as provided by the BBC.

Recent scientific studies have shown Chukchi Sea polar bears are in excellent condition and reproducing well despite recent declines in summer sea ice and there is no scientific evidence that this situation changed markedly this year (Adam et al. 2019; AC SWG 2018; Regehr et al. 2018; Rode et al. 2014, 2018). The latest survey estimated about 3,000 bears in the Chukchi Sea. On the contrary, there is every reason to suggest that more polar bears visiting Chukotka settlements in recent years is due to growing numbers of bears – as I suggested earlier this year for the rising problems with bears in Labrador. In other words, as was true in the 1980s, seeing more bears often means there are more bears.

Apparently, the BBC simply passes along all sensational claims made by WWF personel without any fact checking at all (5 December 2019), not even to press the informants to provide precise dates for these events (my bold):

“More than 50 polar bears have descended on a village in Russia’s far north.

All public activities in Ryrkaypiy, in Chukotka region, have been cancelled, and schools are being guarded to protect residents from the bears.

Conservationists say climate change could be to blame, with weak coastal ice forcing the bears to search for food in the village rather than at sea.

The animals were “both adult and young… there were females with cubs of different ages”, she said – adding that almost all of them appeared to be thin.

“If the ice were strong enough the bears, or at least some of them, would have already gone to sea, where they could hunt for seals or sea hares,” he said.”

Anatoly Kochnev told Tass news agency that polar bear visits are increasingly frequent – and that just five years ago [2014], only about five bears got close to the village.

“I as a scientist believe [Ryrkaypiy village] should not remain there,” he said. “We try to control the situation, but nobody would want to think what may happen there in three to five years.”

Biologist Anatoly Kochnev, described in this pieces as “a polar bear specialist from the US-based Institute of the North” – i.e. the Institute of Biological Problems of the North – is the same Russian local who acted as scientific advisor to the Netflix film crew that lied about polar bears being involved in the deaths of walrus falling from a high cliff near Ryrkaypiy (see posts here, here, here, and here) and who earlier this week claimed dire consequences will surely come to a polar bear with the number “T-34” spray-painted on its side recently spotted in Chukotka by WWF members stationed there. Referring to a point only five years ago when there were few bears (2014) is a convenient bench mark that allows him to ignore the fact that the year before that, in 2013, the village had more than 40 bears to contend with, and that in 2006 there was also a large influx of bears (details below).

Ryrkaypiy is located the base of a spit where walrus herds have congregated every few years in the fall, since at least 2007. Walrus numbers are way up compared to what they were in the 1990s and the size of herds that have come ashore in recent years have been rather astonishing. The map below shows the town (where the “Google” label sits) just a little over a mile from the cliffs where the infamous Netflix and BBC walrus videos were shot in 2017 (oddly, this is not mentioned in this latest BBC piece). A mile is nothing for a polar bear: bears that ‘normally’ hang out on the spit are close enough to the village to cause trouble if they are so inclined. 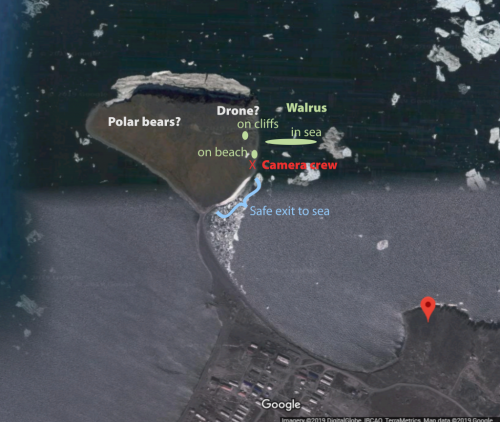 Here’s another view of the village, as seen from the spit littered with walrus carcasses (moved around by storms), taken on 27 September 2017 by Chukotka resident Yevgeny Basov :

In 2013, “more than 40” polar bears were reported to be threatening Ryrkaypiy residents because they were drawn to two whale carcasses washed ashore nearby:

“Forty-three predators have gathered together near the village of Ryrkaypy, according to WWF Russia. Polar bears were spotted near the remains of two dead whales, washed onto the beaches several kilometers away from the Chukotka settlement.

“The last time a large number of polar bears gathered in one place was discovered on the Arctic coast of Chukotka in the fall of 2006,” head of the Polar Bear Patrol WWF project Viktor Nikiforov said.”

“…Ryrkaypiy, a tiny village located on the northern coast of Chukotka bordering the Chukchi Sea. According to a report by the Siberian Times, 5,000 walruses recently hauled out on a shoreline near the village. The walruses were followed by about 20 polar bears, no doubt drawn by the stench of thousands of blubbery, flippered meals.

The arrival of the bears caused the walruses to panic, and many attempted to
flee. Per the Siberian Times, “several hundred” fell to their deaths off the cliffs of the nearby Kozhevnikova Cape. The bears, naturally, went to town on the carcasses.”

In 2007, polar bears descended on the village after a massive herd of 40,000 walrus spent time on the spit that fall, leaving more than 500 carcasses on local beaches from animals that had died naturally from falls or trampling. Later that fall, a Swedish WWF conservation officer named Tom Arnbom spent time in Ryrkaypiy and on a blog post dated 28 November, predicted that polar bears would cause a lot of trouble over the first few weeks of December as they moved in to feed on the carcasses.

Sea ice charts from NSIDC Masie show that as of 4 December 2019 (the date of the BBC article) there was sea ice along the Chukotka coast. The archives show it has been there for weeks. It is not a wide expanse of ice but similar to the strip of newly-formed ice that forms along Hudson Bay which allows polar bears there to resume hunting in the fall. Polar bears need an ice-edge to hunt seals, not miles of unbroken ice. Ryrkaypiy is just east of the W180th parallel marked on the map that transects Wrangel Island.

And was sea ice lacking along that coast in early November 2013, when more than 40 bears beseiged the village? Absolutely not, as the map below shows (for the 11 November, date of the news report):

Bottom line: This year’s event was not markedly different from the influx of bears that terrorized the village in 2013 and 2006. Lack of sea ice caused by human-caused global warming is not causing increasing numbers of polar bears to congregate around Ryrkaypiy in the late fall. A combination of increasing numbers of bears plus an abundance of walrus that have died of natural causes earlier in the year are almost certainly the proximate cause. Carcasses of walrus and dead whales are an attractive source of food for polar bears who must replenish fat they have lost over the summer before the cold and darkness of winter sets in.  These sources of fat are just as useful to bears for that purpose as seals, just easier to access. Smart bears.