Posted on December 20, 2020 | Comments Off on Polar bears again attracted to Russian town by dead walrus Attenborough blames on no sea ice

In the news again: Cape Schmidt (on the Chukchi Sea) made famous by Sir David Attenborough’s false claim that walrus fell to their deaths because of lack of sea ice due to climate change when a clever polar bear hunting strategy was actually to blame. 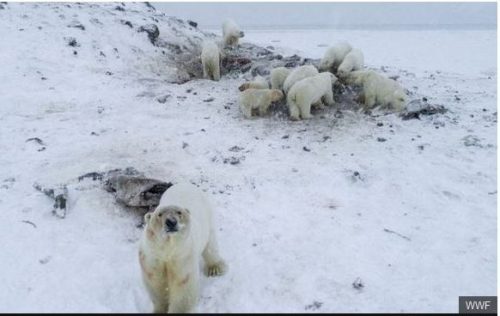 Last year in December (above), some bears were feeding at Ryrkaypiy’s garbage dump and wandering around town after being displaced from feeding on walrus carcasses by bigger, stronger bears on the nearby point.

This year, the town has managed to keep the bears out of town, so while the residents are having no real problems, more than 30 bears have been spotted near town, almost certainly feeding on natural-death carcasses of walrus along the shore (see photo below from 2017 where Ryrkaypiy can be seen in the background). 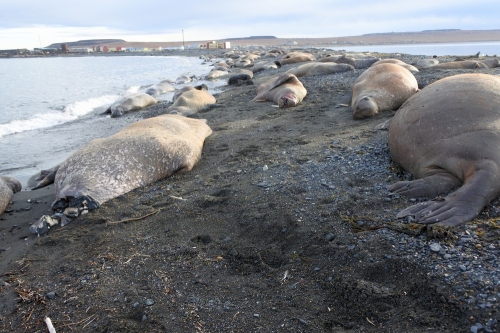 Almost 30 polar bears have come within a touching distance to the village of Ryrkaypiy in Chukotka. The animals have been peaceful so far, the WWF Russia told TASS.

“The small village of Ryrkaypiy in the west coast of Chukotka is approached by a few dozens of polar bears. The WWF Russia bear patrol brigade is handling the situation and is not letting the predators to enter the village,” the statement reads.

It is noted that the patrol counted around 30 bears today, they are behaving in a peaceful manner. “These are just the ones who could be seen with binoculars, there are likely more animals,” the press service explained.

In response to this report, polar bear specialist Andrew Derocher insisted that the only reason that these Chukchi Sea polar bears would be scavenging is lack of sea ice (below):

There's only 1 reason why so many polar bears would be around a village in December: lack of sea ice. Polar bears prefer hunting seals to scavenging & typically leave land once sea ice is available. pic.twitter.com/30urBjXdoq

However, ice charts for the 10th of December, almost one week before this report was published (below), show rather an abundance of sea ice off Ryrkaypiy: 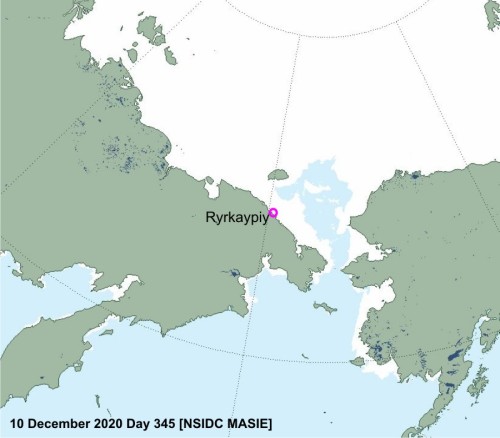 In fact, there has been ice offshore for weeks in that part of the Chukchi Sea, certainly enough to attract the seals on which polar bears usually feed in the fall. The chart below is from 1 December 2020: 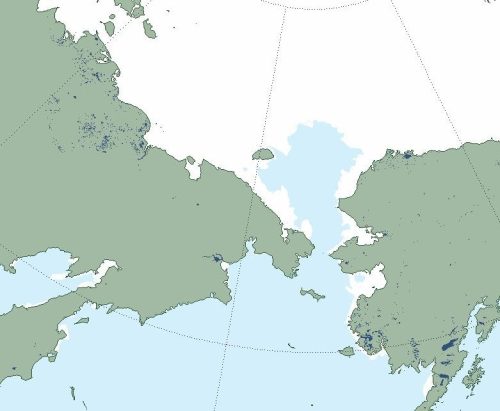 Derocher is describing what he thinks polar bears should do rather than assessing what the bears are actually doing. It is apparent that polar bears near Ryrkaypiy prefer to scavenge hundreds of walrus carcasses rather than hunt for live seals on the newly-formed ice and have been doing so since 2006 (see discussion below). Dead walrus, dead whales, and live seals are all natural food sources and provide the fat that polar bears need to thrive, so there is no reason to assume bears would not choose the more efficient route to a meal of fat when it presents itself.

Recent scientific studies have shown Chukchi Sea polar bears are in excellent condition and reproducing well despite recent declines in summer sea ice and there is no scientific evidence that this situation changed markedly this year (Adam et al. 2019; AC SWG 2018; Regehr et al. 2018; Rode et al. 2014, 2018). The latest survey estimated about 3,000 bears in the Chukchi Sea. On the contrary, there is every reason to suggest that more polar bears visiting Chukotka settlements in recent years is due to growing numbers of bears – as I suggested earlier this year to explain the rising problems with bears in Labrador. In other words, as was true in the 1980s, seeing more bears often means there are actually more bears.

Ryrkaypiy is located the base of a spit where walrus herds have congregated every few years in the fall, since at least 2007. Walrus numbers are way up compared to what they were in the 1990s and the size of herds that have come ashore in recent years have been rather astonishing (Crockford 2014; Fay and Kelly 1980; Fay et al. 1989; Fischbach et al. 2016; Lowry 1985; MacCracken et al. 2017). The town is just a little over a mile from the cliffs where the infamous Netflix and BBC walrus videos were shot in 2017. A mile is nothing for a polar bear: bears that ‘normally’ hang out on the spit are close enough to the village to cause trouble if they are so inclined.

In 2013, more than 40 polar bears were reported to be threatening Ryrkaypiy residents because they were drawn to two whale carcasses washed ashore nearby:

“Forty-three predators have gathered together near the village of Ryrkaypy, according to WWF Russia. Polar bears were spotted near the remains of two dead whales, washed onto the beaches several kilometers away from the Chukotka settlement.

“The last time a large number of polar bears gathered in one place was discovered on the Arctic coast of Chukotka in the fall of 2006,” head of the Polar Bear Patrol WWF project Viktor Nikiforov said.”

“…Ryrkaypiy, a tiny village located on the northern coast of Chukotka bordering the Chukchi Sea. According to a report by the Siberian Times, 5,000 walruses recently hauled out on a shoreline near the village. The walruses were followed by about 20 polar bears, no doubt drawn by the stench of thousands of blubbery, flippered meals.

The arrival of the bears caused the walruses to panic, and many attempted to flee. Per the Siberian Times, “several hundred” fell to their deaths off the cliffs of the nearby Kozhevnikova Cape. The bears, naturally, went to town on the carcasses.”

In 2007, polar bears descended on the village after a massive herd of 40,000 walrus spent time on the spit that fall, leaving more than 500 carcasses on local beaches from animals that had died naturally from falls or trampling.

Bottom line: This year’s report differed from the influx of bears that terrorized the village in 2007 and 2019 because the village seems to have finally taken sufficient measures to keep the bears out of town. Lack of sea ice caused by human-caused global warming is not causing increasing numbers of polar bears to congregate around Ryrkaypiy in the late fall. A combination of increasing numbers of bears plus an abundance of walrus that have died of natural causes earlier in the year are almost certainly the proximate cause. Carcasses of walrus and dead whales are an attractive source of food for polar bears who must replenish fat they have lost over the summer before the cold and darkness of winter sets in. These sources of fat are just as useful to bears for that purpose as live seals and are easier to access. Polar bears are often smarter than polar bear biologists assume.