Is there insufficient ice for polar bears to den offshore?

Posted on August 26, 2012 | Comments Off on Is there insufficient ice for polar bears to den offshore?

In an earlier post (July 26), I had some critical things to say about an article in the Edmonton Journal (July 17, 2012) by veteran Arctic science writer and photographer Ed Struzik called “Bleak future for polar bears, U of A scientists say“, which was picked up by news outlets across Canada.

The Struzik article publicized a summary academic paper written by polar bear biologists Ian Stirling and Andrew Derocher (a former Ph.D. student of Stirling) that appeared “in press” behind the paywall at the journal Global Change Biology on July 9.

The academic paper is a summary of Stirling and Derocher’s dire predictions on the future fate of polar bears as a result of melting of Arctic sea ice over the next few decades, one of the prophesied catastrophes of anthropogenic global warming. These views mirror to a large degree the chapter on “climate warming” in Ian Stirling’s book on polar bears released in 2011, which I reviewed recently here.

Let’s look at one of the statements made in the Struzik article:

In Alaska, many bears are denning on land because there is insufficient ice for them to give birth offshore.

But Struzik is a journalist. What do the original science articles say? Struzik’s statement (summarizing Stirling and Derocher’s review),  is based on work in the Southern Beaufort Sea (SB), which encompasses most of the north coast of Alaska and the adjacent north coast of the Northwest Territories, Canada – see Figure 1 below. 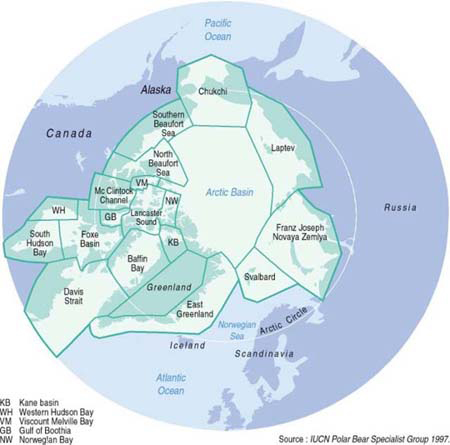 The new Stirling and Derocher paper says (pg. 6-7) that “the southern edge of the ice [in the Southern Beaufort Sea, see Fig. 1] has retreated further north in summer, the amount of stable old ice has declined, more of the remaining pack ice is unconsolidated, and the length of the open water season has increased which, collectively, appears to have made the offshore pack ice less attractive for maternity denning (Fischbach et al. 2007). The proportion of satellite-collared females in northern Alaska that denned on the pack ice declined from 62% in 1985-1994 [a 10 year period that ended 18 years ago] to 37% in 1998-2004 [a seven year period that ended 8 years ago].” [my bold]

“The changing nature of the sea ice in the northern Alaska region appeared to be the major factor influencing the changing distribution of polar bear maternal denning that we observed. The significant landward shift from the early to latter periods appeared to be driven by reduced suitability of the pack ice as a denning substrate.”[my bold]

In other words, there was a correlation between the two factors — an apparent shift to more denning on shore and declining sea ice condition over a short period of time.

However, the radio-collars used to track pregnant females in this study were attached to the bears in the fall, within helicopter range of coastal research bases (pg. 1398), suggesting the near-certainty that both samples were biased towards bears that chose to den on land – because of the location where the bears were captured.

In other words, more bears in both periods may have been captured on or near land in the fall than was representative for the entire population (many bears would have been offshore on the sea ice). This method of capture would have increased the number of bears in each of the samples that, a few months later, chose to den on land.

The authors say they accounted for this potential bias in the model that was used to analyzed patterns in denning location, but I take this statement to mean there was no bias between years.

The Fischbach et al. study actually determined the den locations of bears that remained near the coast in the fall each year – it could not estimate the proportion of all bears in the Southern Beaufort Sea that make their dens on land vs. sea ice because it did not sample bears that were offshore during the fall.

The point is, there were almost certainly many female polar bears that were denning in the pack ice but never came to land in the fall and therefore, could not be counted by this survey.

That’s 56 bears, per year, on land in the fall – out of 1,526 or so bears. That suggests that most pregnant females in the Southern Beaufort made their dens in the pack ice and never came to land in fall at all.

“Contrary to previous hypotheses (Stirling and Andriashek 1992), substantial polar bear denning occurs in the Beaufort Sea region of northern Alaska and adjacent Canada. Bears that den on pack ice are subject to risks not encountered by bears that den on land. Unstable, moving ice caused early abandonment of dens and, apparently, loss of cubs. However, the persistence of pack-ice denning indicated that those risks are not overwhelming.” [my bold]

Stirling and Derocher (2012:6) assert that “Southern Beaufort Sea polar bear subpopulation is the only one in which a significant proportion of the pregnant females are known to have had maternity dens on the stable multiyear ice floes in drifting pack ice.”

However, according to the field work conducted by Steve Ferguson and colleagues (2000) in the Canadian Arctic, polar bears utilize so-called ‘thick’ first year ice (1.2-2.0m) for over-wintering activities, including denning. Over in the Barents Sea, north of Norway (see Fig. 1), bears are also known to den on first year ice (Mauritzen et al. 2001).

It appears that Stirling and Derocher have little evidence to support an assertion that significantly fewer polar bears in Alaska are now able to make their dens on the sea ice than they did in the past because of declines in multiyear sea ice in the Southern Beaufort Sea.

“What I am trying to figure out is… why is denning on shore considered so terrible? It works quite well in the Churchill area, why would Beaufort end up any different? For a time, the Churchill population was actually producing more cubs than any of the other ones… seems fine to me. As long as there is accessible ice/seal dens in April in the west Arctic (which there is…), I don’t see the problem. An ice-free September in the Arctic really means nothing in the life cycle of polar bears.”

The only thing that I can figure is that according to polar bear field biologists, any change from what was happening in the 1980s must be bad – because the situation in the 80s was not only ideal for polar bears but essential for sustaining the population at the level it was at that time (at least for the few subpopulations that had had a population census done by that time – I have a post on that issue coming up soon).

That kind of thinking presumes that any polar bear subpopulation would not fluctuate to any significant degree due to natural causes, which is pretty preposterous in my opinion. What population of any species of mammal does not fluctuate, especially in response to extremes in seasonal conditions?

From dying manatees due to cold water in Florida to deer die-offs due to heavy snow, seasonal extremes take their toll – sometimes a severe toll. Polar bears, because of their Arctic habitat, are almost certainly negatively affected to some degree by warmer-than-usual or cold-than-usual conditions – if they come at critical times.

We already have evidence that heavy spring ice conditions have been associated with dramatic declines in polar bear numbers in at least one subpopulation – why presume that modest declines in bear numbers, in response to larger-than-usual sea ice declines in some years, is not similarly natural just because you have not personally experienced it before?

We have barely 40 years of data for Hudson Bay, not nearly enough time to establish trends associated with climate – even less for other subpopulations. A minimum length of time for climate data is 30 years, which means we have only one data point with regards to polar bear response to climate change.

I think you’ll also find that Western Hudson Bay bears are still producing more cubs, on average, than other populations. The rate of triplets and twins may indeed have declined over the last 10 years or so but the rates were so much higher than other populations to begin with that even a ‘dramatic’ decline leaves them with relatively higher rates of twin and triplet production.

All that said, in the end you are spot-on with your comment that “An ice-free September in the Arctic really means nothing in the life cycle of polar bears.” I’ll have a post up later today or tomorrow on that precise issue.