Educational video about Arctic sea ice to bookmark: excellent for adults and children

Posted on December 20, 2021 | Comments Off on Educational video about Arctic sea ice to bookmark: excellent for adults and children

One of the recommended videos I included in my Arctic Sea Ice Ecosystem Teaching Guide is a film called “Edge of Ice”. Produced in 1986 (before climate change hype pervaded everything), this 55 minute documentary from the National Film Board of Canada (filmed in Lancaster Sound, Canada) is an excellent summary of Arctic sea ice and its ecology. Available for free streaming here.

Narrated in parts by an Inuk hunter, it not only shows virtually all of the species associated with ice edges in the central Canadian Arctic, including polar bears, but also explains the process of freezing and thawing; life under the ice and the importance of polynyas.

Worth bookmarking for future viewing if you can’t get to it right away. Beats watching the news these days. It’s also a reminder to tell your homeschooling friends and relatives over the holidays about my free Teaching Guide resource: it’s something many parents will find useful.

Comments Off on Educational video about Arctic sea ice to bookmark: excellent for adults and children

I have put together a Arctic Sea Ice Ecosystem Teaching Guide for homeschooling Arctic sea ice ecology at the middle school level (grade 5-8; ages 10-13) meant to complement my two books, Polar Bear Facts & Myths and Walrus Facts & Myths and supplement your local school board curriculum. You’ll find critical facts about the amazing creatures that inhabit the Arctic sea ice, links to trust-worthy online sites with additional information, suggested exercises, and links to fascinating videos like this one that aren’t filled with doom-mongering about the future. The printable pdf booklet is free to download here (single typo in original corrected). However, if you find it useful and can afford to do so, please consider a small donation (I suggest $6.00) at the ‘donate’ button to the right.

Posted on September 15, 2021 | Comments Off on Still waiting for two thirds of polar bears worldwide to disappear due to lack of summer sea ice

It’s hard to believe that a polar bear specialist would claim that their predictions have come true, given the facts of the matter: that polar bears arguably number over 30,000 worldwide and regions with the most dramatic sea ice declines have not documented reduced polar bear health or survival. But in mid-July this year, Andrew Derocher – one of the field’s most vocal promoters – did just that: proclaimed on twitter that “virtually all of our predictions are coming true.” Except, none of them did, especially the most widely-promoted one, which failed spectacularly.

END_OF_DOCUMENT_TOKEN_TO_BE_REPLACED

Posted on August 31, 2021 | Comments Off on Polar Bear Facts & Myths for young readers in Portugal and Brazil

Due to the efforts of Thiago Maia and his team of assistants (Igor Vaz Maquieira and Márcio Calixto), I can now offer a Portuguese translation of my popular Polar Bear Facts & Myths science book for young readers in Brazil and Portugal.

END_OF_DOCUMENT_TOKEN_TO_BE_REPLACED

Outlandish ‘tipping point’ rhetoric is about to be regurgitated once again during the promotion of the latest IPCC report, due today. Tipping points are those theoretical climate thresholds that, when breeched, cause widespread catastrophe; they are mathematical model outputs that depend on many assumptions that may not be plausible or even possible.

Tipping points are not facts: they are scary stories made to sound like science.

END_OF_DOCUMENT_TOKEN_TO_BE_REPLACED

Posted on March 22, 2021 | Comments Off on Choose verifiable facts over emotional narratives on polar bear conservation

“Polar bears continue to be described as ‘canaries in the coal mine’ for the effects of human-caused climate change, but the evidence shows they are far from being a highly-sensitive indicator species.” Susan Crockford, 24 February 2021 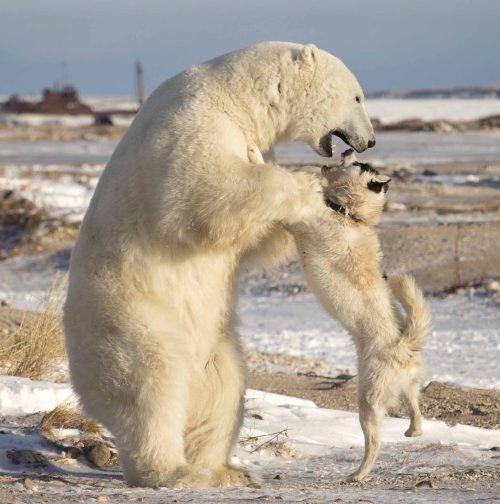 You’ll find the evidence I allude to above – backed up by references to the peer-reviewed literature – in my many publications (Crockford 2015; 2017; 2019, 2020, 2021). My open-access research paper from 2017 has been downloaded more than 6,000 times and despite this being an online forum for legitimate scientific critique, none has been offered. My comprehensive polar bear science book released just two years ago (see below) has a 4.7/5.0 star rating on Amazon, with 132 reviews so far.

For those who haven’t seen it, I’ve copied below the preface from The Polar Bear Catastrophe That Never Happened. This book is an antidote to the emotional blackmail coming at the public from all sides by journalists, polar bear specialists, and elite influencers like David Attenborough.
END_OF_DOCUMENT_TOKEN_TO_BE_REPLACED

Posted on March 19, 2021 | Comments Off on Polar bears are thriving: an ICSC Canada short video

From Tom Harris at ICSC Canada: Polar bears are nowhere near as sensitive to declining sea ice than originally thought. In fact, their population is now three times higher than in the 1960s. 17 March 2021 [1:28]

Comments Off on Polar bears are thriving: an ICSC Canada short video

Podcast with WildFed about polar bears and domestication as speciation

Posted on March 2, 2021 | Comments Off on Podcast with WildFed about polar bears and domestication as speciation

A couple weeks ago I had a fabulous chat with Daniel Vitalis from Wildfed about a wide range of topics, including my work on polar bears and domestication as a process of speciation. The podcast went live this morning – have a listen here (also copied below), I think you’ll enjoy it. One hour, 36 minutes.

Not a myth: State of the Polar Bear Report shows 2020 was another good year for polar bears

Posted on February 24, 2021 | Comments Off on Not a myth: State of the Polar Bear Report shows 2020 was another good year for polar bears

The ‘State of the Polar Bear Report 2020’ is now available. Forget hand-wringing about what might happen fifty years from now – celebrate the fabulous news that polar bears had yet another good year. 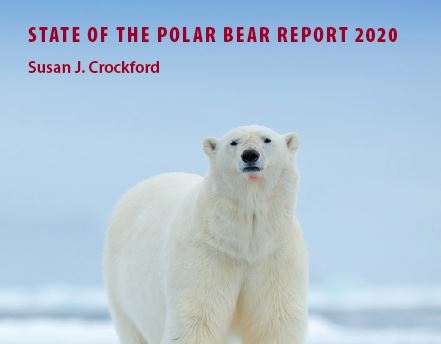 London, 27 February: A prominent Canadian zoologist says that Facebook’s information is gravely out of date and 2020 was another good year for polar bears.

In the State of the Polar Bear Report 2020, published by the Global Warming Policy Foundation (GWPF) on International Polar Bear Day, zoologist Dr. Susan Crockford explains that while the climate change narrative insists that polar bear populations are declining due to reduced sea ice, the scientific literature doesn’t support such a conclusion.

Crockford clarifies that the IUCN’s 2015 Red List assessment for polar bears, which Facebook uses as an authority for ‘fact checking’, is seriously out of date. New and compelling evidence shows bears that in regions with profound summer ice loss are doing well.

Included in that evidence are survey results for 8 of the 19 polar bear subpopulations, only two of which showed insignificant declines after very modest ice loss. The rest were either stable or increasing, and some despite major reductions in sea ice. As a result, the global population size is now almost 30,000 – up from about 26,000 in 2015.

Dr. Crockford points out that in 2020, even though summer sea ice declined to the second lowest levels since 1979, there were no reports of widespread starvation of bears, acts of cannibalism, or drowning deaths that might suggest bears were having trouble surviving the ice-free season.

As Crockford’s report reveals, plankton growth – the critical health measure of marine life in the Arctic – reached record highs in August 2020. More plankton (‘primary productivity’) due to less summer ice means more fodder for the entire food chain, including polar bears. This explains why bears are thriving in areas such as the Barents Sea, which have seen reduced levels of sea ice.

Dr. Crockford notes that, ironically, polar bears in Western Hudson Bay experienced excellent ice conditions for the fourth year in a row in 2020. Bears were fat and healthy when they arrived on shore for the summer. Some spent as little as three months on shore – about one month less time than most bears did in the 1980s and two months less than bears did in the 1990s and 2000s.

Dr. Crockford explains that polar bears are more flexible in their habitat requirements than experts assumed and less summer ice has so far been beneficial rather than detrimental.

“Polar bears continue to be described as ‘canaries in the coal mine’ for the effects of human-caused climate change, but the evidence shows they are far from being a highly-sensitive indicator species. It’s not a myth: 2020 appears to have been another good year for polar bears.”

Comments Off on Not a myth: State of the Polar Bear Report shows 2020 was another good year for polar bears

Fact: polar bears are thriving despite sea ice loss according to the scientific literature

Posted on February 19, 2021 | Comments Off on Fact: polar bears are thriving despite sea ice loss according to the scientific literature

Is Facebook now an expert on polar bear conservation status? Apparently they have decreed themselves the last word for online content. There is a plan afoot to label anything that says polar bears are not being harmed by recent sea ice declines as ‘disinformation’ – but on whose authority? Thanks to Josh for the cartoon below.

A new section of the Climate Science Information Center, launching alongside the labelling trial, debunks common myths such as the false claim that polar bear populations are not suffering due to global heating, or the widespread belief that excess carbon emissions help plant life. Facebook is working with climate communication experts from around the world, including at the University of Cambridge, to produce the content.

Ah, they’re consulting ‘climate communication experts‘! Those experts surely must be up on all the latest papers and not trusting the word of obviously biased conservations organizations like the WWF or PBI whose real reason for existence is the generation of as much money in donations as possible?

The peer reviewed literature supports the claim that polar bears are currently thriving despite recent ice declines – especially in the Chukchi and Barents Seas – regardless of what computer model predictions say about what might happen in the future. This is a fact, not a ‘myth’. See my paper from 2017 and my 2019 book for most of the citations (Crockford 2017, 2019) and others in the reference list below. Check them out yourself before you believe Facebook. Ask me for any paper you’d like to see via the ‘contact me’ form and I’ll send it along. Also, look for my State of the Polar Bear Report 2020 next week.

END_OF_DOCUMENT_TOKEN_TO_BE_REPLACED

Comments Off on Fact: polar bears are thriving despite sea ice loss according to the scientific literature