Posted on November 30, 2019 | Comments Off on BBC’s One Planet falsely claims that polar bears hunting whales from shore is an unprecedented effect of climate change

Polar bears leaping on the backs of belugas off Seal River, in western Hudson Bay, is being falsely promoted by the BBC’s new “Seven Worlds: One Planet” TV special as an unprecedented effect of climate change.

‘This extraordinary behaviour has only been recorded here, in this remote corner of North America, and only in the last few years.’

Poppycock. More climate change hyperbole from Attenborough’s seemingly never-ending litany of nonsense that’s easily refuted. There is scientific literature documenting such behaviour in Canada’s far north in the 1980s, which I included in the blog post I wrote about this phenomenon a few months ago (after National Geographic published a similar scare-story), which I have reposted below.

And from the sounds of it, there was no mention in the BBC special that freeze-up along western Hudson Bay was early again this year: for the third year in a row. So if the footage was filmed any time since 2017, the claim of accelerating sea ice loss in this region and bears on land for longer than ever is pure fantasy. PS. Fat bears are not ‘starving’.

END_OF_DOCUMENT_TOKEN_TO_BE_REPLACED

Posted on November 20, 2019 | Comments Off on Fabulous lectures in Holland done: Munich conference forced to relocate

My satisfaction over four successful lectures in and around Delft in the Netherlands over the last few days was somewhat soured yesterday by the news that the EIKE conference in Munich scheduled for 22-23 November (my next and last stop on my European tour) was on the verge of collapse because of threats from anti-science protesters.

END_OF_DOCUMENT_TOKEN_TO_BE_REPLACED

Comments Off on Fabulous lectures in Holland done: Munich conference forced to relocate

Posted on November 11, 2019 | Comments Off on Western Hudson Bay freeze-up earlier than average for 1980s for the third year in a row

This is the third year in a row that freeze-up of Western Hudson Bay (WH) ice has come earlier than the average of 16 November documented in the 1980s. Reports by folks on the ground near Churchill confirm polar bears are starting to move onto the sea ice that’s developing along the shore after almost 5 months on land. After five good sea ice seasons in a row for WH polar bears, this repeat of an early freeze-up means a sixth good ice season is now possible for 2019-2020.

Sadly for the tourists, however, it means the polar bear viewing season in Churchill will be ending early this year, just like it did last year and the year before. 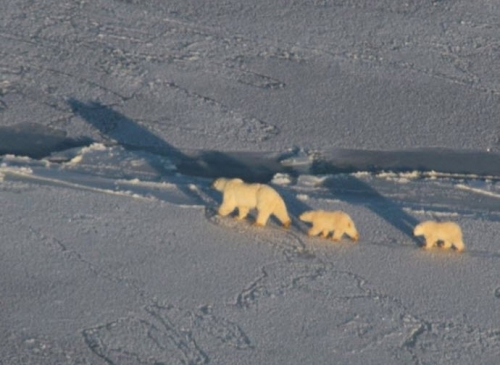 Polar bear family on the ice off Churchill Manitoba (taken from a helicopter), courtesy Explore.org

When mothers with cubs are out on the ice (see photo above), it’s pretty certain the mass movement from land to sea ice is well underway because these family units are usually the last to leave.

UPDATE 19 November 2019: Polar Bear Alert report for 11-17 Nov (week 20) confirms that freeze-up is underway, bears are heading out on the ice and problem bears held in the ‘jail’ were released 13 November. See below.
END_OF_DOCUMENT_TOKEN_TO_BE_REPLACED

UPDATE 6 Nov 2019: I have substantially modified this post based on receipt of the actual court documents describing the case, which is much more complicated than it appeared from the news reports quoted. Many thanks to Donna LaFramboise for passing it along! Clarifications in red, incorrect statements crossed out.

The Inuit fight in Canada with the federal government over polar bear conservation status continues. The government, led by Environment and Climate Change Minister Catherine McKenna, reduced polar bear hunting quotas in Southern Hudson Bay only from 28 to 23, based on the results of the 2011-2012 survey. In response, Inuit groups have submitted affidavits in federal court stating that polar bears are thriving. The court dismissed the Inuit challenge even though polar bears in Canada are not considered threatened or vulnerable to extinction, and encouraged the two parties to resolve the dispute outside the court. The dispute was about Inuit treaty rights vs. conservation concerns regarding sustainable harvest levels, not conservation impacts from climate change, and the decision did not resolve the issues of sex-selective harvesting and defense of life kills counting against harvest quotas.

END_OF_DOCUMENT_TOKEN_TO_BE_REPLACED

Few of the reporters who covered this story bothered to investigate further despite the evidence provided by myself and others that polar bears and drones were the likely triggers for these deaths: they simply took Attenborough and the film crew at their word.

Netflix director Sophie Lanfear and cameraman Jamie McPherson insisted there were no polar bears in the vicinity at the time they shot their film footage but this was clearly not the case. They knew that bears were involved because they filmed them menacing the walrus!

It is now evident that McPherson filmed the 20 or so polar bears stalking walrus at the top of the Ryrkaypiy cliff and driving them over the edge for the BBC episode only a few days prior to filming a few walrus falling with no bears present on the cliff top for the Netflix film in September 2017. The bears were close enough when the Netflix sequence was filmed to converge immediately on the rookery to feed on carcasses once the walrus herd left the beach.

Fat, healthy polar bears (not desperately hungry ones) were indeed involved in these walrus deaths and so were drones. Lack of sea ice was not a significant factor.