Another polar bear advocate writes a book: Derocher and Lynch 2012

Posted on September 7, 2012 | Comments Off on Another polar bear advocate writes a book: Derocher and Lynch 2012 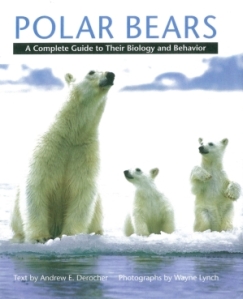 Here is the promotional description of this book:

“Derocher and Lynch have spent decades following polar bears, and this book offers the most comprehensive and readable review of their biology, ecology, behavior, and conservation.” From the JHUPress catalogue

This statement suggested to me that I would find Andrew Derocher’s new book upbeat and primarily concerned with explaining the biology, behavior and life history of polar bears, as the title suggests. I’d buy a book like that, I thought.

I was also eager to see how Derocher’s effort compared with Ian Stirling’s book that came out last year (2011), which I reviewed in July. The title of Stirling’s book – Polar Bears: The Natural History of a Threatened Species – did at least hint at the advocacy found within.

Would Derocher’s book be substantially different, despite his strident advocacy on display just last month in the press “Bleak future for polar bears, U of A scientists say” and in his most recent co-authored scientific paper (Stirling and Derocher 2012, now in print), that I discussed briefly in my first post?

The quote on the back cover of the book, taken from the introduction, says nothing about global warming – an encouraging sign, I thought.

On the more detailed inside flap (used here), global warming is mentioned a couple of times but both are rather cavalier in tone “…tracing the animals back to their evolutionary roots and looking ahead towards a future on a warming planet.” And in the next paragraph: “He addresses the threat of global warming to the Arctic – home to polar bears for tens of thousands of years – and describes in impressive detail their feeding habits, distribution, den ecology, and reproduction.”

Not quite so encouraging –  but perhaps I will be pleasantly surprised, I thought.

It did not take long to be disappointed. The first photo caption (in the acknowledgments) says this [emphasis mine in all cases below]:

“Fresh from a swim, this young adult female surveys her surroundings as they rapidly melt with the advancing summer. Polar bears are a threatened species because global warming in the Arctic has caused major changes in the sea ice that they depend on to hunt, travel and mate.”

“Highly capable swimmers, polar bears paddle with their front paws. Long distance swims are common for adult bears without young. All bears are vulnerable to storms. As the sea ice continues to melt, more open water means larger waves can form during storms and more drowned polar bears may result.”

“Polar bears are sea ice specialists, and global warming is causing the ice to melt earlier in the summer and form later in the autumn. Melting sea ice is a form of habitat loss and no species can survive without its habitat.”

“A steady decline in sea ice throughout the Arctic has been documented and that trend is predicted to continue. Current projections suggest that two-thirds of the world’s polar bears will disappear by mid-century unless climate warming can be brought under control.”

“Killer whales are already exploiting reduced Arctic sea ice. Normally excluded from the ice-filled waters of the north, killer whales may become the top predator in the marine ecosystem. If polar bears disappear because sea ice disappears, the Arctic as we know it will no longer exist.”

And another (photo of bear swimming through loose ice, pg. 224):

“The polar bear’s Arctic home is melting. And this highly specialized species cannot survive without the sea ice on which it hunts, travels, eats, sleeps, plays, and rears its young.“

This is not the last of the depressing photo captions but I think you get the point.  A reader looking only at the pictures will not escape the essential message of this book, which is not “polar bears are fascinating” but “polar bears are doomed.”

This feature makes Derocher’s book distinct from Stirling’s – criticisms of his book notwithstanding, I did not find a single alarming statement in the photo captions of Stirling’s book.

What about the text of Derocher’s volume?

Also in contrast to Stirling’s offering, there are virtually no references or author’s names cited throughout the book to back up Derocher’s statements. There is a list of references in the back but no way to associate any particular statement with the document it came from, like this one (pg. 219): “There are tipping points for any population, and some studies predict that polar bear mortality could spike in a single year and drive a population to desperately low levels.” [my bold].

All of the doom and gloom predictions about the future of sea ice are made as statements of fact. Since Derocher is not a climate scientist or an Arctic sea ice expert, even non-scientist readers might expect to see at least a mention of another scientist’s name within the text, or a publication, to back up his claims. He does with some of his historical facts in Chapter 4, why not elsewhere? Not even the IPCC gets a mention in the text in regards to global warming – at least, not that I could find.

A student or curious reader looking to follow up on a particular topic is going to find this book a frustrating springboard. Derocher’s writing style discourages further exploration, which makes it unlikely this book will inspire a budding biologist.

But I guess that’s the point: this book is not meant to inspire future scientists but future advocates.  Confirmation of this conclusion is found on the last two pages of the book.

“What You Can Do To Help The Ice Bear” (pg. 226), a shaded box covering most of the page, with a full page photo opposite of a very young cub’s face, with eyes in the center. The caption of this photo reads: “The future for polar bears is uncertain. People have the technological expertise to curtail the global warming that is destroying the polar bear’s habitat. Whether we have the will to do so is the question.” [my bold]

The first line of this shaded box says, “The carbon humans put into the atmosphere is the major threat to polar bears.” A few sentences later, it reads: “We are already losing polar bears.” [my bold]

In the last paragraph of the book (below the shaded box on how to save the “ice” bears), Derocher shares his motivation: “Polar bears have been good to me. I have learned a lot about their lives and I feel I owe them something for the privilege of having studied them. If learning more about polar bears inspires people to act in their favor, then, in some small way, the debt is being repaid.” [my bold]

So, a different style aimed at a less sophisticated segment of the reading public but ultimately, Derocher’s book is not so different from Stirling’s after all. The cursory reader who views only the pictures of a book are part of Derocher’s target audience, while Stirling aimed rather higher. Both end with emotional appeals for readers to be advocates, not biologists.