My interview with CNS News: “Alaskan Polar Bears Threatened…By Too Much Spring Ice”

Posted on April 25, 2014 | Comments Off on My interview with CNS News: “Alaskan Polar Bears Threatened…By Too Much Spring Ice”

Not bad, as these things go, but the reporter made one error that needs correcting – so I’m doing it here to set the record straight, just in case it does not get taken care of in the original story.

CNS News reporter Barbara Hollingsworth had seen my post last week, “Current ice conditions don’t bode well for Beaufort Sea polar bears” and wanted to talk to me about it. It was a little rushed, but I agreed.

This is how it turned out, with the error corrected and an updated ice thickness map. 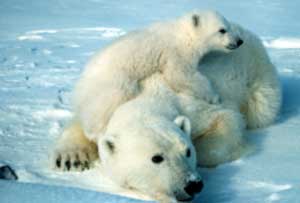 “(CNSNews.com) – Five meters of ice– about 16 feet thick – is threatening the survival of polar bears in the Southern Beaufort Sea region along Alaska’s Arctic coast, according to Dr. Susan J. Crockford, an evolutionary biologist in British Columbia who has studied polar bears for most of her 35-year career.

That’s because the thick ice ridges could prevent ringed seals, the bears’ major prey, from creating breathing holes they need to survive in the frigid waters, Crockford told CNSNews.com.

“Prompted by reports of the heaviest sea ice conditions on the East Coast ‘in decades’ and news that ice on the Great Lakes is, for mid-April, the worst it’s been since records began, I took a close look at the ice thickness charts for the Arctic,” Crockford noted in her Polar Bear Science blog on April 18th.

“Sea ice charts aren’t a guarantee that this heavy spring ice phenomenon is developing in the Beaufort, but they could be a warning,” she wrote, noting that they “don’t bode well” for the Beaufort bears.”

But this part of the story she got wrong [corrected in original afternoon of April 28, 2014]:

“The international IUCN Polar Bear Specialist Group (PBSG) conducted a polar bear population survey for the area in 2006. It reported a decline in the adult polar bear population and reduced cub survival rates, which was used to list the bears as a “threatened species” in the U.S. in 2008.”

Not so, and I never said or wrote that.

However, what I did write might not have been clear enough.

1) It was biologists working for the US Geological Survey that did the 2006 study on Southern Beaufort polar bears.

2) The PBSG is the organization that issues periodic status updates and population estimates for all 19 subpopulations worldwide. Like the Intergovernmental Panel on Climate Change (IPCC), the PBSG does not do research.

3) The US ‘threatened’ status was a decision made by the US Fish & Wildlife Service based on a number of studies and analyses conducted by USGS scientists, not just the Southern Beaufort study.

Postscript
There is another error that Hollingsworth made based on a misunderstanding. In describing the work of biologists in the Southern Beaufort in 2004-2006, she wrote:

“But the biologists were not there to see the thick [spring] ice. All they saw was thin bears,” she pointed out. “They blamed the poor condition of the bears on summer ice, instead of acknowledging that it was likely the condition of the ice in the spring that was the cause of the problem.” [my bold]

To bring this story up to date, I’ve copied (below) a screencap of the US Navy (nrlssc) ice thickness animation chart for yesterday, April 25 [from WUWT Sea Ice Page] with the Beaufort coastline marked in white.

Some of the ice converging on the Alaskan coast is 3.5-4.5 m. thick, which will become thicker in places where the ice compressed against the shore forms heavy ice ridges. 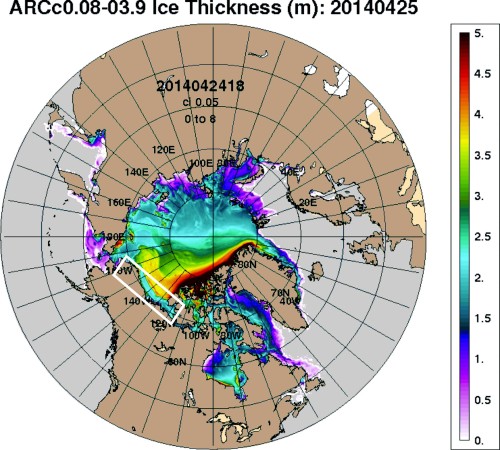 Related posts:
Polar bears move around as sea ice habitat changes – this is what resilience looks like April 14, 2014

Why is it that every decade, Eastern Beaufort sea ice gets really thick? June 28 2013

Did polar bear numbers in E Beaufort fluctuate each decade due to thick ice years? July 2 2013