Posted on June 27, 2014 | Comments Off on Swimming bear video used for propaganda was not shot with bear-mounted cameras

I just went back to Andy Revkin’s blog post on the swimming polar bear video story that I wrote about on Wednesday to see what kind of feedback it was getting. I found that it pays to check up. 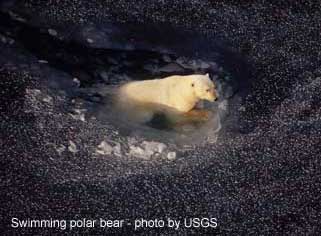 A reader from Oregon questioned the filming techniques used for this video.

And it turned out, the reader from Oregon was correct — the film used in this video was shot with “an assortment of traditional methods,” not with the strapped on cameras that the USGS were using on the bears.

Revkin assumed from the background provided to him that this was leading-edge technology, bear-generated video. And even though he’d interviewed the filmmaker, the truth hadn’t come out.