Sharks off Cape Cod vs. my polar bear attack thriller – an unnerving parallel

Posted on July 6, 2016 | Comments Off on Sharks off Cape Cod vs. my polar bear attack thriller – an unnerving parallel

I watched an episode of Discovery Channel’s Shark Week last Friday and I have to admit, it gave me a terrifying déjà vu moment.

Specifically, it was the episode called “Shark Bait” (1 July 2016) – about the potentially explosive problem of booming populations of grey seals around Cape Cod (NE US, Massachusetts), the increasing numbers of great white sharks that are moving in to hunt them (see trailers here and here), and the thousands of relatively blasé humans that play and surf in the shallows nearby. UPDATE: video now available on Youtube, see below:

What could possibly go wrong?

The parallels of EATEN with this developing shark situation are more than a little unnerving and makes it clear that my piece of speculative fiction may apply to more than polar bears. [ebooks still on sale for 99 cents – see direct links at bottom of this post]

See the details on the great white shark/seal conundrum below and decide for yourself.

A CTV News report a few years ago (Patrick Whittle, 21 July 2014, “Grey seals: As numbers rise, so do conflicts”) summed up the phenomenon and ensuing problems rather succinctly:

“The once-thriving New England grey seal population was decimated by the mid-20th century because of hunting, with Massachusetts keeping a seal bounty on the books until the 1960s. But scientists say conservation efforts, an abundance of food and migration from Canada combined to revive the population.

Environmentalists cheer the resurgence, saying the grey seal boost is good for biodiversity and a boon for popular seal watch tours in coastal New England. But many fishermen say the seals interfere with fishing charters and steal catch. Beachgoers bemoan the 600-plus-pound seals taking over large stretches of shore, befouling beaches and attracting sharks, which feed on seals.” [my bold]

An article earlier this year in the Cape Cod Times (8 March 2016) included the interesting map below, from data collected by shark researchers working in the area: 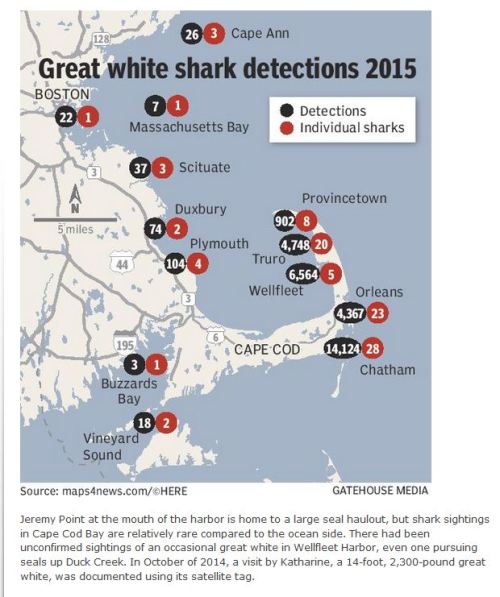 As long as grey seals remain plentiful, there may not be too much to worry about, no matter how many sharks are after them. [Really big great whites can reach 20 feet in length but few are larger than 15-16 feet. That’s still a big shark] 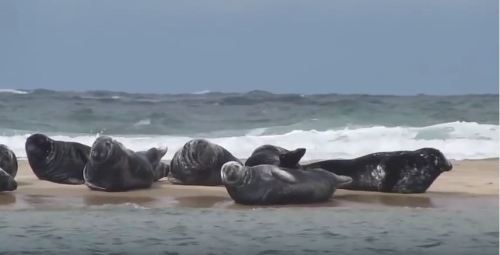 For the most part, great whites are just doing what they need to do – eating seals. A family out boating off Monomoy Island (at the south end of Cape Cod) captured one such incident (the screencap at top of this story came from the video below, taken August 2012):

But the really scary thought is this: what happens if some kind of disease or other natural disaster wipes out those seals? What happens if the sharks come to feed and find nothing but people frolicking in the surf?

I suggest that scenario would likely play out like a watered down version of my polar bear attack thriller (where the bears come looking for human prey onshore because their preferred seal prey have disappeared due to disease). Pardon the pun, but I think it’s true.

A similar shark scenario would be less scary than EATEN because at least people would be safe in their own homes – all they would have to do is stop swimming and surfing. Once they realize the danger, that is.

I already knew my novel belonged in the same genre as Peter Benchley’s 1974 novel, JAWS – but hadn’t realized that the 40 or so years that have passed since his thriller was published had made the parallels so much stronger. Lots of powerful predators hunting for food, lots of gregarious seals vulnerable to disease epidemics, and a relatively helpless human population.