Posted on October 11, 2016 | Comments Off on In case you missed it…writer James Delingpole puts my novel in context 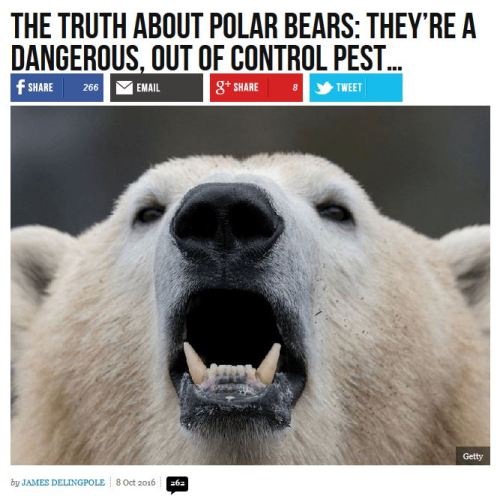 The Truth About Polar Bears: They’re a Dangerous, Out of Control Pest…

“Crockford is the author of a Jaws-style thriller on ravenous polar bears killing humans called Eaten. At least one polar scientist who has read it considers its “science-based scenario” to be frighteningly plausible.

In field-level polar bear management circles, people don’t talk about the kind of scenario that forms the premise of this novel as an “if”. Instead, they describe it as a “when” and they are not looking forward to it.

Eek is right! The book has been nightmare-inducing for many readers. Put EATEN on your Christmas shopping list (all purchase options here). It makes a great gift and supports the work I do here. Colleagues have said their young adult children really enjoyed it.

[I’m reminded of Christmas since we had turkey for Canadian Thanksgiving this weekend – a fabulous gathering of all the local family at my place, including the two (!!) grandbabies, both of whom are now walking. I’ll be sending Nico to Churchill before you know it]

[And FYI, I’ve updated the Svalbard “problem no one is talking about” post with statistics by year (1974-2015) for polar bears killed to protect life and property]