Posted on March 20, 2017 | Comments Off on Prehistoric polar bear find has elongated body type Inuit know as a ‘weasel bear’

A story that broke in Alaska newspapers a month ago made the UK press this weekend about the archaeological discovery of 1,300 year old polar bear skull that may be associated with an unusual body type known to Inuit hunters. See the Mail Online cropped headline below, full story here – and some quotes and critical background below.

A huge, unusually shaped polar bear skull, left, emerged in 2014 from an eroding archaeological site southwest of Utqiagvik. It is quite different from most modern polar bear skulls, right. (UIC Science)

Aboriginal hunters from Arctic Canada have a couple of names for what they say is an extremely rare polar bear that is huge, narrow-bodied, fast-moving and lithe: “tiriarnaq” or “tigiaqpak,” meaning “weasel bear.”

Now the thawing and rapidly eroding Chukchi Sea coastal permafrost has produced evidence that one of these legendary weasel bears — or some other strange kind of bear — roamed Arctic Alaska centuries ago.

A huge, fully intact and unusually shaped polar bear skull emerged in 2014 from an eroding archaeological site about 13 miles southwest of Utqiaġvik (Barrow).

It is one of the biggest polar bear skulls ever found — and quite different from most modern polar bear skulls. It is slender, elongated in the back and has unusual structural features around the nasal area and other areas.

“It looks different from your average polar bear,” said Anne Jensen, an Utqiaġvik-based archaeologist who has been leading excavation and research programs in the region.

Through radiocarbon dating and subsequent analysis, Jensen and her colleagues estimate that the big bear skull — which appears to be the fourth largest ever found — is from a period between the years 670 and 800. It is possibly the oldest complete polar bear skull found in Alaska, inspiring a name for the departed creature that owned it: The Old One.

Exactly what accounts for its differences is yet to be determined; genetic testing is needed for that, Jensen said. It could have been a member of a subspecies or a member of a different “race” in genetic terms — similar to the varying breeds that are found among dogs — or possibly something else entirely, said Jensen, who works for the science department of the Native village corporation, Ukpeaġvik Iñupiat Corp., or UIC.

These details, and those from the document referred to in the story (see citation below, pgs. 129-131, from which the map below comes), suggests these ‘weasel bears’ might simply reflect individual variation in body size and type that is more noticeable in lean animals. In other words, a large bear with a longer-than-average body length and long narrow skull that might not put on visible body fat reserves until late in the feeding season. 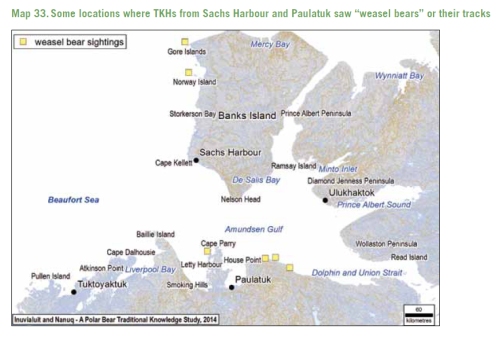 This ‘weasel bear’ does not sound at all like a distinct subspecies or race of polar bear but rather normal individual variation within a species that has not yet been described by biologists.

Just because this body type has an Inuvialuit name that makes effective communication possible for local hunters does not make this bear type a distinct biological entity (like a subspecies, which is almost always geographically isolated). And while more information might clarify the situation, I suspect the kind of genetic testing possible from this ancient bone won’t give a satisfying answer (from a living specimen – perhaps).

Still, it’s an interesting phenomenon worth knowing and thinking about further.