Posted on March 7, 2018 | Comments Off on Polar bear ashore in Puvirnituq NE Hudson Bay over the weekend

More ‘bears on shore’ news today, this time involving a young polar bear that came ashore in the village of Puvirnituq, northern Quebec and was shot for safety reasons by a local hunter. 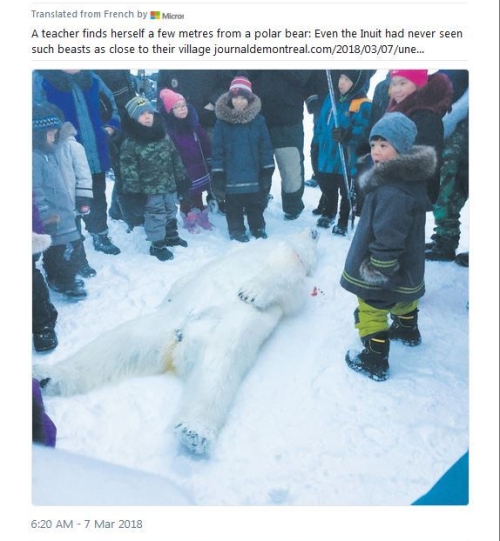 This incident is reminiscent of one last year a bit further north (Ivujivik) in early March, which I reported here.  Both involved young bears from the large and stable Foxe Basin subpopulation. As I’ve pointed out before, most bears in late winter are at their lowest weight and this can make them very dangerous if they come ashore looking for food.

But unlike the Ivujivik incident, was the first time a bear had ever come into the village of Puvirnituq, making it more like the visit in late February 2017 of a young female bear in Inukjuak further  south along the coast, the first such visit of a polar bear to that community in more than 30 years.

The exception to lean condition in late winter being the norm are bears in the Davis Strait subpopulation that have harp seals to feed on by February and are often in good condition by early March, as was the bear reported ashore yesterday in Newfoundland.

Puvirnituq, northern Quebec. Polar bears in this region are part of the Foxe Basin subpopulation.

The news today came via an English language blog post that got an essential detail wrong1, so I turned to Google Translate to offer this version of the original, in French (Journal de Montreal, 7 March 2018):

The heart of a teacher from Rivière-du-Loup working in Nunavik made only one lap when she fell face to face with a polar bear that was within 20 meters of her.

This would be the first time a polar bear has come so close to the village of Puvirnituq, in Northern Quebec, according to what the Inuit told Julie Côté, who has been teaching there since December.

The teacher was walking on a road near the village on Sunday afternoon [4 March 2018]. She was close enough to see the houses and hear the dogs barking.

“It was a bit that I was walking towards him. I froze on the spot. Your heart stops and you do not move, “said Ms. Côté.

Fortunately, she did not scream and did not run immediately, reactions discouraged. She waited a minute and watched him go down the hill and walk away. As soon as she lost sight of him, she ran towards the village to alert the police.

The police did not immediately believe it, because a polar bear had never come so close to the residences. They returned to the site and saw the animal’s footprints next to those of the boots that the teacher had made in the snow, during her escape.

Almost at the same time, the bear was shot by an Inuit hunter whose wife had seen him between two houses.

Older Inuit hunters estimated that the bear was about two years old. The day before, a big snowstorm had hit the area and some think it could have been lost.

The fur of the beast was kept as a trophy and the meat shared between the people of the village. Julie Côté preferred not to eat it.

Footnote 1: It is clear from the original story that the teacher who saw the bear, Julie Côté, is originally from Rivière-du-Loup, Quebec (on the south shore of the St. Lawrence River, east of Quebec City) but has been in Puvirnituq, northern Quebec since December. The English language blog post says the incident happened in Rivière-du-Loup, which raised red flags for me as probably being unlikely. It shows, however, how easy it is for an error to enter the record when people aren’t careful with details.