A recent study by Norwegian biologist Karen Lone and colleagues, who tagged 57 polar bear females with sensors around Svalbard, discovered that polar bears can dive to a maximum depth of 13.9m and can swim long distances across open water without rest. Contrary to previous claims, polar bears are excellent divers and their breath-holding ability did not seem to limit how deep they could dive. 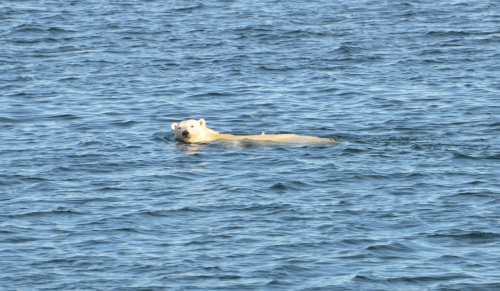 From the abstract of the new paper by Lone and colleagues (Lone et al. 2018):

“Some bears undertook notable long-distance-swims. Dive depths up to 13.9 m were recorded, with dives ≥5 m being common. The considerable swimming and diving capacities of polar bears might provide them with tools to exploit aquatic environments previously not utilized.”

Compare the above statement to one made by Stirling and van Meurs (2015), after describing a 3 minute dive video-taped during an aquatic stalk of a bearded seal, also in the Svalbard area:

“…increased diving ability cannot evolve rapidly enough to compensate for the increasing difficulty of hunting seals because of the rapidly declining availability of sea ice during the open-water period resulting from climate warming.” [my bold]

These two papers really show the difference between using anecdotal accounts as if they were evidence of species-wide physical abilities and doing a scientific study on the physical ability of interest.

“The first of these example polar bears, N26241, used the offshore Marginal Ice Zone (MIZ) and undertook several long transit swims between the MIZ and land (Fig. 6A,B). This bear used areas north of Spitsbergen and Nordaustlandet in 2015 and 2016. She was 8 years old when she was collared in 2015, and did not have cubs in either year. This bear exemplifies the capacity of some polar bears in the Barents Sea subpopulation to make repeated long-distance swims. In 2015, she transited twice from the MIZ to North Spitsbergen (18 May: 70 km, swimming 26 h of 28 h, 24 h continuously; 6 June: 92 km, swimming 30 h of 38 h, 18 h continuously). 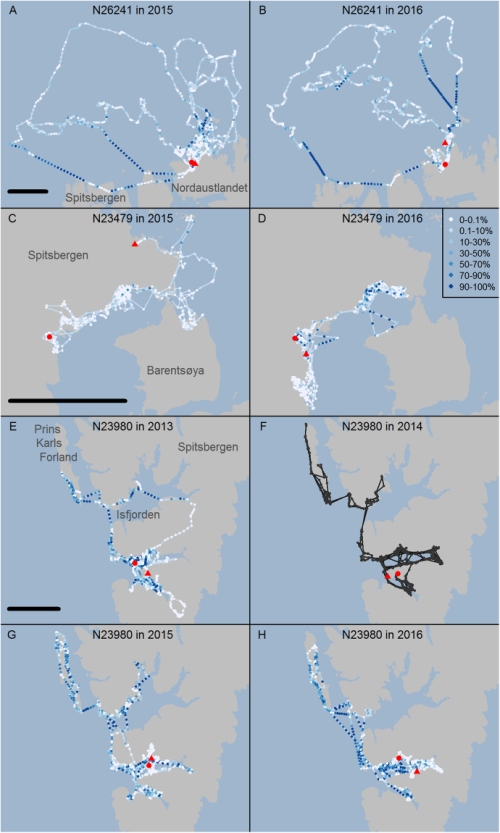 The authors also recorded a bear who regularly traveled up the ice-free west cost of Spitsbergen (the largest island in the archipelago where the capital is located), whether she had cubs of the year or not, to feed on newborn harbour seals that had just been weaned. They stated [my bold]:

“The third example polar bear, N23980, illustrates a polar bear that used a special strategy (Fig. 6E,F,G,H). This bear swam regularly between islands and across fjords, even when accompanied by two COYs. She exhibited a set temporal pattern to her space use along the west coast of Spitsbergen, where she moved north from Van Mijenfjorden to Prins Karls Forland and affiliated small islands (PKF), the latter area being the core breeding area for Svalbard’s harbour seal population. Her time of arrival at PKF specifically coincided with the end of the harbour seal nursing period, when newly weaned pups were available (pers. obs. KM Kovacs, C Lydersen) in June-July.”

Regarding diving abilities of polar bears with respect to depth, Lone et al. stated [my bold]:

A 14 year old female (N7955) that did not have cubs when the collar was deployed, nor when she was recaptured three years later, dove deeper and more often than the other [five] polar bears. This polar bear had few days with only surface swimming. She dove to intermediate depths frequently, and on multiple occasions she dove deeply (≥8 m on 36 different days, ≥10 m on 11 different days; max depth 13.9 m). Only a few of her diving events have associated location data, but these included deep dives (<8 m) made at locations both in drift ice offshore and at a coastal location. Considering all the polar bears with more than 100 recorded swimming events (transmitted by Argos or downloaded after recapture), 13 of 14 polar bears dove to ≥6 m.

“This is the first report of the diving capabilities of polar bears based on data from biologging instruments.

Most polar bears seldom dive beyond 3–4 m. However, they are clearly physically and behaviourally capable of diving to greater depths. One individual in the study stood out in this regard, by diving more regularly to greater depths. This individual might be a specialist in aquatic stalking, as she also dove when she was offshore in the drifting sea ice. Alongside swimming below ice floes during aquatic stalking, accessing coastal underwater resources such as cadavers or seaweed are likely reasons for the dives made by polar bears in this study. It is well documented that macroalgae is part of the polar bear diet. Lønø [1970] reported seeing a female polar bear and her yearling cub diving to a depth of 3–4 m in February to retrieve seaweed, which they consumed. The maximum dive depth reported in this study was 13.9 m. Within this depth range, breath-hold abilities are not likely to limit the depth of dives.”

In other words, while they could not determine the exact length of the dives from the sensor data, breath-holding ability did not appear to be a limiting factor for the depth of dives that were undertaken. During the 3 minute 10 second dive that Stirling witnessed, the bear was close to the surface the entire time, and the bear was in poor health at the time (very thin).

Bottom line: The results of this research suggest it is very unlikely that a 3 minute 10 second dive is anywhere near the maximum limit for polar bears, as Stirling and van Meurs claimed in their 2015 paper (see abstract below).  Polar bears in good health are excellent swimmers and proficient divers, abilities which are assisting them in coping with recent increases in open water in the summer. This flexibility is why polar bears are thriving despite much reduced sea ice in the summer compared to decades ago.

Other posts on this topic (with references):

Abstract
The maximum dive duration for a wild polar bear (Ursus maritimus) of any age is unknown, and opportunities to document long dives by undisturbed bears are rare. We describe the longest dive reported to date, by a wild undisturbed adult male polar bear. This dive was made during an aquatic stalk of three bearded seals (Erignathus barbatus) lying several meters from each other at the edge of an annual ice floe. The bear dove for a total duration of 3 min 10 s and swam 45–50 m without surfacing to breathe or to reorient itself to the locations of the seals. The duration of this dive may be approaching its maximum capability. Polar bears diverged from brown bears (Ursus arctos) about 4–500,000 years ago, which is recent in evolutionary terms. Thus, it is possible that the ability to hold its breath for so long may indicate the initial development of a significant adaptation for living and hunting in its marine environment. However, increased diving ability cannot evolve rapidly enough to compensate for the increasing difficulty of hunting seals because of the rapidly declining availability of sea ice during the open-water period resulting from climate warming.