Posted on January 12, 2018 | Comments Off on Consensus polar bear experts dealt with criticism differently in 2007

Frustration with criticism over the fate of polar bears decades into the future has plagued consensus experts since they first brought their concerns to the attention of conservation organizations in the mid-2000s. But now that catastrophe has not materialized, these researchers have shifted their defensive style from logical reasoning to relentless insult. 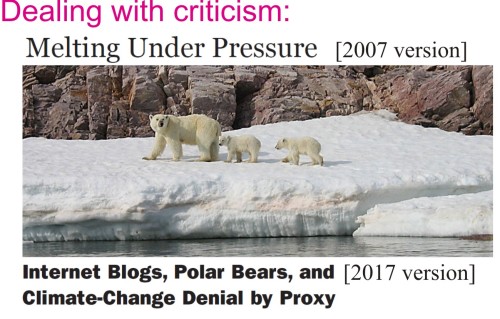 A decade ago, doubts about the veracity of the proposed ESA conservation status of “threatened” with extinction due to predicted effect of global warming came primarily through the media, who were seen to give critics a platform.

In a revealing article published 10 years ago in the fall of 2007 (before the ESA decision had been made) by polar bear biologists Ian Stirling and Andrew Derocher (“Melting Under Pressure: The real scoop on climate warming and polar bears”) in The Wildlife Professional, some of the same concerns were being raised as in 2017 by Harvey and colleagues (that including Stirling and fellow polar bear biologist Steven Amstrup) in BioScience (“Internet blogs, polar bears, and climate-change denial by proxy”), but the approach and the language is startlingly different.
END_OF_DOCUMENT_TOKEN_TO_BE_REPLACED