Posted on February 24, 2016 | Comments Off on Harp seal: most abundant Arctic seal is an undervalued polar bear prey species

The harp seal is the most abundant seal species in the northern hemisphere (estimated to number more than 9 million animals – that’s more harps than ringed seals) but are found only in the North Atlantic. Partly because they give birth on mobile pack ice, harps have their pups earlier in the season than all other Arctic seals, which means that in some regions, they are a critical food source for polar bears that have eaten little over the winter months. 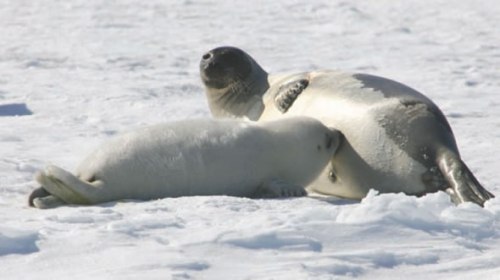 Most of the harp seals in the NW Atlantic/Atlantic Canada (about 80% of them) have their pups off Newfoundland and Labrador, an area known as the “Front” (the location of my polar bear attack novel, EATEN: special deals all this week). Harps seals at the Front now provide a huge prey base for polar bears of the large (and possibly still growing) Davis Strait subpopulation (photo below courtesy DFO Canada).

There are an estimated 7.4 million harps in Atlantic Canada today (range 6.5-8.3m), an exponential increase over the early 1980s, when perhaps only half a million so remained.  Pagophilus groenlandicus was assigned a conservation status of ‘Least Concern’ by the IUCN Red List in June last year (Kovacs 2015), when it was estimated that the global population size of the harp seal was greater than 9 million animals and probably growing1, 2 due to reduced human hunting:

“…harp seals have been harvested for thousands of years but currently the population is large and the number of animals harvested is declining.” [my bold]

Photographers and animial rights activists love cute, fluffy harp seal pups and rarely mention the carnage that goes on in spring as polar bears devour the naive youngsters. See the video below (from 2008), for an example of the cuteness factor.

END_OF_DOCUMENT_TOKEN_TO_BE_REPLACED

Comments Off on Harp seal: most abundant Arctic seal is an undervalued polar bear prey species