It’s now been 11 months since the IUCN Red List announced the completion of a new conservation assessment for polar bears – but you wouldn’t know that if you visited the website of the IUCN Polar Bear Specialist Group (PBSG). 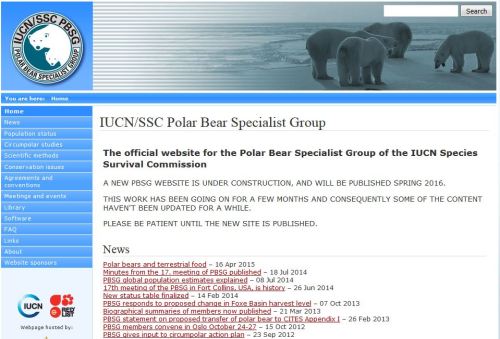 Back in May 2016, I wrote to the folks at the IUCN Red List asking them why the PBSG had not yet added a link to their website regarding the 19 November 2015 update to the Red List polar bear assessment (submitted by PBSG members in July 2015), a shortcoming I first notice in December 2015. I also inquired why the IUCN Red List folks were not taking the PBSG to task for their failure to keep the public informed of this new development.

After a wait of more than 6 weeks (23 June), I finally received a reply. The Red List official accepted as reasonable the PBSG excuse that since a link to the IUCN Red List was present on their home page as an icon (here), a direct link to the actual Red List polar bear assessment was not necessary. He was informed by the PBSG that the website upgrade had simply taken longer than expected but that it would be completed by the end of July.

And yet, here it is – almost three months later and still no revised website – and more importantly, still no mention of the 2015 Red List assessment update, see screencap above taken 18 October 2016 (which has been up since 14 January 2016).

Note that my complaint is not that the website upgrade has taken longer than expected (doesn’t it always?) – it’s about the continued refusal to provide a simple link to the 2015 Red List assessment at the top of their “News” feature which sits prominently on their home page.

The PBSG is considered the scientific authority on polar bears and in my opinion, the fact that for 11 months their website has lacked a link to the 2015 Red List assessment (which contains many significant changes, including a larger population estimate, a revised population trend, and a prediction of future change with error bars) raises concerns about transparency, potential bias, and lack of accountability of the PBSG organization – and displays a similar kind of contempt for the public that its chairman revealed back in 2014 when he said that population size estimates were “simply a qualified guess given to satisfy public demand.”

Copies of my email exchange with the Red List associate who answered my inquiry are below – decide for yourself if I’m over-reacting.

UPDATE 22 Nov. 2016: A cursory check of the PBSG website today revealed that a few days ago (16 Nov. 2016) the PBSG Chairman finally did what I have been suggesting for almost a year: post a simple notice and link to the 2015 IUCN Red List polar bear assessment.

A simple line in the NEWS section of the home page:

They even added a short notice with links to the documents (screen cap below).

Yes, pretty much exactly what I suggested in January. I’d hazard a guess I wasn’t the only one complaining.