This review was originally posted June 30, 2012 at my evolution blog here

It was picked up as a guest post at Hilary Ostrov’s blog “The View from Here” July 1, 2012 under the title Of polar bears, polemics and climate warming

THE ORIGINAL REVIEW, RE-POSTED BELOW WITH MY EMPHASIS, HAS AN UPDATE ADDED JULY 26 2012, FOUND BELOW THE REFERENCE LIST 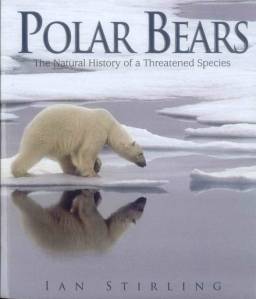 I recently came across a review of Ian Stirling’s latest book Polar Bears: The Natural History of a Threatened Species (2011, Fitzhenry & Whiteside) in the March 2012 issue of the journal Arctic, written by Arctic biologist Steven Ferguson. What is remarkable about Ferguson’s review is not what he says about the book but what he does not: lavish praise for Stirling’s polar bear stories but barely a mention of the book’s dismal predictions for the future. To be fair, all of the photographs in this book are outstanding (some are truly stunning) and the polar bear stories and life history information make for a fascinating read.

However, in reality this is not just a book about polar bears but a polemic discussion about the future of Arctic sea ice. Readers of Ferguson’s review might be surprised to find that there is an entire chapter dedicated to “climate warming” (“the game changer in polar bear conservation” according to Stirling). The climate warming chapter is as eye-catching in its own way as the rest of the book: who could miss the enormous, scary-looking graph predicting summer sea ice declining to zero within the next 90 years (described as a “NSIDC & NASA sea ice decay projection,” taken from Stroeve et al. 2007)? Or the two large photos, from different angles, of a bear that died in 1989 when its winter den collapsed? Oddly, such in-your-face photos and graphics seem not to have impressed Ferguson enough to warrant more than a few words in a list of topics covered (“models of future Arctic change”).

In contrast to Ferguson’s benign and somewhat fawning overview, my impression of the book was quite different.

Stirling uses his expertise as a senior polar bear biologist to inspire readers to trust his own acceptance of the dire predictions on the future of Arctic sea ice made by researchers in other fields. Stirling’s aim is that readers heed his take-home message (pg. 306): “it is vital that all humans and their respective governments use whatever time remains to help reduce greenhouse gas emissions sufficiently quickly to ensure that both sea ice and polar bears persist for our children and grandchildren to marvel at.” But can Stirling’s professional opinion be trusted as scientifically unbiased on this matter? I found in the book at least two instances that indicate to me that Stirling’s opinion on this matter is unreliable.

The first example is Stirling’s discussion of polar bear mortality events that took place in the Eastern Beaufort Sea from 1974 to 1976 (pg. 207), several chapters prior to the one on climate warming. Young ringed seals are the primary prey of polar bears. Stirling recounts that in the springs of 1974 and 1975 (and to a lesser extent in 1976), ringed seal populations in the shorefast ice dramatically declined and seal pup production fell by 80% or more — and as a result, survival of polar bear cubs “plummeted” (numbers not given) and many polar bear females were found in extremely poor condition (i.e. very thin). However, Stirling leaves out of this account one critical detail — that 1974 and 1975 were winters with especially thick ice development. He also leaves out of this discussion the fact that very similar polar bear mortality events, 2-3 years long, occurred again in the 1980s, the 1990s and probably the 1960s, and that these were all cold years with heavy ice (Stirling and Lunn 1997:178; Stirling 2002:68-69). While the repeated heavy sea ice conditions and cold are discussed in Stirling’s scientific papers regarding these events, these details are left out of the book. Why does the book present the events so differently? The answer is apparent once you get to the climate warming chapter. The 1980s polar bear mortality event does get a mention here, on pg. 285, but in the context of a discussion on progressively earlier dates of sea ice breakup over time. This juxtaposition gives readers the impression that the dramatic ringed seal and polar bear population declines of ‘74-’76 and ‘85-’86 were the result of too little ice (rather than too much), without saying so explicitly. The audacity of this misdirection is breathtaking.

The second example is the discussion of break-up dates for Hudson Bay, which are used by Stirling in his climate warming chapter to make a case for correlating declines in polar bear numbers, and their physical condition, with declines in sea ice and increased temperature. Hudson Bay freezes and thaws completely every year: the bay begins the freezing process in the fall (called ‘freezeup’) and melts completely by the end of summer (called ‘breakup’). The graph of breakup dates Stirling provides (Fig. 17, pg. 284) ends in 2007 (see below). 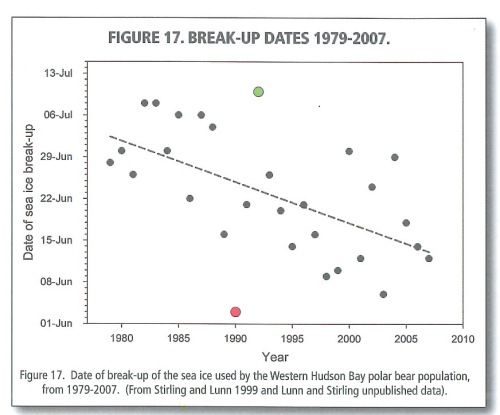 Really? For a book published in 2011? What about 2009, for example? In 2009, the Port of Churchill (on the west shore of Hudson Bay, 580 4’ N 094010’ W), did not open until Aug. 12, three weeks later than the average opening date for the port (July 21) and the latest opening date since 1974. This fact was reported in newspapers around the world at the time. Adding the very late date for 2009 would almost certainly have had more than a minor effect on the downward-sloping trend line on the graph Stirling presents for Hudson Bay breakup dates, which Stirling appears to have generated himself. Such breakup dates for the bay are calculated in a complicated fashion (based on data generated by the Canadian Ice Service, see Scott and Marshall 2010), so the opening date for the Port of Churchill will not be identical. Nevertheless, there is no getting around the fact that ‘breakup’ for Hudson Bay was exceedingly late in 2009. [I’ve looked for an updated version of Hudson Bay breakup dates that include 2009 (even contacting authors of previous reports) but it seems that no one has yet calculated this value.] Stirling does bring up the ice conditions of 2009 in his climate chapter, but only in relation to the late date of freezeup that fall — he leaves out of his discussion any mention of the very late breakup phenomenon earlier in the year.

If the case for progressively reduced Arctic sea ice due to “climate warming” over the last 35 years is so strong, why are these contortions of fact necessary?

In my opinion, the phenomenal scientific information Stirling conveys on the life history of the polar bear and his balanced account of the history of its conservation is irrevocably marred by these examples of biased presentation of events and data. With this book, Ian Stirling has broken my trust in him as a scientist. What could have been an outstanding reference book capable of wowing readers for generations with spectacular photographs and informative anecdotes is spoiled by Stirling’s willingness to leave out critical facts to make his advocacy statement appear better supported. Stirling’s attempt to dupe naive readers is contemptible and makes this book a shameful example of what the fear of global warming has done to science.

UPDATE JULY 26
I just discovered the Canadian Ice Service page for generating graphs of data from their archive, http://dynaweb.cis.ec.gc.ca/IceGraph20/page1w.jsf Using that, I was able to compare 2009 to several other years.

Below is 1981 (the first year CIS had complete data and the start of their averaging period) with 2009: 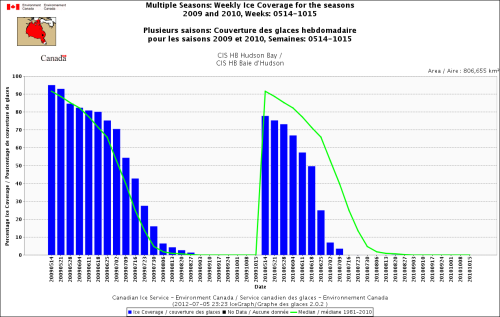 ‘Breakup’ is usually defined as the point where 50% of the bay is ice-free, usually determined officially from a point-by-point calculation over a grid (see the Scott and Marshall 2010 paper listed above for example). However, in general terms, it looks like we likely passed ‘breakup’ sometime in late June of this year.

Stirling used passive microwave data supplied by NASA for his graph rather than the CIS ice charts (described and updated to 2004 in Stirling and Parkinson 2006, “Possible effects of climate warming on selected populations of polar bears in the Canadian Arctic” open access here: http://arctic.synergiesprairies.ca/arctic/index.php/arctic/issue/view/16.