Posted on December 5, 2013 | Comments Off on Tracking polar bears in the Beaufort Sea: November map

The track map for November is copied below (Figure 1).

By the end of November, ice covered the entire Alaska coast. Six of the bears that were being tracked in October were still present (down from ten in July) and one bear that went Arctic walkabout in October has returned. So, a total of seven bears were tracked in November. 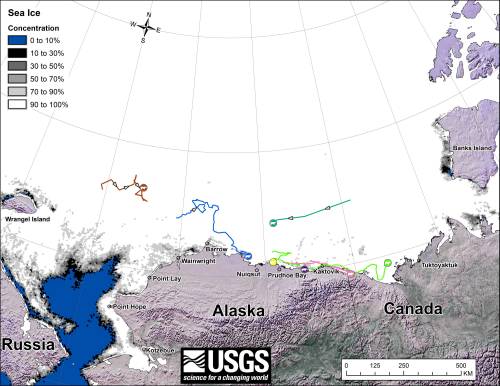 Figure 1. From original caption: “Movements of 7 satellite-tagged polar bears for the month of November, 2013. Polar bears were tagged in 2013 on the spring-time sea ice of the southern Beaufort Sea. All 7 of these bears have satellite collar transmitters.” Note that the dots with the polar bear icons are the end points (end November), while the other end of the string is their position in early November. The teal green female, who was on the September map but disappeared during October, has returned from her little sea ice sojourn.

A few things to note:
The female with the dark brown track is still in the Chukchi Sea subpopulation region. She was in the Southern Beaufort in early October (Fig. 2, below) but moved west that month and has stayed.

The female (light brown) that was on Banks Island at the end of September (Fig. 3) has now moved out of the region altogether — or her collar has stopped transmitting.

Four females are on or near shore on the north coast of Alaska, east of Barrow, and one (light green) looks to be headed toward Tuktoyaktuk in the eastern (Canadian) Beaufort, moving just offshore along the ice.

That’s three out of ten polar bears leaving the Southern Beaufort subpopulation region over a few months, which seems like a lot of cross-boundary movement for such a small subsample. It’s probably not that unusual but illustrates one of the reasons why counting polar bears accurately can be a bit difficult. More on that another time.

Figure 2. Tracks for the month of October, 2013. Note that the dots with the polar bear icons are the end points (end October), while the other end of the string is their position in early October.

The map for September 2013 is below, for comparison: 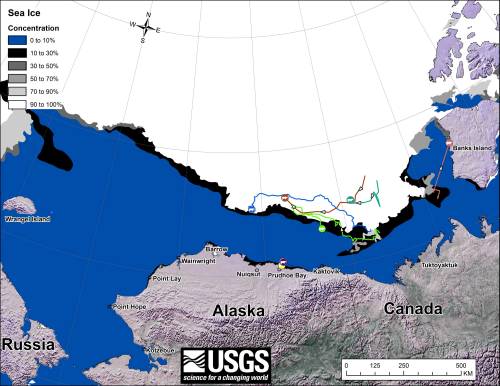 Figure 3. Tracks for 8 satellite-tagged polar bears for September, 2013. Note that the dots with the polar bear icons are the end points (end September), while the other end of the string is their position in early September, indicating that the ice is now moving towards the shore. The pink dot present in August is almost entirely obscured by the purple dot, on shore in Alaska and the light brown dot is ashore on Banks Island, centre right of the map.