Thick spring ice along the shore of the Eastern and Southern Beaufort is bad news for polar bears, especially females emerging from their dens with new cubs. Are those conditions developing now? 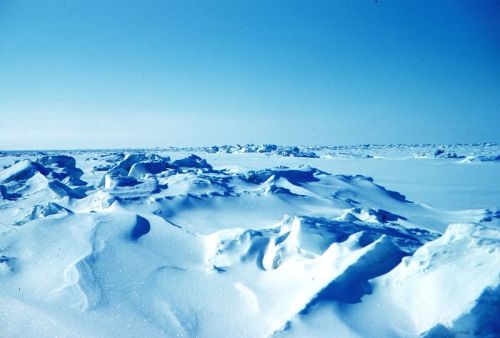 Every 10 years or so, since at least the 1960s, nearshore ice gets too thick for ringed seals to maintain their breathing holes and many breeding seals depart the area. This leaves a lot of polar bears without the baby seals they need to consume to get them through the rest of the year (that’s if they don’t (or can’t) leave themselves).

I’ve discussed various aspects of this phenomenon before, with references – see the list at the end of this post.

So, prompted by reports of the heaviest sea ice conditions on the East Coast “in decades” and news that ice on the Great Lakes is, for mid-April, the worst it’s been since records began, I took a close look at ice thickness charts for the Arctic. I’m not suggesting these conditions are necessarily related to Beaufort ice, just that they got me thinking.

Below is a similar image from about the same time last year, with the Southeast Beaufort Sea marked. 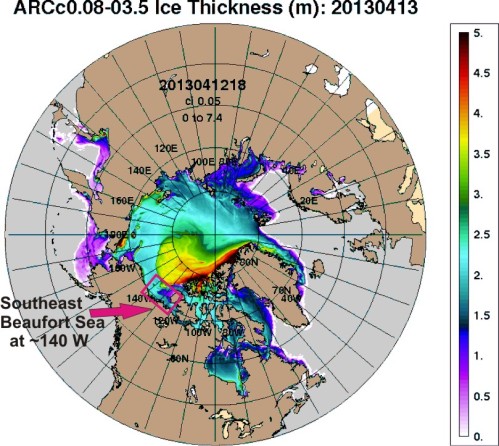 I don’t think this bodes well for Beaufort bears but we’ll have to wait and see if there are any reports of starving bears bit later this spring and summer. Sea ice charts aren’t a guarantee that this heavy spring ice phenomenon is developing in the Beaufort, but they could be a warning.

Below are archived ice age charts from the US National Snow and Ice Data Center (NSIDC) for some previous years when Beaufort bears had trouble, especially 2004-2006, with which I compare this year’s conditions. [h/t Steve Goddard for alerting me to this resource]

I’ve used Week 13, noted in the lower left of each chart (the latest available for this year at NSIDC), which is usually the last week of March. The ice is mapped by age: first year ice that’s formed this year, 2 year old ice (survived the last summer’s melt), and so on up to “5+” (which is very thick multiyear ice that has survived five or more summer melt seasons). The year of the chart is beside the week indicator, toward the middle.

I’ll start with the archived chart for this year, 2014. And to show you that this pattern indeed varies year to year, compare 2014 to 2010 and 2008, which follow. These charts are rotated relative to the ones above – the Alaska coast in these ones is in the upper left. ↓

Look at the development of ice during the last bad ice years for polar bears below, which occurred from 2004-2006 (and which Alaska polar bear researchers blame on reduced summer ice).

A few more below, from other heavy ice springs, same week.

Unfortunately, the archive does not go back to 1974, when the really bad conditions occurred.

Related posts on this topic:

Polar bears move around as sea ice habitat changes – this is what resilience looks like Posted April 14, 2014

Why is it that every decade, Eastern Beaufort sea ice gets really thick? Posted June 28 2013