In an attempt to get themselves out of a mess of their own making, the IUCN Polar Bear Specialist Group (PBSG) has just dug their hole even deeper.

“K. Laidre summarized the need for the PBSG to do a better job of communicating accurate and balanced science about polar bears.” Pg. 28

Due to the flack they have been catching over their global polar bear population estimates, the PBSG determined that another clarification was in order. [As opposed to the first clarification, a footnote the group planned to insert in an upcoming report, which PBSG chairman Dag Vongraven sent to me in May)]

The new clarification, apparently co-authored by Steve Amstrup and Andy Derocher (PBSG 17 minutes, pg. 33 – copied below), makes an astonishingly bold claim that I can easily show is untrue.

Before the minutes were posted (on July 18), on July 8th the group published (without fanfare) a “news” item called “PBSG global population estimates explained” (pdf backup here). The announcement linked to a clarification in a new “Global Estimates” section of the “Population Status” portion of the menu sidebar, entitled “Global polar bear population estimates.”

Shaking my head in amazement, but having other things to do just then, I left it for a few weeks. Looking at it again a few days ago, I saw it had been revised on July 11 (pdf backups: July 8 version; July 11 version).

It’s interesting to see what was removed/added and what was not.1 And of course, impossible to tell who objected to the offending parts in the original, and why, because it was changed with no explanation – simply left as if that was what had been originally posted. [Good thing I’ve learned to take screen-caps]

However, what did not change was the point I wanted to raise in this post.

The bits that caught my attention are highlighted below (from the 1st to 3rd paragraphs, out of the four paragraph document published on July 8), the points of contention in red:

“The PBSG first provided a global population estimate for polar bears in 1993. The range specified at that time, 21,470-28,370 polar bears, included statistically solid estimates (e.g. based on studies to estimate population abundance) for many of the identified polar bear subpopulations, and estimates (based knowledge of habitat quality and input from scientists) for several other subpopulations. Recognizing the false precision implied by a range of 21,470-28,370, the estimate was rounded to 22,000-27,000 in 1997. After some new population estimates were developed and after more discussion of the possible numbers in areas without estimates, the range was adjusted to 21,500-25,000 in 2001, and further simplified to 20,000-25,000 in 2005. The variation in ranges reflects the absence of rigorous estimates of subpopulation size in several areas and the consensus desire to express a reasonable round number range that could not be interpreted as more reliable than it really is. [One word in first sentence changed on July 111]

“Over the years following the first global range estimate, the PBSG has refined subpopulation size estimates in some areas, but there still are areas where we have only educated hypotheses regarding numbers of animals present.  …  These estimates, descriptions of how they were developed, and the history of how they have been improved over the years, can be viewed in the population status tables (to be viewed in the proceedings). Until 2005, the PBSG status table also included estimates for 3 subpopulations (Chukchi Sea, Kara Sea, and Laptev Sea) where accepted methods never had been applied. These estimates were removed because including them in the table suggested they were more reliable than they really were. The PBSG has never provided estimates for two other regions (Arctic Basin and East Greenland). Bear numbers in the Arctic Basin are very low and bears present there may simply be passing through rather than representing a true subpopulation. East Greenland appears to have a small resident group of polar bears but the PBSG has never ventured an estimate of their abundance. [no change in this paragraph that I could see between July 8 and July 11]

[What the heck is “a consensus desire” (last sentence, paragraph 1)? Never mind, for now…]

What the PBSG are finally trying to explain are the population estimates removed from status tables in 2005 and 2009 (the Laptev Sea estimate was dropped in 2013) – not mentioned in the text of the various reports at the time – that I called attention to last year.

“Between 2001 and 2005 the ‘Queen Elizabeth Islands’ region in northern-most Canada (see map above) was dropped altogether as a distinct subpopulation (along with its estimated 200 bears) and the tentative total of 2,000 bears estimated for ‘East Greenland’ was also dropped (from both minimum and maximum portions of the “21,500-25,000” range).”

Now, the PBSG say they never gave a population estimate for East Greenland or the Arctic Basin. Oh, really?

Have a look at the screencap from the 2001 report (Lunn et al. 2002). From page 22, here is Table 1, with a listing for East Greenland and its population abundance estimate of 2,000 bears, and Queen Elizabeth Islands (the old name for “Arctic Basin”), listed with an abundance of 200 bears. 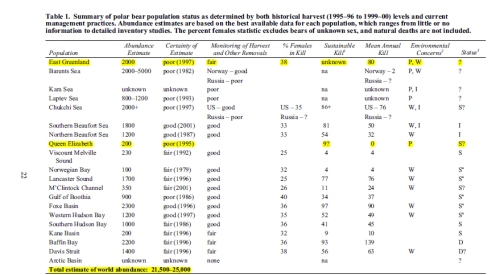 In 2001, the PBSG estimated that the number of bears in East Greenland amount was about 2,000 – now (in the July 8th version) they say it would be only a few hundred (~650), although they have now removed that information and replaced it with an estimate for all of the unsurveyed regions together.

Figure 2. Map of polar bear subpopulation boundaries, from the 2001 PBSG meeting (Lunn et al. 2002) and descriptions of the “Queen Elizabeth Islands” and “Arctic Basin” subpopulations (from Lunn et al. 2002 and Obbard et al. 2010), showing how they are one and the same as far as the PBSG population estimates are concerned. Click to enlarge.

It appears that, in the supposed process of doing a better job of communication and being transparent, Amstrup and Derocher chose to deny ever having provided educated guess-type population estimates for the Arctic Basin and East Greenland. Why even bother, when it is so easy to show they had?

And I wonder, how does Kristin Laidre feel now about being part of a group that thinks this is “accurate and balanced” communication?

Footnote 1: Differences between the two versions noted below (deletions in bold black, additions in red).

It’s rather interesting that Amstrup and Derocher, who were given the job of drafting the document, could not resist the urge to editorialize about “threats” of global warming and declining sea ice – and that someone clearly objected (the “editorial” bit has been removed, paragraph 4 below).

Third paragraph
July 8: “For the 14 subpopulations with scientific estimates, the sum of the mid-point estimates is 18,349 bears (see status table for estimates). Adding the approximately 6000 bears the PBSG hypothesized could be in the Chukchi, Kara, and Laptev seas, would bring the estimate to 24,349. An unknown number of polar bears in East Greenland brings the midpoint estimate to approximately 25,000.”

July 11: “For the 14 subpopulations with scientific estimates, the sum of the mid-point estimates is 18,349 bears (see status table for estimates). The PBSG expects that the number of bears ranges from several hundreds to a few thousands in each of the subpopulations in Chukchi, Kara, Laptev and East Greenland, bringing the midpoint estimate to approximately 25,000.”

Fourth paragraph
July 8: “Because the global population estimate range includes subpopulation estimates of variable quality it is not used as a monitoring benchmark or other status assessment tool. Rather, it simply expresses a reasonable range in numbers, based on a combination of the best available information and understandings of polar bear habitat. Conservation assessments focus on the trends in subpopulations for which statistical estimates are available. Some of those subpopulations are declining, others are stable, and some may be increasing. Because polar bears depend on the surface of the sea ice for catching their preferred prey, the main conservation threat is global warming induced sea ice loss. Regardless of current global or subpopulation trends, declining sea ice availability ultimately is a threat to all polar bears.”

July 11: “Because the global population estimate range includes subpopulation estimates of variable quality it is not used as a monitoring benchmark or other status assessment tool. Rather, it simply expresses a reasonable range in numbers, based on a combination of the best available information and understandings of polar bear habitat. Conservation assessments focus on the trends in subpopulations for which statistical estimates are available. Some of those subpopulations are declining, others are stable, and some may be increasing.”