The first-ever population estimate for polar bears in the Kara Sea is an astonishing 3,200 bears (range 2,700-3,500). Russian researchers report the results in a new paper (Matishov et al. 2014, in English). 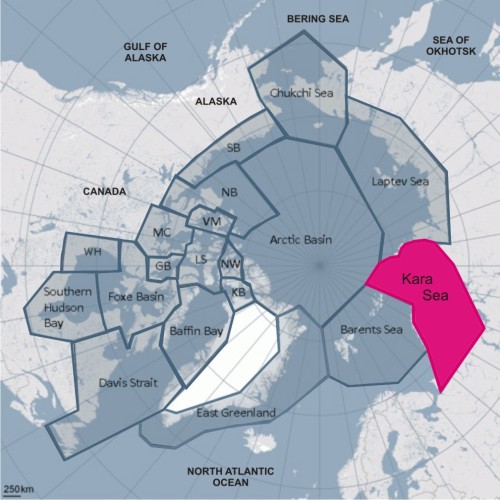 Polar bear counts were made during late winter/early spring (approximately January to April) from ice-breakers between 1997 and 2013. Females with cubs (whether one or two) were noted. The counts were extrapolated to give a total for the entire region (as is usual for all such surveys).

The question is, will the IUCN Polar Bear Specialist Group (PBSG) consider this new polar bear count to be reliable or complete enough to include in their next IUCN assessment? 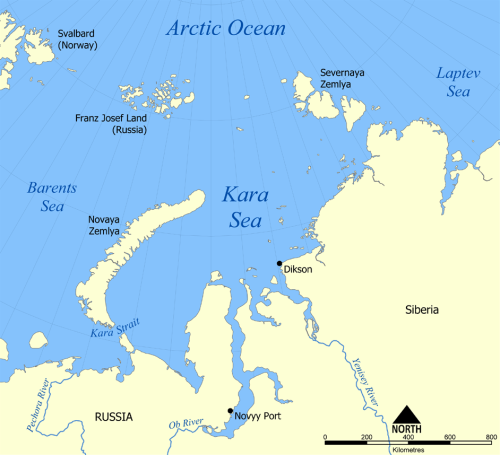 The Kara Sea is a largely enclosed, shallow sea that is ice-free in summer and essentially covered with first year ice during winter/spring. Map courtesy Wikipedia.

This is how the authors described their study:

This paper presents the results of the first calculation of the amount of polar bears on the basis of vessel counts of the Murmansk Marine Biological Institute, Kola Scientific Center, Russian Academy of Sciences in the Kara and Barents seas. The polar bears were counted on routes with a width of the counted band of 1 km along each board.”

Figure 1 from Matishov et al. 2014, showing the study region and tracks of ice-breakers used to count bears. Original caption: “Position of ice-breaker routes providing the count of polar bears in the Kara and Barents seas from 1997 until 2013 for 32 counted routes. The dashed line indicates the approximate boundaries of habitat of the subpopulation of polar bears of the Kara Sea [4].”

According to the text and maps provided (including Fig. 2 from the study, below), this number appears not to have included bears in Franz Josef Land or bears along the west coast of Novaya Zemlya (see Wikipedia map above). 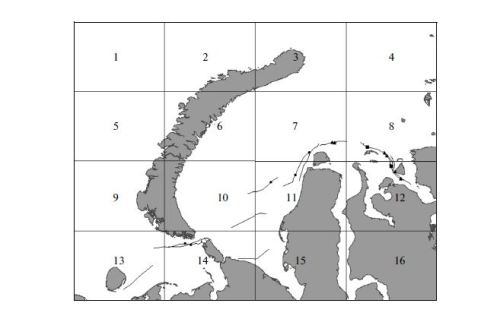 Figure 2 from Matishov et al. 2014, showing areas covered by the survey in 2013. Original caption: “Schematic map of division of the counted territory in January–March 2013 into 16 sectors of separate extrapolation. Circles, triangles, and squares mark the meetings of individual bears, females with one bear cub, and females with two bear cubs, respectively.”

This means the recent count was largely confined to the “Kara Sea” polar bear subpopulation region as defined by the PBSG (see map below).

The last PBSG assessment (February 2014) listed the Kara Sea subpopulation as “data deficient.”  But it turns out there are not just a few polar bears living in the Kara Sea, there are about three times as many as live in Western Hudson Bay. 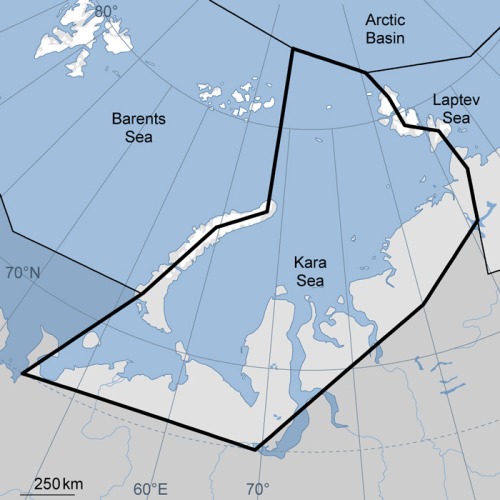 I’m going to guess that these new Kara Sea numbers will indeed be included in the next polar bear assessment. Why? Because the the PBSG have been told by the IUCN that they need numbers for all Arctic regions for their next IUCN Red List assessment (to plug into the predictive models intended to show that within 30-36 years, polar bears will decline enough to warrant keeping their ‘vulnerable’ status).

I could be wrong but the need for numbers might just trump other criteria.

With Southern Beaufort and now Kara Sea taken care of, the PBSG still need new or updated population estimates (for their predictive models) for the Arctic Basin, Chukchi Sea, Barents Sea, Laptev Sea, East Greenland, Baffin Bay, Kane Basin, Lancaster Sound,  and Norwegian Bay. That means there should be quite a few papers announcing new polar bear counts over the next few months.