Posted on April 18, 2015 | Comments Off on Polar bear encounter in the Canadian High Arctic reminiscent of recent attacks 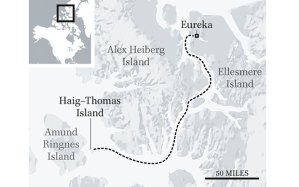 One morning this week we found that the bear warning system had been set off, but the cartridge hadn’t fired. We tried with a fresh cartridge to find that it also failed. Then we tried firing our shotgun – our emergency back up. Five shots = five misfires. It seems that temperatures are so low that cartridges are just useless. None of the other polar teams had mentioned this – and we wonder if everyone has been blissfully unaware.

It’s more than a little worrying to think that we have wrongly spent every night since leaving Greenland sleeping soundly in the belief that our trip wire was protecting us from bears. If the shotgun is also useless then our only defence is an ice-pick borrowed at the last minute in Qaanaaq.

The reality of a dodgy warning system was brought home this week. After a good day sledging we were in our tent reading when we heard the sound of crunching snow. Al and I looked at each other, both hoping it was a fox as we’d seen tracks all day. But as Al peeked out of tent he immediately announced, “Bear!”

He made a grab for the shotgun and I untangled myself from the sleeping bag and began shouting loudly hoping to startle it away. A few dozen yards away an adolescent bear simply stared at me, sniffed the air and came closer. Al decided to fire a warning shot, hopefully close enough to kick up some snow, something we had been advised to try in Qaanaaq. The gun ‘clicked’ but didn’t fire. I made for the pulk and grabbed a pen flare while Al seized a saucepan and banged loudly. The bear couldn’t have cared less and kept coming, albeit slowly. I lit the flare and threw it at the bear’s feet where in fizzled in the snow.

Then I remembered that we had decided to store some cartridges in our clothing hoping to keep them active with body heat. Loading two fresh cartridges into the shotgun I aimed close to its rump and fired. Finally, with a startled shudder, the bear finally turned away. Al and I were both shivering – whether from adrenaline or perhaps just because we had come from the tent in our base layers without coats.

“A Harrowing Encounter” – my published review of “Meltdown” February 26, 2015