Posted on June 24, 2015 | Comments Off on Many polar bears cubs seen in Svalbard this year, says Norwegian biologist

Good news from Norway: polar bears around Svalbard are in excellent condition this spring and many females with new cubs have been spotted. This is a marked turn around from conditions just last year. 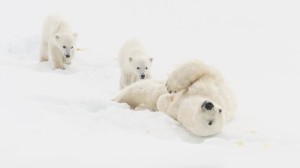 According to a Norwegian news outlet yesterday, Jon Aars (Fig. 1, below), from the Norwegian Polar Institute, confirms that this has been an excellent year for polar bear cubs around Svalbard because there has been abundant sea ice near denning areas on the east coast.

In an interview with Norwegian broadcaster Sigrid Agnethe Hansen (23 June 2015), polar bear biologist Jon Aars from the Norwegian Polar Institute said (via Google Translate and some inference on my part for a few words):

“Last year [2014] in autumn we saw that there was more ice, particularly in denning areas. And throughout the year the ice conditions have held up good… It has been an excellent year, with a lot of ice. It appears that there are many females in good condition that have cubs of the year, and the cubs appear to be in good shape…. Many of the females we saw this year had cubs, and it is natural to believe that the abundance of ice exerted a positive effect. It may be a little difficult to say they [the bears?] are completely safe, as we can not always explain all the variation we see. But it is safe to say [?], that a bad ice year can contribute to the reason why the count of cubs are poor [or low].” [my bold]

Read the whole thing here, in Norwegian [note “isår” is “ice year”; Google Translate offered me “Hungarians” for the word “ungar” which made for an amusing read until I figured out the right word was “cubs” – strictly speaking, “young ones” (as in, “mothers with cubs” rather than “mothers with Hungarians”). Many thanks to Bjorn L. for passing this along with a few translation tips]  More photos of Svalbard polar bears here.

That would explain why few females with cubs were seen in the spring of 2014 around Svalbard – most mothers pregnant with cubs had moved to Franz Josef Land, so that’s where the cubs would have been born. Based on interviews with Jon Aars, media outlets (e.g. the Guardian, 28 May 2014 and CBC, 29 May 2014) made this phenomenon sound like a catastrophe that could only get worse.

One short year later, it’s a completely different story with a very happy ending. The improved ice conditions over last year are almost certainly due to the recent change in state of the Atlantic Multidecadal Oscillation (AMO) [more here] with perhaps some influence from the newly-described Madden-Julian Oscillation (MJO), which tends to affect sea ice from November to January (Henderson et al. 2014).1

Such natural variations in sea ice conditions that occur outside the summer season (and which are strong enough to negatively affect local polar bear populations) are the topic of my recent Arctic Fallacy paper published by the Global Warming Policy Foundation (Crockford 2015).

Time will tell if the Guardian and the CBC are as eager to report the positive change this year.

[Note, this is the same Jon Aars who gave numerous media interviews a couple of weeks ago regarding the phenomenon of a Svalbard polar bear eating a white-beaked dolphin in April 2014 that got hyped around the world. Somehow, the pronounced turn-around in sea ice conditions that was in progress at the time the dolphin eating occurred (Svalbard had average or above-average sea ice from early August onward, Fig. 3 below) did not enter into the story – if Aars mentioned it, the media didn’t report it.] 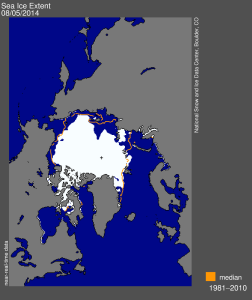 Figure 3. Sea ice extent at 5 August 2014. Almost everywhere except Svalbard was below average; Svalbard had more ice than usual. Click to enlarge.

Polar bears move around as sea ice habitat changes – this is what resilience looks like April 14, 2014

Footnote 1. From the NSIDC report for October 2014:

Arctic sea ice and the Madden-Julian Oscillation
A new study looks at the impact of a different mode of large-scale atmospheric variability, the Madden-Julian Oscillation, which appears to impact the ice cover on a shorter 30- to 90-day time scale. The Madden-Julian Oscillation is primarily driven by convection in the tropics, but causes changes in atmospheric circulation that impact the high latitudes. The impact on sea ice was found to be stronger during the winter season than in summer. It affected both the Atlantic and Pacific sectors and was confined to the marginal ice zone [which “extends 100 to 200 km from the ice edge into the ice pack, where waves and swells affect the ice”]. The impact on sea ice also varies regionally, often showing opposing effects, such as between the Barents and Greenland seas in winter. [my bold]

Abstract
Arctic sea ice responds to atmospheric forcing in primarily a top-down manner, whereby near-surface air circulation and temperature govern motion, formation, melting, and accretion. As a result, concentrations of sea ice vary with phases of many of the major modes of atmospheric variability, including the North Atlantic Oscillation, the Arctic Oscillation, and the El Niño-Southern Oscillation. However, until this present study, variability of sea ice by phase of the leading mode of atmospheric intraseasonal variability, the Madden–Julian Oscillation (MJO), which has been found to modify Arctic circulation and temperature, remained largely unstudied. Anomalies in daily change in sea ice concentration were isolated for all phases of the real-time multivariate MJO index during both summer (May–July) and winter (November–January) months. The three principal findings of the current study were as follows. (1) The MJO projects onto the Arctic atmosphere, as evidenced by statistically significant wavy patterns and consistent anomaly sign changes in composites of surface and mid-tropospheric atmospheric fields. (2) The MJO modulates Arctic sea ice in both summer and winter seasons, with the region of greatest variability shifting with the migration of the ice margin poleward (equatorward) during the summer (winter) period. Active regions of coherent ice concentration variability were identified in the Atlantic sector on days when the MJO was in phases 4 and 7 and the Pacific sector on days when the MJO was in phases 2 and 6, all supported by corresponding anomalies in surface wind and temperature. During July, similar variability in sea ice concentration was found in the North Atlantic sector during MJO phases 2 and 6 and Siberian sector during MJO phases 1 and 5, also supported by corresponding anomalies in surface wind. (3) The MJO modulates Arctic sea ice regionally, often resulting in dipole-shaped patterns of variability between anomaly centers. These results provide an important first look at intraseasonal variability of sea ice in the Arctic.