Two out of seven polar bears with collars in the Southern Beaufort Sea either spent the month of August on ice that satellites couldn’t see – or they spent the entire month swimming around the Beaufort. Which seems most likely?

See previous discussions here and here regarding the problem satellites have in accurately detecting melting ice. The presence of these two bears is evidence that there is more polar bear habitat than satellites record as officially present. This was also an issue for Hudson Bay bears earlier this year.

Five out of the seven visible females were on the ice in August – but are the other six bears that were visible last month spending the summer in the Arctic Basin like the one I reported last week? Or have their collars actually failed or dropped off? USGS isn’t saying.

See the August track map below, from the USGS Tracking Polar Bears website1 and a sea ice map.

The USGS track map for August 2015 is copied below, original here (Fig.1).

There were thirteen females with satellite collars in July 2015 — but those were down to seven in August. Two of the seven were on shore, five were on ice or “open water” that is probably broken ice or melt ponds over ice. The six “missing” bears may be spending the summer off the map in the Arctic Basin – or their collars may have failed.

Figure 1. Original caption: “Movements of 7 satellite-tagged polar bears for the month of August, 2015. Polar bears were tagged in 2014 and 2015 on the spring-time sea ice of the southern Beaufort Sea. All 7 of these bears have satellite collar transmitters. Polar bear satellite telemetry data are shown with AMSR2 remotely-sensed ice coverage for 30 August, 2015.” Click to enlarge. Original here. Figure 2. Original caption: “Movements of 13 satellite-tagged polar bears for the month of July, 2015. Polar bears were tagged in 2014 and 2015 on the spring-time sea ice of the southern Beaufort Sea. All 13 of these bears have satellite collar transmitters. Polar bear satellite telemetry data are shown with MODIS imagery from 23 July, 2015.” USGS.

Note that the circles with the polar bear icons are the end points (final positions for the month), while the tail ends of the strings are the positions at the first of the month. Compare to July 2015 above (Fig. 2) and August 2014. 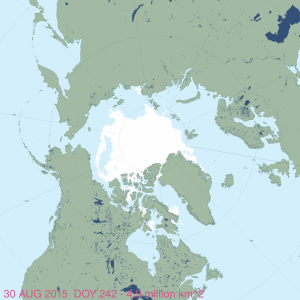 Footnote 1. This is the August 2015 follow-up to my post on the July 2013 track map for female polar bears being followed by satellite in the Beaufort Sea by the US Geological Survey (USGS) – “Ten out of ten polar bears being tracked this summer in the Beaufort Sea are on the ice.” See that post for methods and other background on this topic, and some track maps from 2012 (also available at the USGS website here).