Summer refuge for polar bears in Arctic Basin only 0.3 mkm2 below its possible maximum

Posted on September 22, 2015 | Comments Off on Summer refuge for polar bears in Arctic Basin only 0.3 mkm2 below its possible maximum

At the seasonal minimum 2015, the Arctic Basin was still almost full of sea ice, down only 0.3 mkm2 below the maximum it could ever be. 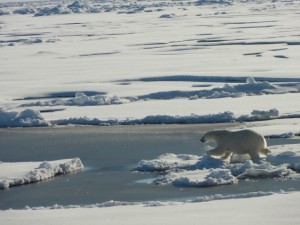 Remember that spending the summer in the Arctic Basin for most polar bears is just like sitting on the western shore of Hudson Bay – they are all waiting for the refreeze. In either location, they might find something to eat, they might not.

Ice extent in the Arctic Basin was the same (2.9 mkm2) at this year’s September minimum, officially 11 September 2015, below: 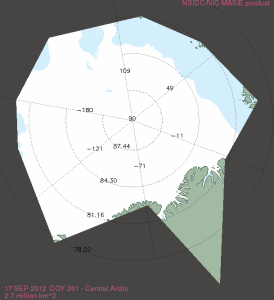 However, in 2007 (below), the Arctic Basin was even smaller: 2.6 mkm2 at the seasonal minimum, yet polar bears continued to do well. Southern Beaufort bears began their recovering from the thick spring ice conditions of 2004-2006, see previous posts here and here) and even though most of the melt was in the Chukchi Sea, polar bear in 2008 were found to be in excellent condition and reproducing well.