Beaufort Sea polar bear habitat highest since 2008 at this date

Posted on October 25, 2015 | Comments Off on Beaufort Sea polar bear habitat highest since 2008 at this date

Good news for Southern Beaufort polar bears! Sea ice converging on the north shore of Alaska earlier than any year since 2011 at least, according to NSIDCs regional ice plots (below). 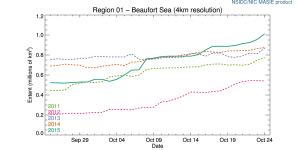 But wait, their Masie ice maps show it’s actually the earliest since 2008 (although the ice movement onshore was also earlier than 2006 and 2007, see below). And it’s still a full week before the end of October, the first month of Arctic fall (October-December). Lot’s of seal hunting habitat.

This emphasizes the fact that the primary problem faced by Southern Beaufort sea polar bears is not scarce summer ice but by thick sea ice conditions in the spring. Bears photographed near Kaktovik this year were in excellent condition (see here and here, taken by Kelsey Eliasson, Polar Bear Alley). If folks have been seeing starving bears, they haven’t said anything that I’ve been able to find.