Posted on February 22, 2016 | Comments Off on Spring sea ice prediction by CIS for Atlantic Canada 2016 vs. observations

The Canadian Ice Service prediction for spring ice coverage for Atlantic Canada in 2016, released 1 December 2015, would be as extensive as 2014 and 2015 or greater.

In my December 2015 post that reported this prediction, I compared it to past ice coverage at 19 February. But that date is now past: how does the predicted ice coverage compare to reality (i.e., observations)? Have a look below.

Ice concentration charts for Newfoundland and the Gulf of St. Lawrence:

Later this week I’ll discuss what this might mean for the harp seals that usually have their pups on the sea ice in the Gulf in the first week of March.

However, the current ice levels off Newfoundland and Labrador are great news for Davis Strait polar bears, some of whom are already in the area waiting for the birth of harp and hooded seals.

One final note: I recently found this image of Gulf sea ice from 2013: to me, it looks pretty close to 2016 conditions. 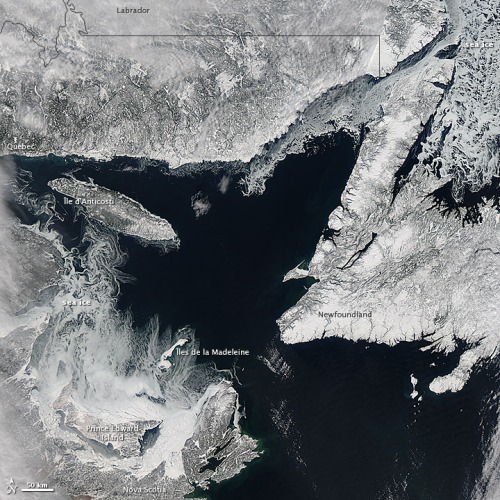 This entry was posted in Sea ice habitat. Bookmark the permalink.