Posted on June 6, 2017 | Comments Off on Dead polar bear washed ashore in NE Newfoundland, cause of death unknown

A dead polar bear was found on the shore of northeastern Newfoundland yesterday but the cause of death has not yet been determined.

“[Ann] Peddle of Bristol’s Hope was out for her morning walk when she came across the carcass of a polar bear that had washed ashore. The carcass had drifted between the rocks near the wharf in Bristol’s Hope, according to Peddle.

Peddle took some quick photos of the bear to post to social media before contacting the wildlife department at around 8:30 a.m.”

Ann Peddle took the photo below, which was printed with the above story: 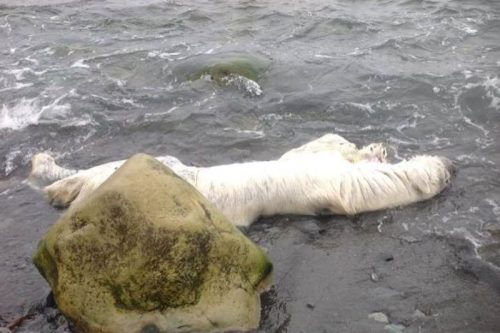 See the map below for the location of Bristol’s Hope in NE Newfoundland, along the west shore of Conception Bay  (see map at end of post for the names of the bays): 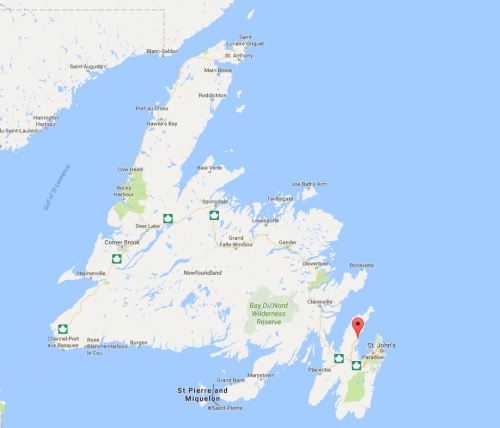 Was this a death by drowning or some other, more likely cause?

Bears die natural deaths all the time, as all wild animals do. For polar bears, the most common cause of death is starvation — either because they are young, inexperienced hunters or too old and weak to keep stronger bears from stealing their kills.

In addition, however, males sometimes die from wounds inflicted during fights over access to females during the mating season — or they die of starvation sooner or later because they are too injured to hunt or eat effectively (like the famous starving bear with the injured leg promoted by the photographer in 2015 to advance the ‘fight’ against global warming, which polar bear biologists renounced). Females can be injured trying to protect their cubs from attack by males, which might have the same ultimate result (death by starvation).

Less often, as far as we know, they could also die of accidental drowning while swimming long distances or by being crushed by compacting pack ice.

Since the mating period and intensive feeding season for polar bears have just ended, it is most likely that one of the two most common causes (starvation and/or injuries from fighting) is the cause of this bear’s death, although under the circumstances drowning is the option most people will think of first.

It is not possible to tell from the photos released of the dead bear whether there are injuries to its head from fighting (or from being shot, also a slim possibility). Nor can we tell its sex or age. But the bear does look lean for this time of year, which suggests it may not have been feeding adequately. There is also no way to know if this is a bear who had recently come ashore as many did earlier in the season and got caught without ice to walk out on, and therefore tried to find the pack by swimming.

More information may be forthcoming, or not, after conservation officers have had a closer look.

Here are the regional ice conditions on the day the bear washed ashore (5 June):

Detailed ice concentration map for 28 May (the week before) show two distinct patches of thick ice off Newfoundland (one socked in to White Bay and Notre Dame Bay and the other in Bonavista Bay), with a small tongue of ice extending east to Conception Bay where the polar bear was eventually found:

Two weeks ago (see map below for 20 May), the ice off Newfoundland had a tenuous connection across the region but that soon broke up into the two masses shown above: one rapidly disintegrating one in the east and another solid piece of thick first year ice (70-140 cm thick) in the west.

If a bear got caught in the eastern section of the ice, he would have had to swim west to remaining ice jammed against the Great Northern Peninsula but if he was on a piece of ice that broke free and drifted east, it would have taken him further away from the existing pack. However, it is possible he was already dead, drifting on a piece of melting ice.

If the bear was still alive and tried to swim west, he might have drowned in the attempt but we won’t know that for sure unless a necropsy is performed and the results announced. This does not always happen, unfortunately, so we may never know for sure.

Polar bears can of course get caught short by melting ice condition in late spring and early summer off Labrador and Newfoundland but it depends on when and where the bears are (either ashore or on the ice) and the sea ice conditions at the time.

This year, virtually all of the polar bear landings ashore were in March and April (one early May), at a time when there was lots of ice around. Which means the bears would not have to swim back to the Arctic, they could walk.

Not a problem for most bears, as they can walk thousands of kilometres. Most of the bears that visit Newfoundland and southern Labrador end up on the south coast of Baffin Island over the summer.

But if a bear comes ashore late in the season (April/May) when there is little ice around, or in a location where there is little local ice, it would have to swim to the nearest ice flow and then walk the rest of the way (or walk/swim).

This year ice conditions have been unusually heavy and even at this date in early June there is still ice all the way along the Labrador coast up to Baffin Island — a long walk to Baffin Island but probably not impossible for any bears that are still on the ice off NW Newfoundland or southern Labrador.

Canadian Coast Guard map of the bays of Newfoundland: