Posted on August 27, 2018 | Comments Off on Facts contradict predictions that Chukchi Sea polar bears should be in trouble

Last fall, there were persistent alarms raised about low levels of sea ice in the Chukchi Sea that were echoed this spring. But these low ice levels are not really a serious concern for these polar bears: a 2018 assessment found the bears were in excellent health with no declines in cub production or survival. Funny how little we hear about that. 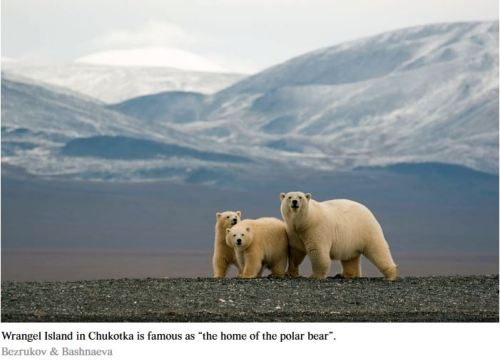 From “Military bases to open on Wrangel Island and Chukotka” 22 October 2015.

See a photo essay of Wrangel Island here and of the islands polar bears here and here.

While Western Hudson Bay bear numbers have declined slightly in number (by a non-statistically significant amount) and appear to have suffered some recent declines in cub survival (Dyck et al. 2017) (with unsubstantiated claims of declines in adult body condition), Chukchi Sea bears have not (Rode and Regehr 2010; Rode et al. 2013, 2014, 2018).

The fact that Chukchi bears are thriving while Western Hudson Bay bears appear to be struggling, given almost identical trends in sea ice decline, is a connundrum that polar bear specialist are loath to explain.

Only last week, it was announced that the quota for subsistence hunting of Chukchi Sea polar bears had been raised from 58 to 85 due to the excellent status of the population. Polar bear biologist Eric Regehr was quoted as saying:

“Chukchi bears remain larger and fatter and have not seen downward trends in cub production and survival, according to new preliminary information on the health and numbers of bears.”

So, despite warnings from the polar bear and sea ice “experts” that Chukchi Sea bears may be in dire straits due to recent sea ice declines (see below), it appears that the bears themselves are more resilient to changing conditions than the experts give them credit.

NSIDC sea ice experts cruising the Chukchi Sea took this photo of a polar bear in excellent condition a couple of weeks ago (early August 2018, A. Khan), despite the scary-looking melt ponds: 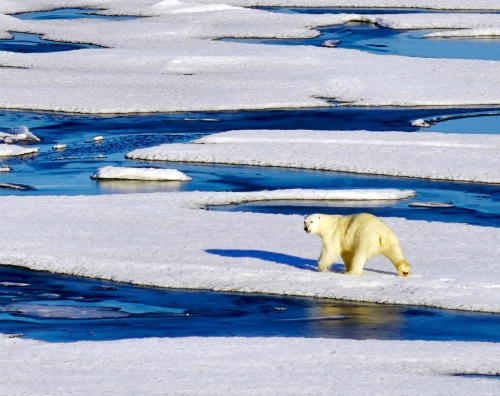 Wrangel Island is the primary land refuge for the few Chukchi Sea polar bears that don’t spend the summer on the sea ice — and for females that prefer to make their dens on land. It’s the most important denning area in the Chukchi Sea. Last summer, sea ice did not retreat from Wrangel Island until about 7 August (below): 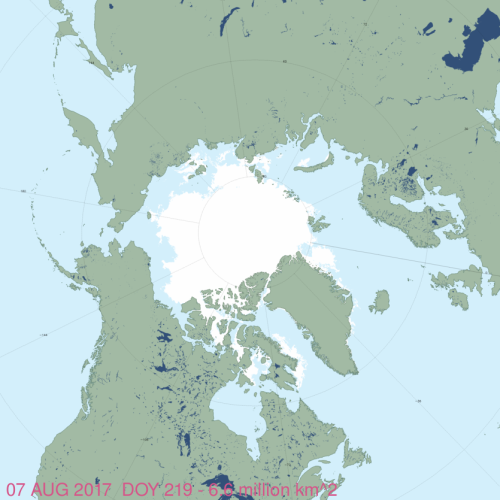 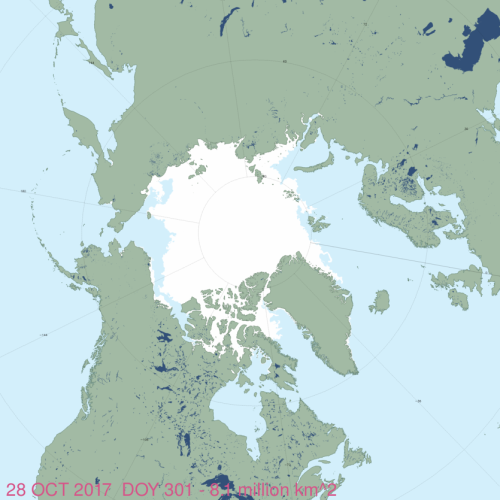 As of 19 November, the ice had returned to virtually all other land areas around the Chukchi Sea (below, upper panel), allowing the remaining few polar bears that might have spent the summer season onshore (such as on the Russian mainland and west of Barrow, Alaska) to return to the ice. This is true even though the ice extent coverage for the Chukchi Sea in general (below, lower panel graph) was the lowest it has been since 1979 for that date:

That means a few Chukchi Sea bears recently spent between 3 and 4 months on land, about one month less than Western and Southern Hudson Bay bears have been doing routinely, but Wrangel Island bears spent less than 3 months ashore.

Still, most Chukchi Sea bears spend their entire lives on the ice, including giving birth. That has continued to be true since 2007 despite major summer sea ice declines compared to the 1980s (Rode et al. 2018).

And this year?  The same pattern is repeating: as of 2 August 2018 (below), there was still just enough ice around Wrangel for bears that prefer to spend the summer there (or females who will eventually make their maternity dens there), to come off the sea ice. Some bears may have come off the ice earlier, but they were not forced to by retreating ice: 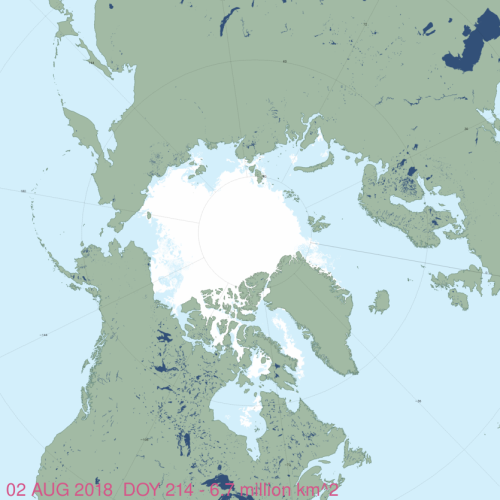 Research in the region continues to show bears are in excellent condition (much better than they were in the 1980s), with good reproduction and cub survival. Those factors almost always indicate a growing population — more bears — but you won’t hear polar bear specialists point this out to the media: they stick to repeated reminders that slight declines in body condition and cub survival portend a declining population.

In other words, despite predictions from polar bear specialists that Chukchi Sea bears (along with those in Western Hudson Bay) would suffer dramatic declines in abundance due to sea ice declines that have been the “norm” since 2007 (Amstrup et al. 2007; Crockford 2017), the facts are clear: Chukchi bears are thriving.