Posted on February 19, 2019 | Comments Off on Polar bears driven out of Novaya Zemlya town onto the ice by persistent harassment

The state of emergency in Belushya Guba on Novaya Zemlya is over, according to a report yesterday from the Russian news agency TASS (18 February 2019), as no bears had been spotted over the previous 24 hours. 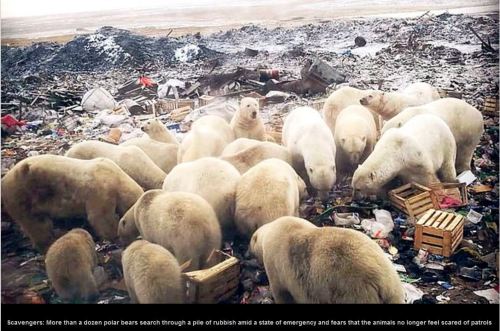 The report stated (my bold):

“A group of scientists and experts was airlifted to the archipelago on February 14 to deal with the problem.

“No bears have been spotted in Belushya Guba or around it for the past 24 hours,” the federal service said. “Their numbers have thinned out near the other settlements compared to the previous week,” the source added.

He said the bears had left once ice had amassed, and also due to the activity of a group that was chasing the bears away from local settlements.”

I guess it just took the kind of persistence that only soldiers can muster to convince the habituated polar bears to head back onto the ice. Read the rest here.

A polar bear lurks in Belushaya Guba. From The Daily Mail story, 11 February 2019.

Environmentalists said the influx of bears had been caused by the seasonal migration of animals and the availability of edible wastes in the island settlements.

Officials said extra fences were installed near schools to ensure the safety of children, and military and other security personnel had been carrying out patrols.

See my previous reports here (with ice charts from late November) and here.

It’s surprising to me that the incident seems to have been resolved without bloodshed, but the reports don’t actually say they didn’t have to resort to killing some of the bears.