A recent Netflix ‘Our Planet’ program with David Attenborough delivering a disturbing message of doom about walruses falling off a cliff to their deaths because of climate change is contrived nonsense on par with the bogus National Geographic starving polar bear video of 2017.  The walruses shown in this Netflix film were almost certainly driven over the cliff by polar bears during a well-publicized incident in 2017, not because they were “confused by a combination of shrinking ice cover and their own poor eyesight“. 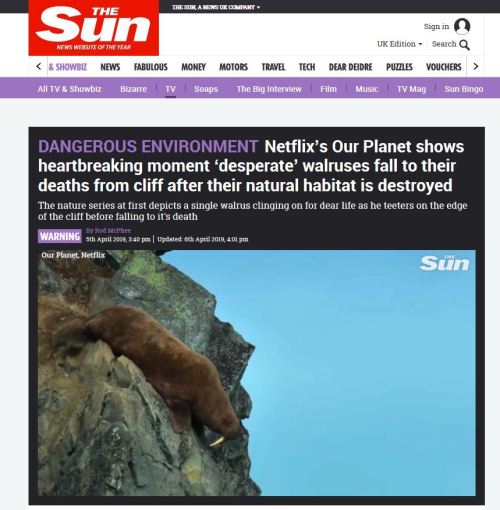 Apologies for neglecting to add, h/t to Charles the Moderator from WUWT!

UPDATE 8 April 2019: Falling off cliffs is not a new phenomenon. Here is video of US Fish and Wildlife officials in 1994 trying to explain a situation where walruses are falling even without the impetus from polar bears, at Cape Pierce in the southern Bering Sea (a haulout for adult males during the ice-free season). Explanation? Overcrowding (too many walruses)! h/t to Mark Sullivan.

Also, see this 8 April 2019 piece from The Atlantic that confirms the ‘Our Planet’ footage was filmed in 2017, and that “the sequence includes footage from two separate beaches—one with the 100,000-strong congregation and one with the falls.”

UPDATE 9 April 2019: For the details on why the two events described below (the one filmed by Attenborough’s ‘Our Planet’ crew and the event reported by the Siberian Times in 2017) are almost certainly one and the same, see Andrew Montford’s post at The Spectator. The Global Warming Policy Foundation has issued a press release.

UPDATE 14 April 2019: New details show that the film crew are still lying about the walrus death event in the Netflix ‘Our Planet’ episode, summarized by me here.

There are no precise details about the time and place of the incident shown in the ‘Our Planet’ film (see here or here), except that these were Pacific walrus “in the Russian Arctic” according to The Times (5 April 2019): “David Attenborough’s Our Planet: Walruses plunging to deaths become new symbol of climate change“.

However, even with only that information, a short Google search for walrus falling off cliffs in Russia reveals an incident from 19 October 2017 [at least, it was reported on that date: clearly the event occurred days to weeks before] that was reported by the Siberian Times: “Village besieged by polar bears as hundreds of terrorised walruses fall 38 metres to their deaths“.

In 2017, a group of about 20 polar bears, waiting for ice to form so that they could leave the village of Ryrkaypiy, stalked a herd of 5,000 or so walruses (see map below). The particular conformation of the region (see photo above) at Kozhevnikova Cape shows how frightened walrus could easily move from the beach (photo bottom left) to the top of the cliff (photo top right) along a gentle slope, and then be driven over the edge by fear or misstep. The bears were then able to feed off the many carcasses after the survivors took to the water. 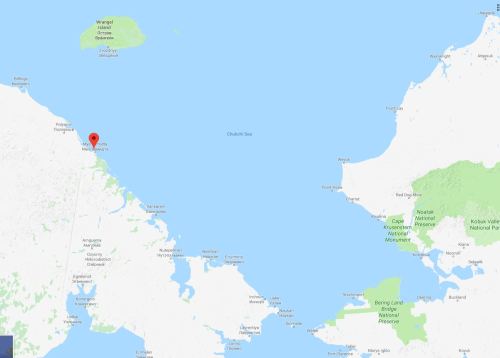 See my blog post from last fall about the situation in Ryrkaypiy, location marked on the map above. Ryrkaypiy has a walrus haulout location nearby and the few dozen polar bears from the Chukchi Sea subpopulation that spend the summer on shore waiting for sea ice to reform during the fall present safety problems for the villagers.

Here’s a quote from one of the stories on the 2017 incident, at Gizmodo (25 October 2017), which blamed the incident on climate change: “Polar Bears Drive Hundreds of Walruses Off Cliff in Siberian Bloodbath”

Climate change is having all sorts of bizarre and terrifying consequences in Siberia. Outbreaks of zombie anthrax, massive methane blowouts, that sort of thing. But the latest freak incident—in which hundreds of walruses hauled out on a shoreline, before tumbling off a cliff in terror at the sight of approaching polar bears—reminds us how changes can ripple across the food chain, throwing delicate ecological relationships out of whack.

The incident in question occurred near Ryrkaypiy, a tiny village located on the northern coast of Chukotka bordering the Chukchi Sea. According to a report by the Siberian Times, 5,000 walruses recently hauled out on a shoreline near the village. The walruses were followed by about 20 polar bears, no doubt drawn by the stench of thousands of blubbery, flippered meals.

The arrival of the bears caused the walruses to panic, and many attempted to flee. Per the Siberian Times, “several hundred” fell to their deaths off the cliffs of the nearby Kozhevnikova Cape. The bears, naturally, went to town on the carcasses.

“The situation is alarming,” Viktor Nikiforov, Head of Polar Bear Patrol at World Wildlife Fund Russia, told the Siberian Times in the understatement of the century. “Many [walruses] crashed, falling from a height.”

Kristin Laidre, a polar bear expert at the University of Washington, told Earther that while she has not heard about walruses falling off cliffs very often, “certainly polar bears will be attracted to any prey on shore during the ice-free season, even if it’s close to a village with people.”

Mikhail Stishov, Arctic Biodiversity officer for World Wildlife Fund Russia, told Earther that in the last few years “it’s been a pretty typical situation with huge haul outs on the shore line (due to ice cover reducing). Ryrkaypiy is one of the regular haul out sites.”

A handful of other sites along the Russian and Alaskan Chukchi coast have also started playing host to massive groups of walruses, as the nearshore sea ice they use to access shallow water food sources disappears. For the Inupiat village of Point Lay on Alaska’s North Slope, hundreds to thousands of walruses have become a regular late summer spectacle.

As the above shows, WWF was there to witness the event and provide opinion. A Mikhail Stishov, Arctic Biodiversity officer for World Wildlife Fund Russia and Head of WWF project Polar Bear Patrol, Viktor Nikiforov were there. And who does Attenborough direct distraught viewers to at the end of this particularly disturbing ‘Our Planet’ episode? Why, WWF, who would be only too happy to accept your cash donatations.

According to The Times story on the ‘Our Planet episode:

“The series has a strong conservation message and the plight of the walruses is regarded by the producers as the most powerful story they found during the four years of filming.”

Bottom line: This “powerful story” is fiction and emotional manipulation at its worst. Even if the footage shown by Attenborough was not the 2017 incident in Ryrkaypiy (or a similar one from another year or similar location), we know that walruses reach the top of cliffs in some locations and might fall if startled by polar bears, people or aircraft overhead, not because they are confused by shrinking sea ice cover. Walrus will not replace polar bears as an icon for global warming because neither is being harmed by reduced summer sea ice.

Journalist should have asked where and when this footage was shot, but they did not. The media are therefore complicit in perpetuating myths about walrus, sea ice, and polar bears in order to advance an agenda while providing free advertising for Netflix.

Note, the US Fish and Wildlife Service has determined that the Pacific walrus is not being harmed by climate change and are not likely to be harmed within the foreseeable future. The IUCN Red List (2015) said the Pacific walrus was ‘data deficient‘.  Here’s my post announcing the 2014 summary paper about the walrus haulout phenomenon (pdf here). My GWPF video is below and a list of previous walrus posts is here.