Posted on April 21, 2019 | Comments Off on ‘Our Planet’ film crew is still lying about walrus cliff deaths: UPDATE

I had an opportunity last night to watch the original Netflix ‘Frozen Worlds’ walrus episode and have some addition thoughts.

One big eye-opener was the final shot of the walrus sequence: a polar bear approaching from the water to feed on the carcasses below the cliff at Cape Kozhevnikov. This is additional proof that polar bears were in the area while the crew were filming. Yet the narrative in the film was silent on the risk to walruses on the cliff from polar bears and not a word was spoken of the hundreds of walruses that had fallen off that very cliff just days before after being spooked by approaching bears.

Oddly, I have also discovered that the Russian scientific advisor to the film, Anatoli Kochnev, wrote a scientific report in 2002 (translated into English) on walrus deaths at two regularly used beach haulouts on Wrangel Island from 1989-1996, when walrus population numbers were much lower than today and summer sea ice extent was higher (Kochnev 2002). He concluded that stampedes initiated by polar bears were responsible for most of the walruses found trampled to death.

This means Kochnev knew that polar bears nearby were a huge risk factor for walrus stampedes over the cliff but went along with the official ‘Our Planet’ narrative that no polar bears were involved and only lack of sea ice and poor eyesight were to blame for the carnage presented in the Netflix film.

In addition, a Google-translated photo-essay published by Kochnev’s friend Yevgeny Basov who had been invited to witness the spectacle at Cape Kozhevnikov in the fall of 2017 (posted 11 November 2017, original link here)(h/t WUWT commenter “it doesn’t add up”). The metadata on the photos in this essay shows that Kochnev was there on 16 Septmber 2017 (photo #2) and that walruses were already dying from falls off the cliff on 17 September (photo #22, see below), two days before the ‘Our Planet’ footage was shot.

This is almost certainly the event reported in The Siberian Times, when 20 polar bears were said to have spooked walruses at the top of the cliff, with hundreds fell to their deaths on the rocks below. 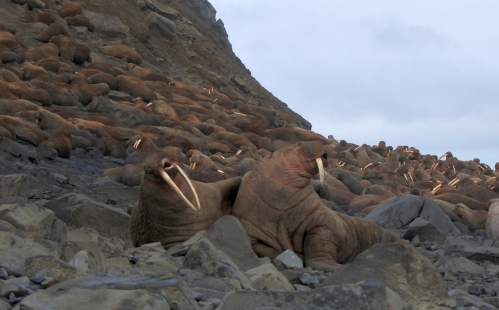 Two walruses dying from a fall off the cliffs. Photo by Y. Basov, 17 September 2017.

Finally, a series of three photos taken by Basov of walruses on the cliff making their way back down the way they had gone up shows them descending safely to the beach on 21st September (see below), showing they knew how to get down without throwing themselves off the top. 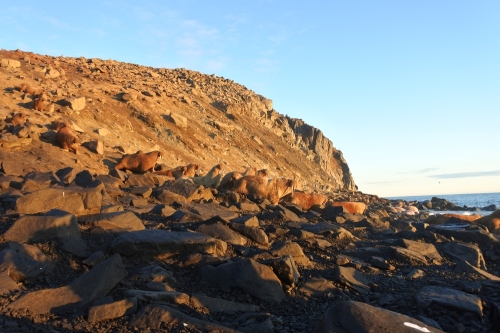 Walruses descending safely to the beach from the cliff. Photo by Y. Basov, 21 September 2017.

The path of the walruses descending to the beach is very near the spot the cameraman was positioned on 19 September filming a few falling walruses (below), which bolsters Andrew Montford’s speculation that the filmmakers, unwittingly or not, may have contributed to the panic that sent a few more walruses over the cliff, which they duly captured on film. I counted 4, possibly 6 falling in the original film sequence yet the narrator claimed hundreds died. Odd, that.

A WWF submitted ‘Behind the Scenes’ trailer (different from the “Digital Exclusive” trailer promoted by Netflix, see footnote 4 below) has footage of science advisor Kochnev with two polar bears on the cliff while the crew were filming: