Posted on July 8, 2019 | Comments Off on First polar bear spotted off the ice in Western Hudson Bay is fat and healthy

One of the first of hundreds of polar bears expected to come off the sea ice of Hudson Bay along the west and south coasts was captured on video on 5 July. This is only the first wave, as there is still so much ice remaining that most of the bears are likely to remain offshore: not because there is so much food available (few seals are caught at this time of year) but because the ice is where they are most comfortable. 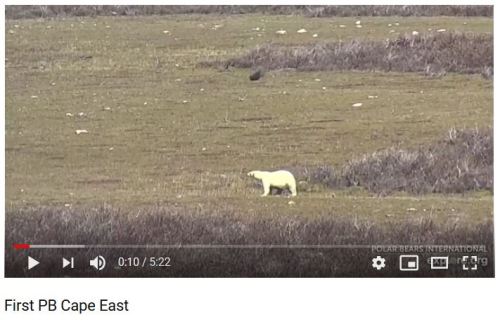 Note that polar bear specialist Andrew Derocher tweeted just this morning (8 July 2019) that one or two of the 22 bears he and colleagues put collars or ear tags on earlier this year registered as onshore on 6 July at Cape Churchill, see map below. That’s only 9% of his sample: most of the marked bears are still well offshore (note this map shows only ice >50% concentration, so there is much more ice that bears can use as resting stops if they chose to swim to shore). Most of the population comes ashore south of Churchill: 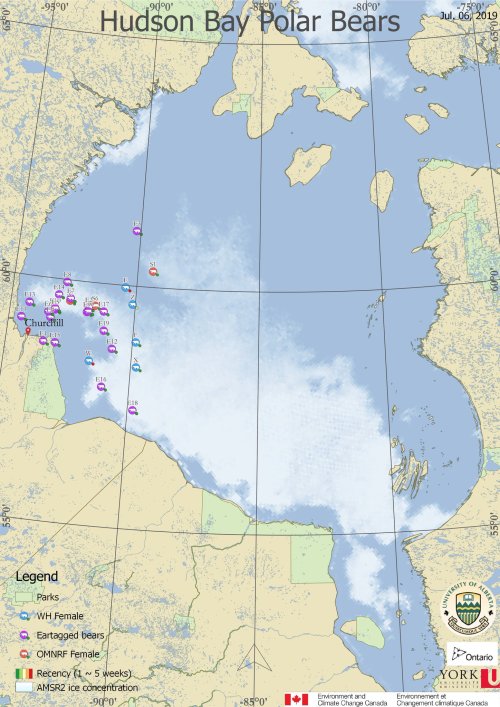 One of these first polar bears ashore for the 2019 season at Cape Churhill was capture on video: note how fat she is! Captured by the Explore.org live polar bear cam (see the comments section). It’s hard to tell but she appears to have a collar (I get a glint of an indentation on her neck), which would make her one of Derocher’s bears.

Ice over the entire bay on the same date: