Posted on December 17, 2019 | Comments Off on European outrage over my loss of adjunct status and video of my Dutch school lecture

I’ve been home for just over 3 weeks now but even with all the demands on my time from family, friends, colleagues, and the media that I had to put off while I was away, I didn’t want to miss setting down a few final thoughts about my speaking tour across Europe. See previous posts here and here. 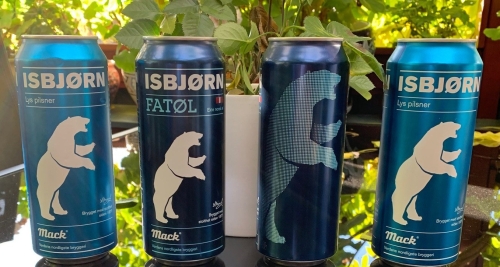 Polar bear beer had a prominent place at the post-conference dinner in Oslo.

Firstly, sincere thanks to all of you who donated so generously after hearing the news in mid-October that my adjunct appointment at the University of Victoria had been cancelled – a similar outpouring of outrage and moral support was echoed throughout my trip across Europe. Knowing those funds were available made an enormous difference, especially for things like roaming charges on my phone (Canadians pay some of the highest cell phone fees in the world), which meant I was able to conduct a number of radio interviews on-the-fly – including one with Glenn Beck – taxis (because after my hip replacement in June, my hip muscles were simply not up to all the walking), and a few unforeseen expenses.

The Oslo conference (‘Natural Variability and Tolerance‘) was simply awesome: I met so many people I had previously known only through emails, scientific papers, or internet mention. Australian Peter Ridd was there to talk about issues with the health of the Great Barrier Reef and the similarities of our treatment by our respective universities was not lost on anyone: there can be a huge cost to academic professionals for speaking out about the abuse of science that’s going on in the name of ‘climate change’. The meeting was well organized and very well attended, the press showed up (I believe I was on the evening TV news), and I autographed many books – a fabulous introduction to the climate realists of Europe. Isbjørn beer was the cherry on top – as far as I know, even Canada doesn’t have a dedicated polar bear brew (correct me if I’m wrong!).

UPDATE: Apparently (I’ve been informed via email from John), a Quebec microbrewery has a polar bear on its logo. However, I contend it’s not quite as distinctly ‘polar bear beer’ as the Norwegian variety.

In The Netherlands, Cyril Wentzel of The Green Audit Foundation (De Groene Rekenkamer) arranged for me to speak to 110 senior high school students (15-16 year olds) of biology teacher Marjo Jongkind at the Lyceum Ypenburg in The Hague. The kids were great; Ms. Jongkind was thrilled with the presentation and so was her supervisor.

I’m posting it here because it’s typical of my talks to schools, including the ones in Victoria that got me run out of academia. It’s information kids need to counter the hype and fear being fed to them by conservation activists of all stripes.

In Germany (22-23 November), even though the EIKE conference in Munich had to be relocated to another venue at the last minute because the original conference centre buckled under the bullying of a local activist organization, it went ahead without further problems. We had strict security as well as police protection (see below) but everyone carried on as planned. The simultaneous translation and the food were wonderful and there were some great science presentations. I very much enjoyed talking with Nir Shaviv and Henrik Svensmark over dinner. Congratulations to organizer Wolfgang Mueller for pulling this off and many thanks for including me! 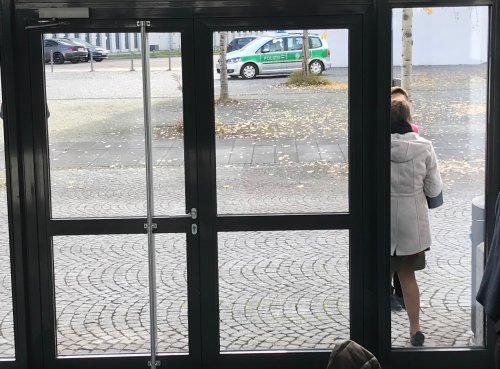 Police parked outside the conference venue in Munich during the EIKE conference.

Finally, here is a copy of the polar bear bumpersticker I was giving away at my lectures, as the essence of my take-home message. Designed by my artist son-in-law, the sticker measures 6.6″ x 3.8″ (168 x 97 mm) and the text is simple: “thriving” in seven European languages (English, Norwegian, Dutch, German, French, Scots Celtic and Irish). 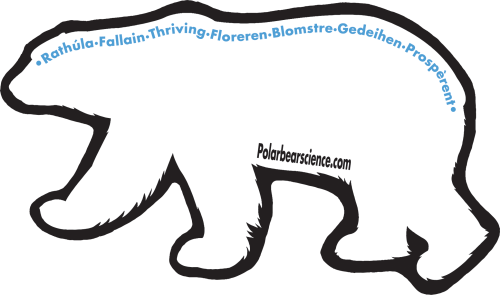