Posted on July 20, 2020 | Comments Off on New model of predicted polar bear extinction is not scientifically plausible

Apparently, a prediction that polar bears could be nearly extinct by 2100 (which was first suggested back in 2007) is news today because there is a new model. As for all previous models, this prediction of future polar bear devastation depends on using the so-called ‘business as usual’ RCP8.5 climate scenario, which has been roundly criticized in recent years as totally implausible, which even the BBC has mentioned. This new model, published today as a pay-walled paper in Nature Climate Change, also did something I warned against in my last post: it uses polar bear data collected up to 2009 only from Western Hudson Bay – which is an outlier in many respects – to predict the response of bears worldwide. The lead author, Peter Molnar, is a former student of vocal polar bear catastrophist Andrew Derocher – who himself learned his trade from the king of polar bear calamity forecasts, Ian Stirling. Steven Amstrup, another co-author of this paper, provided the ‘expert opinion’ for the failed USGS polar bear extinction model featured in my book, The Polar Bear Catastrophe That Never Happened.

Well, these authors and their supporters got the headlines they crave, including coverage by outlets like the BBC and New York Times (see below) but I have to say that the combination of using out-of-date Western Hudson Bay information on when polar bears come ashore in summer and leave for the ice in fall (only to 2009) to make vague projections (‘possible’, ‘likely’, ‘very likely’) about all other subpopulations in addition to depending on the most extreme and now discredited RCP8.5 climate scenario (Hausfather and Peters 2020) for this newest polar bear survival model is all that’s needed to dismiss it as exaggerated-fear-mongering-by-proxy. Why would anyone believe that the output of this new model describes a plausible future for polar bears? 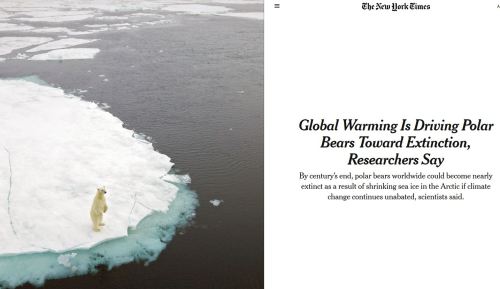 Meanwhile, polar bear populations worldwide continue to thrive despite declines in sea ice. And as I have pointed out on numerous occasions, the ice free period for WH has not continued to decline since 1998 but rather has remained stable (with yearly variation) at about 3 weeks longer than it was in the 1980s (Castro de la Guardia et al 2017). Moreover, for the last five years at least, including this one, the ice-free season for WH bears has been better (only 1-2 weeks longer than the 1980s), although no official data on this phenomenon has yet been published. Oddly, this more recent data for Hudson Bay was not used for the Molnar model.

In addition, this year, the first polar bears off the ice in Western Hudson Bay are at least two weeks later than they have been in recent years: Andrew Derocher’s first tagged bear came to shore 17 July 2020 (see below): 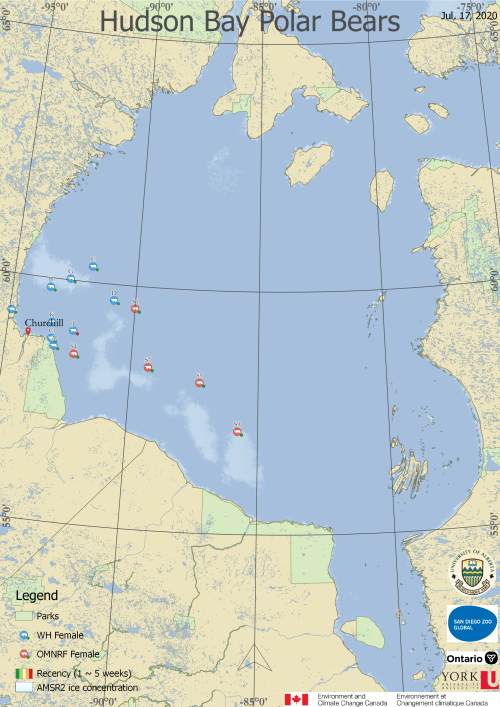 The first tag-free bear spotted onshore at Wakusp National Park south of Churchill by live webcams was caught on film 13 July (see video below and notice how fat it is). Other photos over the last few days show very fat bears and cubs just off the ice. All of this means that the mean date of all bears off the ice this summer will almost certainly be early August – as late as it was in the 1980s.

The lead author of this new paper (Molnar et al. 2020), Peter Molnar, has written something similar before. He concocted a model for Western Hudson Bay polar bear survival a decade ago (Molnar et al. 2010) that predicted 28-48% of male polar bears in WH would die if climate change caused the fasting period to be extended from the 120 days (4 months) that were usual during the 1980s to 180 days (6 months) sometime in the future. A colleague of his put together a similar model generating similar results a couple of years later (Robbins et al. 2012), which I wrote about here.

Here is a quote from the methods that shows even their preferred polar bear vs. sea ice data for WH could not be used without fiddling with it because it didn’t fit their assumptions of what the bears should be doing (my bold):

“…we assumed that fast duration is linked to the annual number of ice-free days in each subpopulation region. We computed the ice-free season from observed and modelled daily sea-ice concentrations, and linked our estimates to reported annual migration dates of polar bears in the Western Hudson Bay subpopulation to ensure that each year’s first and last fasting day were defined from a polar bear’s perspective.

The ice-free season was defined as the period when the extent in a subpopulation region is below a critical value. Our choice of this critical extent was based on when polar bears in the Western Hudson Bay subpopulation were observed to arrive on-shore (leaving the ice) in summer and depart the land (returning to ice) in autumn. The migration dates were assessed from bear locations tracked by satellite-linked radio collars in 1991–2009, as reported in ref. 38 [Cherry et al. 2013]. The mean days of the year of bear on-shore arrival and departure to sea ice were 212 [31 July] and 329 [25 November], respectively (averaged across all bears in all available years from 1991–2009; Extended Data Fig. 2). However, according to Extended Data Fig. 1, the mean sea-ice extent in Western Hudson Bay on day 212 was extremely low (3.8% of the annual maximum in the years 1991–2009), suggesting that bears may have lingered on a few persistent clusters of small, highly ridged floes, which could provide cover for aquatic stalks, before giving up on the ice and coming ashore. In contrast, on day 329, the extent was 48.5% of the annual maximum in 1991–2009 in the Western Hudson Bay subpopulation region [i.e. they know bears leave for the ice as soon as its 5-10% ice-covered].

Because ice extent differed substantially between bear arrival and departure dates, we chose one critical extent that is a compromise between the two, and computed times when extent first crosses the critical value for three consecutive days in summer and fall (Extended Data Fig. 1). Then, because the fasting period is defined as the number of days between the bears’ on-shore arrival in summer and their departure to sea ice in autumn, we adjusted the days of the year when critical extent is crossed by constant offsets to match the mean observed arrival/departure (and hence fast initiation/cessation) dates in the Western Hudson Bay subpopulation (Extended Data Fig. 2). In essence, offsets at the start and end of the ice-free season are estimates of how long bears will linger on the last persistent floes after the extent has fallen below the critical value, and of how long it takes the bears to return to the ice after it rises above the critical value. We sought a critical extent that allows a small offset in the autumn (consistent with polar bears eager to get back on the sea ice after a long fast) and a moderate offset in summer (suggesting that polar bears continue on-ice foraging for as long as possible).

Hausfather, Z. and Peters, G.P. 2020. Emissions – the ‘business as usual’ story is misleading [“Stop using the worst-case scenario for climate warming as the most likely outcome — more-realistic baselines make for better policy”]. Nature 577: 618-620