Posted on November 25, 2020 | Comments Off on Polar bear habitat update for late November

Sea ice formation is ahead of usual in some regions and behind in others but overall, sea ice habitat is abundant enough for this time of year for virtually all polar bears across the Arctic to be back out on the sea ice hunting seals. 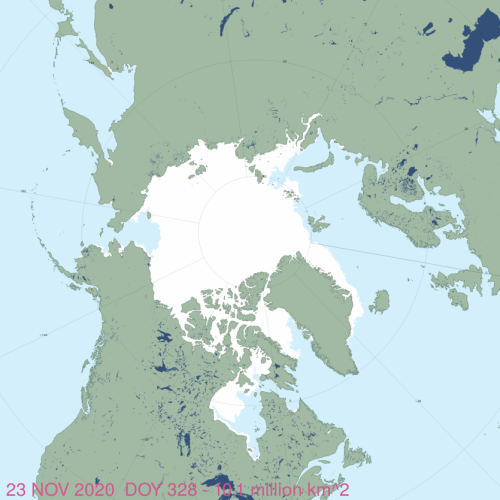 Overall, there was more sea ice at 24 November 2020 than there was on the same date in 2016, which was the last year that a number of polar bear subpopulations were surveyed, including Western and Southern Hudson Bay, Southern Beaufort, Chukchi Sea (Crockford 2019, 2020), see graph below from NSIDC Masie: 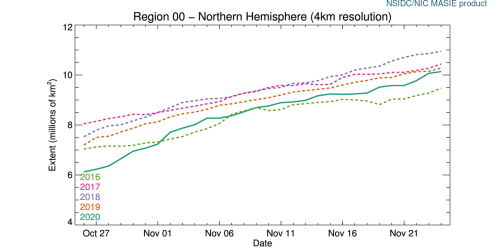 The pattern of ice formation over Hudson Bay has been a bit unusual this year because winds blew a big chunk of ice offshore part-way through the freeze-up process. Also, freeze-up came earlier than normal. Aside from noting that one bear with a tracking collar was on the ice at 16 November, polar bear researcher Andrew Derocher has been silent as to the locations of the rest of his collared bears until this morning, when he published a chart dated 23 November showing that half of the eight bears that are likely not pregnant females are on the ice (see below). The other four will stay onshore in dens to have their cubs later this year. 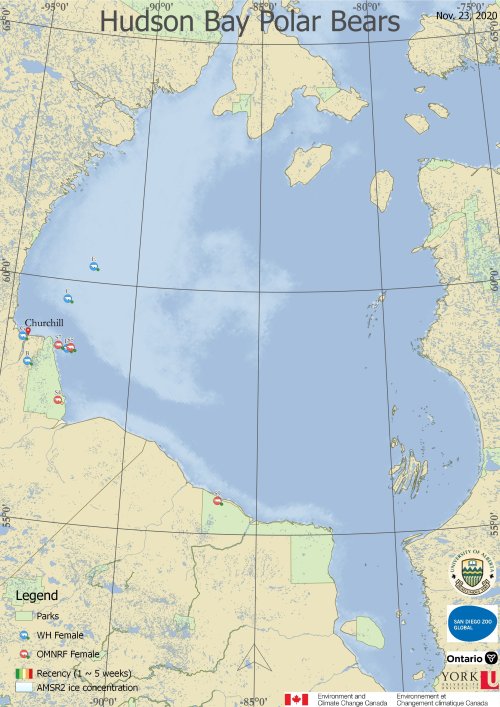 Of course, knowing these bears are all offshore now doesn’t tell us when they actually left shore – as far as we know, they went on the ice 17 November (the day after Derocher’s first announcement). Regardless, Derocher falsely implied in his tweet this morning that the situation at 23 November supported his claim that this was “not an early freeze-up.”

Except that by all independent measures, including ice charts, reports from eyes-on-the-ground, and photos of bears hunting on the ice, freezeup this year was early even for the 1970s and 1980s (Castro de la Guardia et al. 2017; Stirling et al. 1977). Many bears (but not all) were out on the ice hunting by the first few days of November (see chart below), which would have been earlier than usual in the 1980s (when the average date for bears to leave was 16 November). A few stragglers stayed behind, including Derocher’s collared bears, apparently in no obvious hurry to get on the ice.

The Canadian Ice Service chart of ‘departure from normal’ for Hudson Bay shows there is a lot more ice than usual in the middle of the bay and south into James Bay (all that blue!). In contrast, there is much less ice than usual in northern Hudson Bay and Davis Strait (off southern Baffin Island), shown in red and pink.

A study by Castro de la Guardia and colleagues (2017: Figure 3) determined that  the earliest freeze-up dates since 1979 for Western Hudson Bay came on 6 November in 1991 and 1993. As the ice charts from CIS archives (below) show, there was about as much ice off the shore of Western Hudson Bay in 1991 for the first week of November as there was this year (chart above).  In other words, Derocher saying this wasn’t an early freeze-up year does not make it so.

In 1993 (below), there was much more ice in the north of Hudson Bay than this year in early November but not any more along the west coast, where polar bears congregate waiting for the ice to form:

Two weeks later, the amount of ice cover over Hudson Bay is impressive for this time of year, according to ice present for the week of 23 November (below) – this chart shows the actual amount of ice cover rather than the anomaly. The ice is forming quickly.

So, I’d say it’s no wonder polar bear experts have not published ‘official’ breakup/freezeup dates for polar bears since 2015 (Castro de la Guardia et al. 2017) –  freezeup has been average (2017) or earlier than average (2018-2020), for the last four years in a row. Although in 2016 freeze-up was very late, we know that occasionally a very late freezeup year happened, as it did in 1983, even before claims were made that man-made climate change was the regulator of all Arctic ice (Ramsay and Stirling 1988).

The latest two reports from the Polar Bear Alert Program in Churchill (for weeks 11 and 12, November 2-8 and 9-15) were finally published online today but neither of them mention the state of the ice. But given no report appears to have been published this week and the low number of incidents in week 12 (4 ‘occurrences’) and the number of bears in the holding facility (PBHF) at the end of last week (0), it looks like the report for 9-15 November (below) was the last of the season. 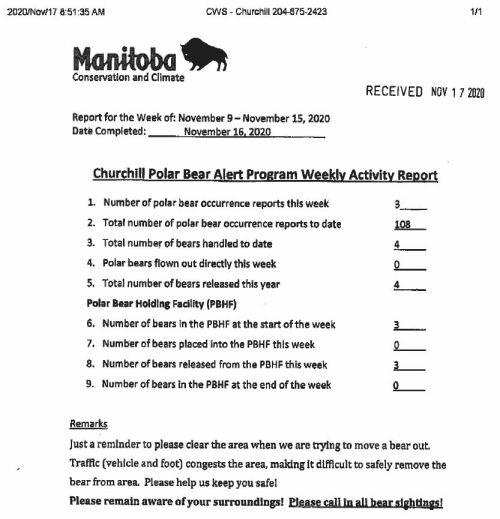 UPDATE 27 November 2020: Problem bear report published today (for week 13, Nov. 16-22) is added below, indicating a few bears still have not left for the ice despite its abundance. 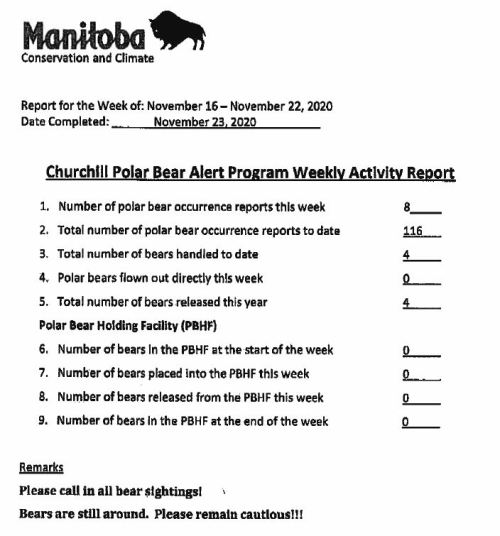 For comparison to the above, see the last problem bear report for 2017 (below): 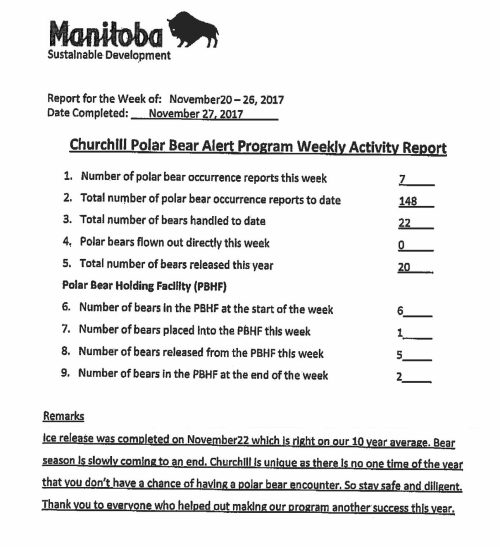 The Beaufort Sea has been largely ice-covered since the third week in October (in contrast, in 2012 this didn’t happen until mid-November). Currently, shorefast ice is forming rapidly along the shores of the Bering Sea but ice from the Chukchi Sea has not yet moved south through the Bering Strait. Wrangel Island, where many Chukchi polar bear females have their cubs, was reached by the advancing ice pack by 11 November. 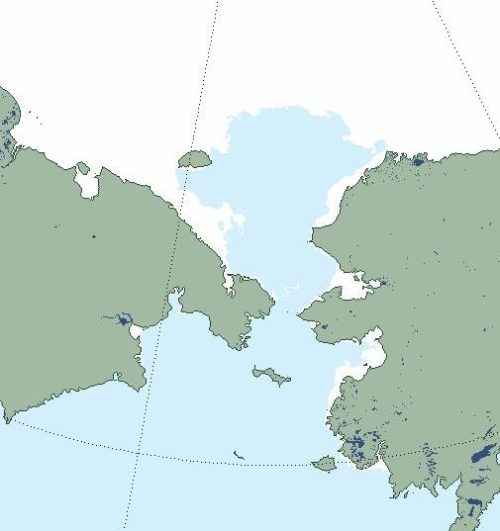 On the Russian coast, the Laptev and East Siberian Seas have been completely ice covered in ice since early November (below) after rapidly forming shorefast ice met up with slowly advancing the pack ice this fall. 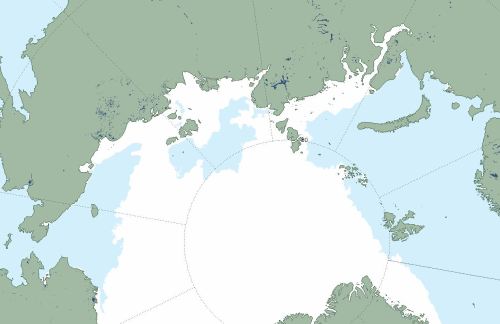 Franz Josef Land in the eastern Barents Sea has now got substantial ice cover after a slow return of the Arctic ice pack. However, the Svalbard archipelago in the western Barents is still ice-free, as it has been for many years now at this point in the fall (except last year). As a consequence, most Barents Sea pregnant female polar bears will choose to make their maternity dens on the mobile pack ice to the north or on one of the islands of Franz Josef Land. 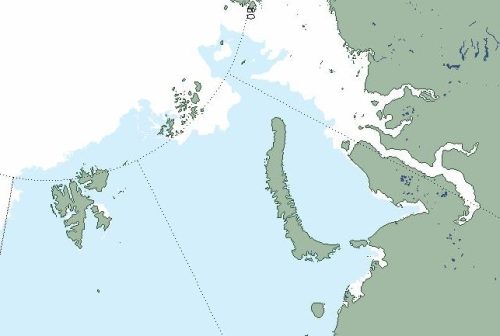 There is little ice in eastern Kara Sea at this point in the season, especially around Novaya Zemlya, but that has been the case for this region since the late 1990s at least. A graph of ice cover over the Kara Sea for the last five years (NSIDC Masie, below), shows that 2020 was only the second lowest in recent years after 2016. 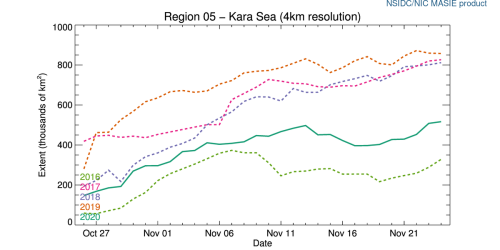