New report: Change coming to the Canadian Arctic — but it’s no looming catastrophe

Posted on April 29, 2020 | Comments Off on New report: Change coming to the Canadian Arctic — but it’s no looming catastrophe

A review of a newly-released (22 April 2020, on Earth Day) report commissioned by Canada’s Department of Fisheries and Oceans on the state of the Arctic seas published today in the National Post is a must read. It highlights the report’s emphasis that while the changes going on in our northern seas are indeed marked, they do not necessarily spell doom. 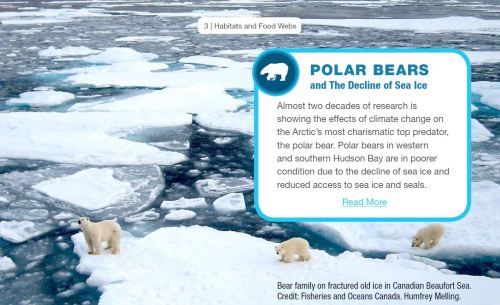 Oddly, polar bears are primarily represented in the report by an overview account of the special case of Western Hudson Bay – an outlier among Canadian subpopulations – that puts special emphasis on the claimed decline in body condition blamed on recent sea ice changes that is not supported by any recent data (Crockford 2020).

END_OF_DOCUMENT_TOKEN_TO_BE_REPLACED

Comments Off on New report: Change coming to the Canadian Arctic — but it’s no looming catastrophe

Posted on October 12, 2013 | Comments Off on Beluga whales frolic in the High Arctic

It’s Thanksgiving weekend here in Canada. As a special treat, I thought I’d point you in the direction of a delightful bit of video footage of beluga whales.

If you haven’t seen this Arctic Watch Beluga Foundation clip already, it’s worth a few minutes. It’s footage of belugas and their calves frolicking in the shallow water of Cunningham Inlet, on Somerset Island, Nunavut (within the Lancaster Sound polar bear subpopulation, which is north of the Gulf of Boothia subpopulation region that I discussed previously here and here).

While I previously surmised that Gulf of Boothia polar bears might hunt beluga from remnant ice during the summer in years when the ice doesn’t totally melt (like they do in Hudson Bay, see belugas as food for hungry polar bears), it appears they also successfully hunt beluga in shallow waters like those found in Cunningham Inlet. But there is no hunting footage in this post.

Link and further info below, including a map and references on beluga, and polar bear predation on beluga in this region.

END_OF_DOCUMENT_TOKEN_TO_BE_REPLACED

Comments Off on Beluga whales frolic in the High Arctic