Posted on March 1, 2019 | Comments Off on Polar bear prowling small Labrador town cut off by storm had authorities on high alert

From CBC News late yesterday (28 February 2019) comes the news that a polar bear seen skulking around the homes of a small coastal town in Labrador this week has had residents on edge and authorities on high alert. If tragedy struck, the St. Lewis road was blocked by snow and the only way in or out was by helicopter. Message: polar bears are highly dangerous and a bear prowling a community is a very real threat to safety. 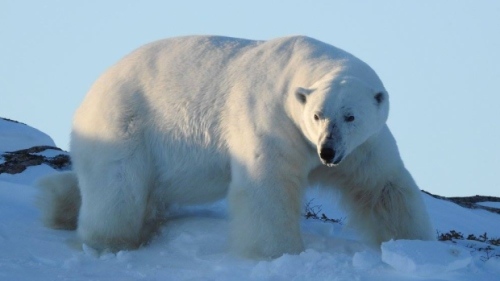 According to a CTV News follow-up, while the road to St. Lewis was cut off because of a recent snowstorm for most of the week, wildlife officers were able to get in today (Friday 1 March). Sighting about 100km north in Charlottetown earlier in the week are believed to be the same bear.

The last sighting of the animal was Thursday morning (28 Feb), so the bear may now have left of its own accord. No one seems to have captured a photo.

However, the fear felt by residents of St. Lewis (population 200) in this story is palpable, especially after the terrifying visuals from the well-publicized invasion by more than 50 polar bears at Belushaya Guba on Novaya Zemlya last month. 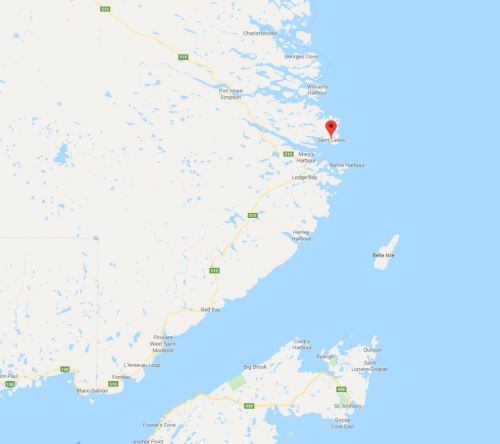 St. Lewis is located at the red marker; Charlottetown is the third town to the north. Both are just north of the Strait of Belle Isle that separates Labrador from the island of Newfoundland.

END_OF_DOCUMENT_TOKEN_TO_BE_REPLACED

Posted on February 20, 2019 | Comments Off on Bear on shore in January that threatened residents of Foxe Basin community was shot

According to a report by CBC News earlier this week (18 February 2019), there was a defence kill of a potentially dangerous polar bear and her cub in Foxe Basin, Nunavut on January 4th that we are just hearing about now. Yet another bear on shore in winter, when there is plenty of sea ice, looking for food in an Arctic community and threatening the lives of its residents while a polar bear specialist blames such incidents on lack of ice. 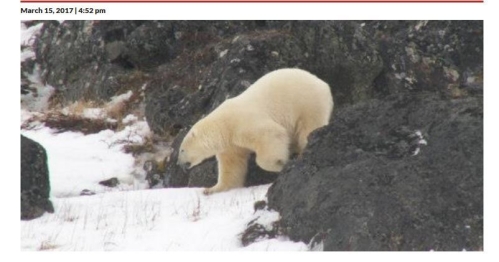 END_OF_DOCUMENT_TOKEN_TO_BE_REPLACED

Posted on February 1, 2019 | Comments Off on Two polar bears onshore in coastal Labrador, one relocated for public safety

Just in (VOCM, 1 February 2019) from a community called Makkovik on the coast of Labrador: one of two bears sighted prowling the local dump has been relocated for public safety. The community is still on high alert until the other bear can be located. 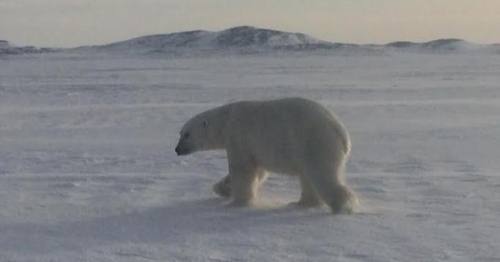 Polar bears are extraordinarily dangerous at this time of year because they are usually at their leanest weight and can be desperate for food of any kind. See the most recent example here, others here and here (with references).

See below for a map showing the location of Makkovik, population about 360.
END_OF_DOCUMENT_TOKEN_TO_BE_REPLACED

Comments Off on Two polar bears onshore in coastal Labrador, one relocated for public safety

My last post, on the up-coming International Bear Conference in Anchorage, presents the perfect backdrop for highlighting a wonderfully unbiased review of my polar bear attack thriller, EATEN, penned by a prominent Canadian polar bear researcher who is utterly convinced that future sea ice loss is the biggest threat to the species (and a former student of the grand-daddy of all polar bear researchers, Ian Stirling). 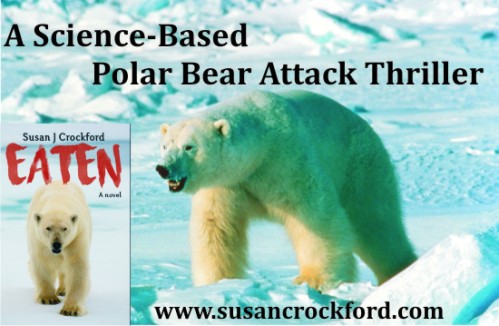 Here is what polar bear-human interaction specialist Douglas Clark had to say about my novel in his Amazon review (note I did not send Doug a review copy because he did not request one – he bought it himself – so I had no idea this was coming):

His detailed thoughts on the book below.
END_OF_DOCUMENT_TOKEN_TO_BE_REPLACED

Posted on December 6, 2015 | Comments Off on Paris climate change deal will not stop polar bears dying due to thick ice in spring

Thick spring ice due to natural causes is currently the single biggest threat to polar bears. Not declining summer sea ice – thick spring ice. That could change in the future but right now, the evidence supports that statement.

Polar bear deaths due to cyclical changes in Arctic sea ice thickness in the spring have continued despite rising CO2 emissions and declining summer sea ice extent (last major incident, 2004-2006): there is no reason to expect this will not continue. Unwarranted attention on summer ice extent has deflected attention from this major cause of local polar bear population decline.

Sea ice models do not address past or future changes in spring ice thickness and predictive models of polar bear survival blame all population declines on summer sea ice declines despite strong evidence to the contrary (Crockford 2015: The Arctic Fallacy). END_OF_DOCUMENT_TOKEN_TO_BE_REPLACED

It’s still based on the same flawed ecological premise as all previous models – it assumes that sea ice was a naturally stable habitat until human-caused global warming came along. It also uses slight-of-hand maneuvers to correlate declining summer sea ice and declining polar bear population numbers. 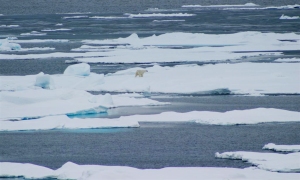 Just because they keep repeating the same hype doesn’t make it true.
END_OF_DOCUMENT_TOKEN_TO_BE_REPLACED