The official population estimates generated by the IUCN Polar Bear Specialist Group (PBSG) give the impression that the global total of polar bears has not changed appreciably since 2001:

However, some accounting changes were done between 2001 and 2009 (the latest report available) that mean a net increase in numbers had to have taken place (see summary map below and previous post here. Note this is a different issue than the misleading PBSG website graphic discussed here).

And while it is true that population “estimates” are just that — rather broad estimates rather than precise counts — it is also true that nowhere do the PBSG explain how these dropped figures and other adjustments were accounted for in the estimated totals.

The simple details of these changes are laid out below, in as few words as I could manage, to help you understand how this was done and the magnitude of the effect. It’s a short read — see what you think.

UPDATE 15 May 2016: In late November 2015, the IUCN Red List of Threatened Species published a new assessment for polar bears that estimated the global population at 22,000-31,000 and stated the trend was ‘Unknown’. See details here and here – which includes links to the official report and the press release. Sorry for the delay in updating this post.

UPDATE 5 December 2014: Links to more recent posts relevant to this issue added below. [including this one: Status of Canadian polar bear populations has been changed – more good news October 28, 2014 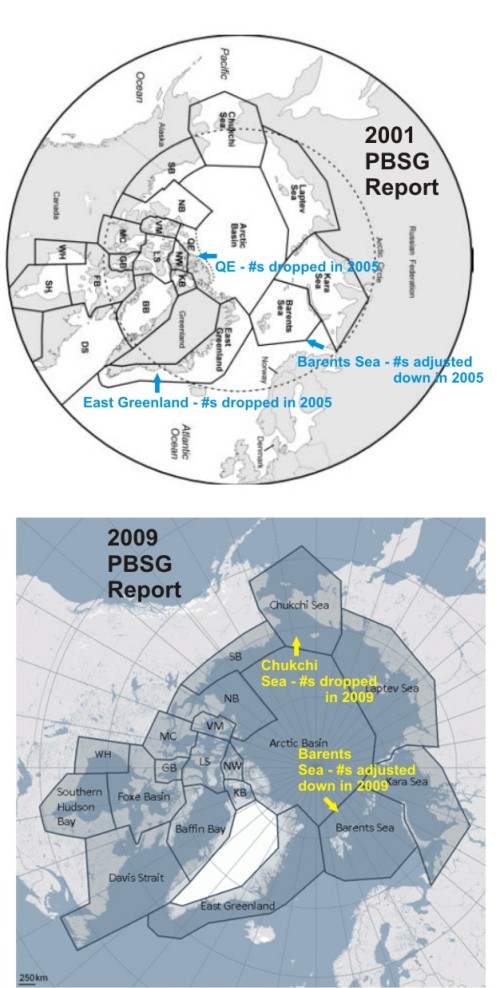 Changes in the early 2000s
Between 2001 and 2005 the ‘Queen Elizabeth Islands’ region in northern-most Canada (see map above) was dropped altogether as a distinct subpopulation (along with its estimated 200 bears) and the tentative total of 2,000 bears estimated for ‘East Greenland’ was also dropped (from both minimum and maximum portions of the “21,500-25,000” range).

That means between 2001 and 2005, due to accounting and ‘upgrade’ changes only, a total of 1,200 bears was removed from the minimum portion of the global estimate and 3,200 removed from the maximum portion of the global estimate, changes that had nothing to do with documented declines in subpopulations. These changes were all the result of differences in the way the data was presented (or not).

This means there must have been a net increase of 300-3,200 bears (average 1,750) among the remaining subpopulations during the early 2000s. A comparison of the tables suggests these increases occurred in the Lancaster Sound, Gulf of Boothia and Davis Strait subpopulations.

Changes in the late 2000s
In 2009, the tentative total of 2,000 bears estimated for the ‘Chukchi Sea’ subpopulation was dropped – from both the minimum and maximum total estimates – because it was deemed not accurate enough: “2,000” became “zero,” even though bears are well known there (see previous posts here and here).

[Now, the Barents Sea estimate is not the only subpopulation estimate that was ‘adjusted’ from one number to another based on the same survey data, but since we are tracking the Barents Sea figures from a “guess” in the 2001 report to a scientific estimate in 2009, it’s important to include this final adjustment]

As a consequence, because the global estimate did not change between 2005 and 2009, there must have been another net increase of 2,350-2,500 polar bears among the remaining subpopulations in the late 2000s.

In summary, in order for the worldwide estimate of polar bears to have remained virtually unchanged since 2001, the global population must have increased by 2,650-5,700 bears (average 4,175) between 2001 and 2013. These increases did not off-set the slight declines in other subpopulations, as the unchanging totals imply, but were in addition to them.

In other words, it appears that the global population of polar bears could not have remained stable since 2001 – it had to have increased by an average of almost 4,200 bears!

UPDATE 5 December 2014: Links to more recent posts relevant to this issue added below.