As I outlined earlier this week, Canadian Inuit objected so strenuously to routine mark-recapture methods used by polar bear biologists during the early days of a Foxe Basin population study in 2008 that the work was abandoned and an aerial survey done instead.

In this post, I’ll examine how the polar bear biologists involved reacted to that crisis, which they called a “control of research” issue.

In a published version of a conference paper, co-authored by two of the original investigators of the Foxe Basin mark-recapture study, Lily Peacock and Andrew Derocher (Peacock et al. 2011:374), had this to say:

“Control of research is a developing source of conflict. In recent years, some permits for management-oriented research on polar bears were denied by the Government of Nunavut, local hunting and trapping organizations in the Northwest Territories, and by Makivik Corporation in Quebec. Furthermore, in a 2009 resolution, Inuit Tapiriit Kanatami opposed the capture of polar bears throughout Canada (available by request from http://www.itk.ca), even though the application of physical marks is one of the most effective methods of population estimation. Co-management is particularly difficult in Nunavut because of the large number of subpopulations (12), which makes it difficult to fund and conduct research.” [my bold]

They raised an interesting point – since the Government of Nunavut has the power to insist biologists do more than reiterate that their way of counting bears is the only acceptable way, and because the government can deny permits to projects that don’t measure up, it can lock out traditional polar bear research for virtually all of Canada (the vast majority of Canada’s 13 subpopulations are in Nunavut, see Fig. 1), especially since aboriginal organizations in the Northwest Territories and Quebec have followed Nunavut’s lead.

Figure 1. Territory covered by the Government of Nunavut (top, Wikipedia) and the 13 polar bear subpopulations in Canada (bottom, Environment Canada).

That means if polar bear researchers can’t find a way to make their research mesh with Inuit concerns, they’ll be out of work in Canada. Let’s take a look at their approach and see how well it worked for them — explaining in part the new prominence of aerial surveys for population assessments.

A rather clear expression of the frustration felt by the biologists involved in the Foxe Basin research comes across in a presentation given by Lily Peacock in 2009 at a Wildlife Research meeting in Rankin Inlet, Nunavut (Peacock et a. 2009, pdf here). By this time, the permit for field work that year had been denied and an aerial survey to replace it had begun.

It’s clear to me Peacock certainly tried to address Inuit concerns in a respectful way but I don’t know that she really hit the mark with her audience. Personally, I thought it was rather patronizing.

She insisted that while she understood the community had objections, this was simply how the work had to be done regardless of what they thought. She then tried to plead that mark-recapture needed to be done along with aerial surveys to validate its accuracy, despite their objections.

Have a look at a few of her slides below (Fig. 3-5), paying attention to the fine print – those appear to be her speaking notes. I’ve transcribed the first one because it is impossibly small. 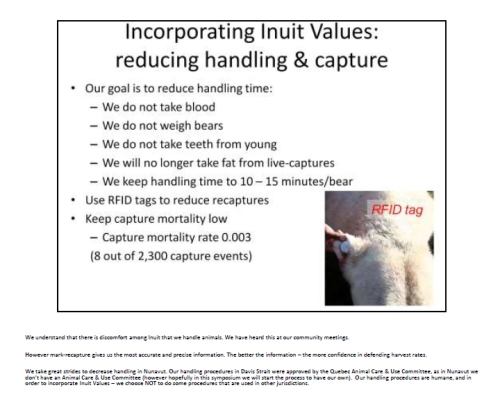 Figure 3. Lily Peacock and colleagues explain their proposed mark-recapture polar bear work at a Wildlife Research meeting in Rankin Inlet, Nunavut (Peacock et al. 2009). This is slide 17. Peacock’s speakers notes, in tiny print below the slide, are transcribed below.

“We understand that there is discomfort among Inuit that we handle animals. We have heard this at our community meetings.

However, mark-recapture gives us the most accurate and precise information. The better the information – the more confidence in defending harvest rates.
We take great strides to decrease handling in Nunavut.

I noticed that nowhere in her presentation was there a promised not to do two of the things that strike me (and perhaps Inuit also) as particularly disrespectful, evidenced by the two photos below: taking advantage of a bear’s tranquilized state to use it, or its cubs, as “photo ops” that would not be possible with a conscious bear.

I began this post with a quote from the 2011 paper by Peacock, Derocher and colleagues (Peacock et al. 2011: 374) – here is what continues after the paragraph quoted above, where they give an example of their battle for control over research (sorry, it’s a long quote):

Conflict in perspectives of how research is conducted on polar bears and how the results are applied to management has become a conservation concern. Here we review the harvest of polar bears in Baffin Bay, a subpopulation shared between Canada and Greenland, as a case study that elucidates the roles of multiple stakeholders and exemplifies current controversies. Although a population inventory for Baffin Bay was completed in 1997, a report was not published in the peer-reviewed literature until 2005 (Taylor et al. 2005). This report, which provided a population estimate of 2074 ± 266 (mean ± SE) bears with an annual sustainable harvest of 88 bears, was followed by extensive public consultations regarding harvest levels. In 2005, polar bear harvest was increased in Nunavut from 64 to 105 bears/year (Stirling and Parkinson 2006), based on survival and recruitment data (Taylor et al. 2005) and assumptions of a low harvest in Greenland. It was soon clarified that the annual harvest in Greenland, where no quotas had been in effect, was much higher than previously recognized. Consequently, the Baffin Bay subpopulation was determined to be declining (IUCN/SSC PBSG 2006), and in 2006, Greenland responded by introducing a quota system and reducing harvests (IUCN/SSC PBSG Resolution 2009; available from http://pbsg.npolar.no/en/meetings/, accessed 16 June 2010). During a second round of community consultations in Nunavut in 2008, data and scientific simulations suggesting the Baffin Bay subpopulation was in decline were considered by local groups and the co-management board as being too old to be used in decision making (NWMB 2008), even though the study was highly quantitative and the trend was supported by evidence of declining sea-ice habitat (Stirling and Parkinson 2006) and declines in body condition of polar bears (Government of Nunavut, unpublished data).

Inuit participants in the 2008 public hearings about Baffin Bay expressed gratitude for the recent changes in co-management structure; many indicated that it was now no longer possible for government to unilaterally make decisions that affected their social, cultural, and economic interests (minutes of NWMB public hearing 2008). Furthermore, most, but not all local Inuit expressed that there were more bears in the region (Dowsley and Wenzel 2008). Thus the annual quota for polar bears in Baffin Bay was not reduced and harvest remained at levels that were identified as unsustainable according to the existing data. Subsequently, Greenland’s detrimental finding under their CITES process banned export of hides from Greenland, and the European Union banned import of Baffin Bay polar bear hides from Canada. In 2010, in advance of the 59th meeting of the Standing Committees of CITES, Canada similarly imposed a ban on export of polar bear parts from Baffin Bay. At this CITES meeting, the USA presented a proposal to up-list the polar bear to Appendix I, which would have resulted in a complete ban on international trade of polar bear hides. Just before this meeting, 12 years after the data were collected and after a third round of public hearings, Nunavut announced a harvest reduction in Baffin Bay over 4 years to the pre-2005 level (64 bears). In this case, the management and research system, created to incorporate the diversity of knowledge on polar bears and increase local participation, was unable to efficiently produce research, effectively integrate local and scientific perspectives, or render a decision in a timely fashion. Decision makers did not consider the negative changes in sea-ice habitat observed since 1997 when the demographic data were collected (Stirling and Parkinson 2006), or the predicted future changes in habitat. In this case, the performance of the research and co-management system was unsatisfactory to Inuit, the wider Canadian and international public, wildlife managers, and scientists. [my bold]

The biologists might be right about that final sentence, but whose fault is it?

They imply the Government of Nunavut made bad decisions in the Baffin Bay case and that scientists were proven right because Nunavut reduced the quota in response to bullying by the international community, not because there had been a demonstrated reduction in the population size caused by overhunting.

To me, this approach smacks of lip-service to the concept of “co-management.” The biologists really just want to do things their way. They want the last word — which means ultimate control. There is some of that in the Inuit position as well.

It’s a tricky situation, to be sure. I am a zoologist and understand the desire of polar bear biologists to collect detailed information but their stance here seems unduly rigid and doomed to failure when Inuit are just as determined to gain back some of the control they’ve lost over previous decades. I don’t see it as being truly resolved anytime soon.

We may have seen the end of polar bear mark-recapture studies in Canada but that doesn’t mean that population assessments aren’t being done. Aerial surveys seem to be the new standard, even outside of Nunavut.

1.This review is part of the virtual symposium “Flagship Species – Flagship Problems” that deals with ecology, biodiversity and management issues, and climate impacts on species at risk and of Canadian importance, including the polar bear (Ursus maritimus), Atlantic cod (Gadus morhua), Piping Plover (Charadrius melodus), and caribou (Rangifer tarandus).