A video being hyped around the internet – “Witness a polar bear’s heartbreaking swim for ice in the Arctic” said one headline – is simply shameless propaganda, facilitated by the US Geological Survey and its polar bear biologists. USGS scientists involved in this work should be ashamed of themselves.

Take a swim with a polar bear family as they traverse the Arctic Ocean in search of sea ice.

This is a load of nonsense and a total misrepresentation of the facts.

In addition, the text added to the video is pure propaganda: it is being used to promote the US government position that sea ice loss due to climate change is a massive threat to polar bears. Unfortunately, recent studies contradict the contention that polar bears have already been harmed by declines in summer sea ice.

Here are some background to the video you should be aware of:

1) The bears were swimming away from the USGS researchers and film crew who had shot them full of sedatives and attached a camera to one of their necks — they were not swimming toward sea ice 100 miles away.

2) The video was shot in the Bering Sea, in April 2014, when sea ice was about its maximum extent of the year — there was lots of ice around when this video was filmed.

3) The company doing the filming is using this video as a fundraiser.

Details below, including a sea ice map for April 2014.

Andy Revkin at the New York Times DotEarth blog promotes it as something spectacular (as he did a couple of weeks ago with an earlier offering from the same team, June 10), admitted in the comments section in response to someone who said it looked like these bears were being harassed by a boat:

“The cameras are on bears that were sedated (which counts as a kind of harassment, yes, but is part of a broader research project; see the earlier post linked from this one).” 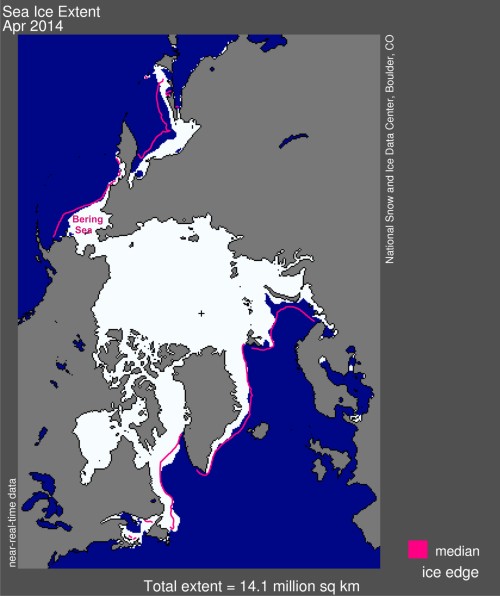 “To learn more about the Arctic Exploration Fund visit:
http://www.arcticbearproductions.com&#8221;

Here is the stated mandate of Ravetch’s NGO:

“Arctic Exploration Fund, AEF, is a non profit 501c 3 whose mission is to arm wild animals around the world, with groundbreaking new cameras, who go out and gather multiple hours of footage of their own lives, which we track using on-board satellite GPS, and together create a brand new natural history archive filmed entirely by the animals themselves.”

Nothing there about deliberately misrepresenting the facts shown in the film footage and using the video for propaganda purposes.

Finally, shame on the USGS: its work in the Bering and Beaufort Seas is being promoted as scientific polar bear research (like collecting blood samples), yet the real products being generated are propaganda videos.